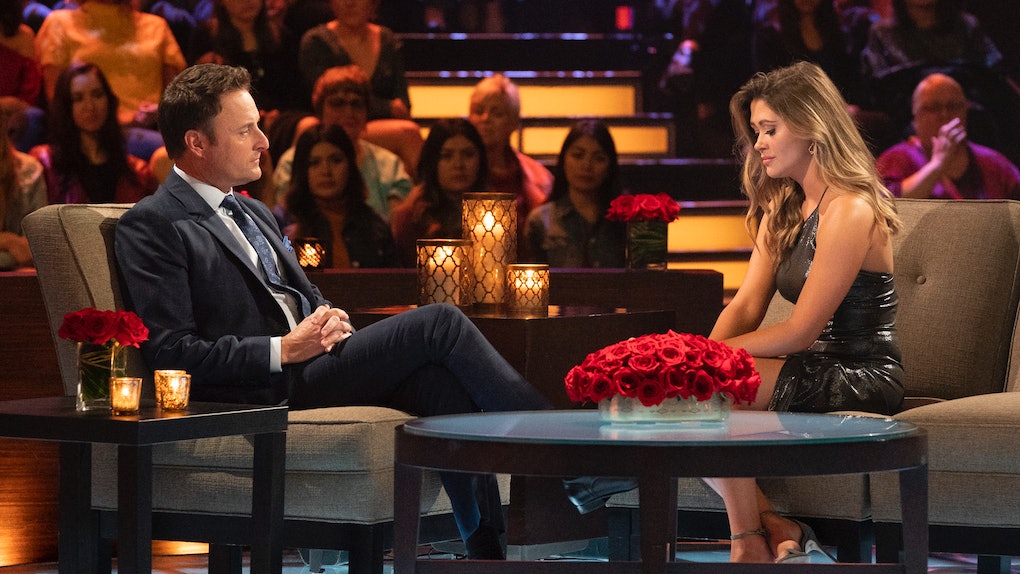 This season of The Bachelor may have broken some kind of record for the amount of drama packed into one season. From dredging up beauty pageant drama to women arguing about their ages, the ladies have had plenty of ups and downs, and more than enough to discuss during "Women Tell All." But, perhaps no other issue was a bigger deal this season than the rumors that some women we more interested in being the next Bachelorette than in ending up with Colton. Katie and Caelynn's argument about her Bachelorette comment on "Women Tell All" gave Bachelor Nation some more details about what exactly went down.

When Colton sent Katie home, she left him with some ominous parting words. As they hugged goodbye, she told Colton, "You have a great group of girls. Some are ready, and some aren’t. Just be smart about those girls.”

At the time, it wasn't entirely clear who Katie was talking about, until the drama intensified later when Tayshia got involved. Tayshia told Colton that she didn't believe that Cassie and Caelynn were on the show for the right reasons. Tayshia explained that while in Singapore, Katie had heard Caelynn and Cassie talking about what they would do if either of them became the next Bachelorette. Fans didn't know any more about what exactly Katie had overheard... until "Women Tell All."

According to Katie, during a bus ride in Singapore, she overheard Caelynn and Cassie talking about how they'd love it if one of them won and if one of them were to be the next Bachelorette. Based on both that conversation and others she overheard, Katie drew the conclusion that Caelynn was more interested in traveling and sliding into other guys' DMs than in Colton. She took that to mean that Caelynn and Colton had different values and warned Colton that he should be careful.

But Katie and Caelynn really butted heads on "Women Tell All" when they started arguing about a post-show phone conversation they had. Katie said that she talked to Caelynn on the phone afterward and Caelynn admitted to the Singapore bus conversation. Caelynn confirmed that the conversation did happen, but insists it was more innocent than her fellow contestants were portraying it to be.

After Caelynn denied the bus conversation went down the way Katie said it did, Hannah B. came to Katie's defense. Now, Hannah B. taking Katie's side over Caelynn might have a bit more to do with the ongoing feud she has with Caelynn from their Miss USA days, but it still only added to the confusion of trying to figure out who's telling the truth.

It's hard to tell what really happened on that bus in Singapore, or what exactly Katie and Caelynn talked about on the phone afterward. But, what is clear is that Caelynn is clearly still hurt over her breakup with Colton. Whether or not she also wants to be the Bachelorette, Caelynn was blindsided when she was sent home and even talking about it on "Women Tell All" seemed hard for her. She told People, “I’m not fully over it. I’m still processing the heartbreak.”