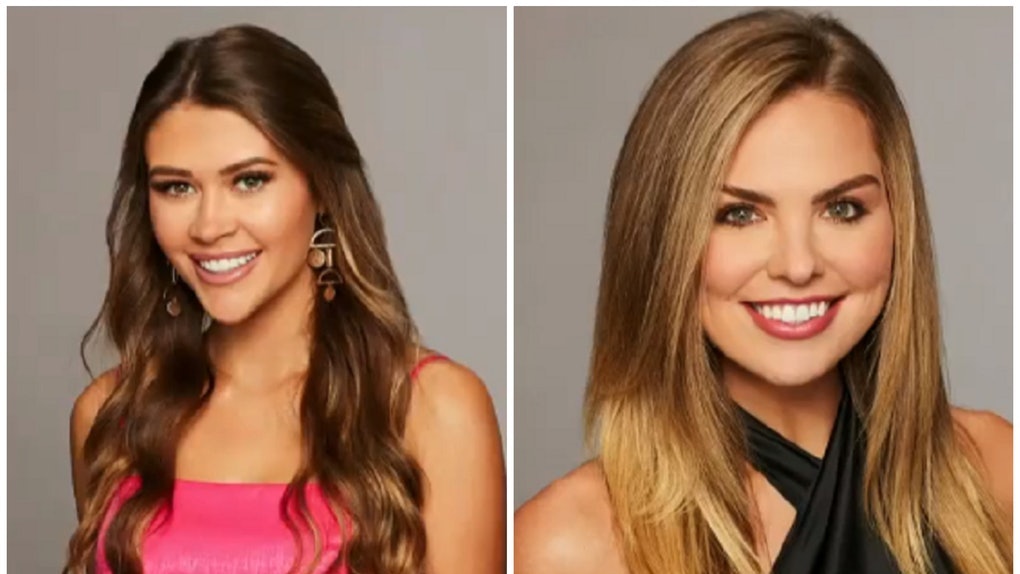 What Happened Between Caelynn & Hannah B.? The 'Bachelor' Girls Have A Complicated Past

The drama is already heating up in this season of The Bachelor, as the ladies' pasts are being brought into the present. Turns out Caelynn and Hannah B. have a complicated past from their time competing for Miss USA against each other. Now that they're competing for Colton, the rivalry has gotten even more tense. As Caelynn and Colton have gotten closer, Hannah B. has been watching and worrying that Colton's not seeing the real Caelynn that she knows from their pageant past. But what happened between the two of them?

In the 2018, Miss USA pageant Caelynn competed as Miss North Carolina and was named first runner-up, while Hannah B. was Miss Alabama and didn't make it to the final round. Not only did they compete at the same time, but they also roomed together throughout the whole competition and appeared to be close friends. Caelynn even called Hannah B. a sister in some Instagram posts. But, in last Monday's episode, Caelynn said:

We’re not necessarily the best of friends. We were roommates at Miss USA. We were super close, and then she wasn’t happy that I was first runner-up. She was mad that she didn’t place, for sure. There were a lot of hurt feelings. With Hannah, there’s a façade and then it starts to crumble. Hannah kind of snapped; she flipped a switch. I was like, 'Wow, this is a whole new Hannah.' Being in this environment, it’s pretty similar. I have no doubt that switch will be flipped soon. It happened pretty quickly.

From Caelynn's perspective, it sounds like Hannah B. started a lot of the tension between them because of her jealousy. But Hannah B.'s side of the story is a little different. She's said that she thinks Caelynn is not who she appears to be. In last week's episode, she told Hannah G.:

It’s just so funny because there’s not one person in the world that I have a problem with, except her. It totally scares me for Colton … she’s fake.

In fact, Hannah B. feels so strongly that Colton needs to be careful about Caelynn, that she talks to Colton privately to warn him about her in this Monday's episode. A lot of fans had some major feelings on Twitter about Hannah B.'s warning to Colton.

When Colton asked Caelynn about the drama between Hannah B. and her, Caelynn said that she and Hannah B. "handle competition differently," while Hannah B. told Heather that they had a lot of "petty girl drama." So perhaps their issues are just a matter of two very different personalities clashing.

The Miss USA pageant took place in May 2018, and filming for this season of The Bachelor began only a few months after that. So that gave the ladies only a short amount of time to decompress from their pageant fight. No wonder they were still feeling hurt from the pageant, since it was still fresh in their memories.

In Monday's episode, just as Hannah B. pledged to put her drama with Caelynn behind her, Caelynn told Colton that Hannah B. is filled with "manipulation and deceit" and is a "toxic" person. Colton asked Caelynn about it, and Hannah B. defended herself by saying that Caelynn is not showing her true self. All of it left both fans and Colton confused about who to believe.

No matter who is right or wrong in this complicated drama, it's for sure intensified now that Caelynn and Hannah B. are roommates again – and this time they're rooming in a mansion with 20 other women all fighting for the same guy. While it must be hard for Caelynn, Hannah B., and Colton, the drama is definitely fun to watch, as some fans on Twitter have noted.

While Caelynn and Hannah B. fight, Colton is having a tough time figuring out who to believe, and he said that he's feeling "caught off guard." Both ladies received roses in Monday's episode, so hopefully he'll be able to work through the Miss USA drama to figure out if either of these women is the one for him.