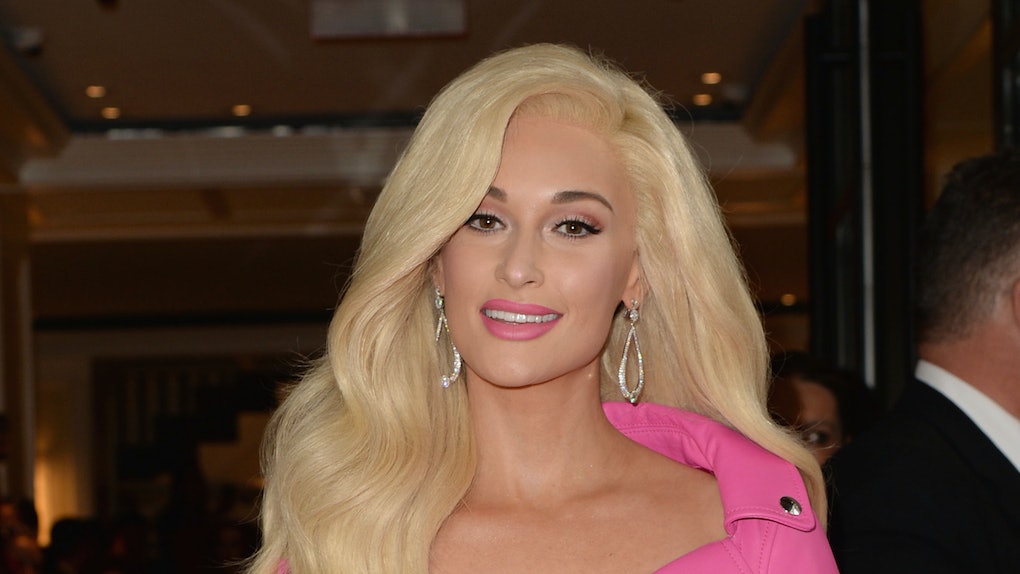 When Kacey Musgraves hit the Met Steps last night, I half expected the Aqua song "Barbie Girl" to suddenly start blaring from the speakers. ICYMI, Kacey Musgraves' Met Gala 2019 Barbie-inspired look was everything fans could have wanted and more, but at the same time, nobody saw it coming. The country-pop diva has been slaying carpets left and right this award season, but given her affinity for a good tulle ruffle, I was pretty sure I had her Met Gala dress all figured out in my head (It looked something like the dress Emma Roberts did wear, if you're curious.). Boy, was I wrong! Musgraves shocked everyone and served a complete Mattel fantasy, with a Barbie-pink Moschino dress and spot-on doll-like accessories.

Despite the fact that pink isn't the official color of "camp" — in my mind, it's gold, and to be more specific, a gold lamé — almost everyone who hit the carpet wore the hue in some iteration, from hot fuschia to girly bubblegum. Even the traditionally-red carpet was a sweet shade of pink, so anyone wearing the color had to go above and beyond to not blend in. Musgraves did just that, obvi, and her look had everyone talking.

She was a Barbie girl in a Barbie world, so to speak:

I was living for this look! Ken dolls everywhere fell in love the second she hit the steps:

This Moschino look was to die for, in every single way. The hot pink, floor length, leather jacket-inspired dress, the long pink fur, the Barbie-esque cat eye sunnies and the pink hair dryer-shaped purse — swoon.

And I know Musgraves loves a good wig, but this blonde is above and beyond:

Celebrity stylist Giovanni Delgado used Davines products to style the wig to doll-level perfection, aka not a hair out of place. Of course, Twitter users went wild for this look. A few called her the Elle Woods of the Met Gala, but many were quick to detect her true inspiration: the Moschino Barbie, of course.

Every detail of her homage was on point:

And fans were living for the campiness of the doll-like moment:

Oh, and BTW, she arrived in a pink convertible, because how else would Barbie get around in NYC?

To get that perfect pink lip was a major mission for Lee, and she had all hands (And lipsticks!) on deck to get it just right:

Lee ended up going with a combination of two Pat McGrath Labs MatteTrance Lipsticks ($38, sephora.com), in shades "Polaroid Pink" all over and "Extravaganza" around the edges.

Talk about nailing the theme! Musgraves look was camp to the max, but in a weird way, still fit her personal brand perfectly. Like, who else is incredible enough to literally become the Moschino Barbie? No one, that's who. End of discussion.