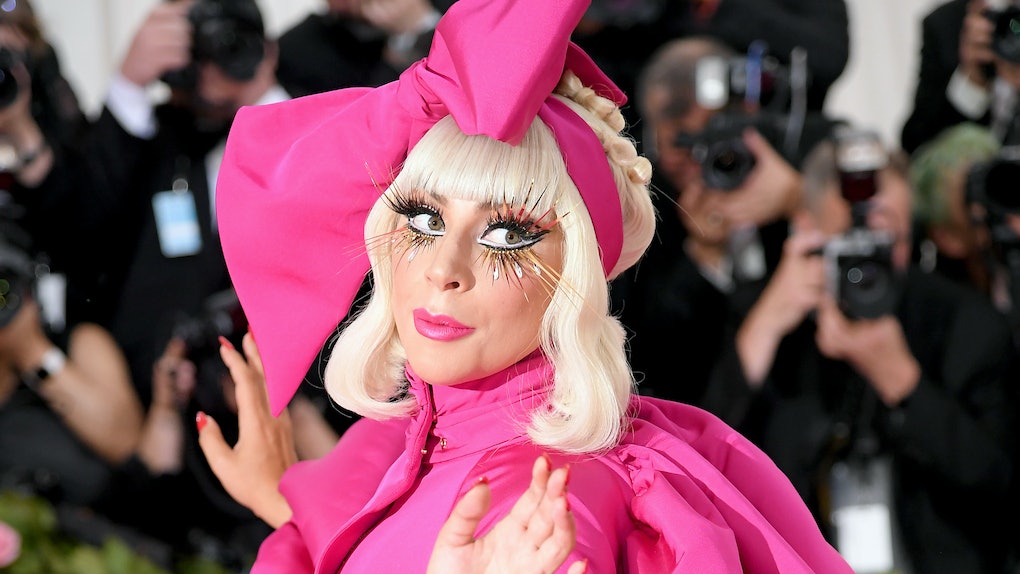 These Lady Gaga 2019 Met Gala Memes Are So Extra, Just Like Her Pink Carpet Looks

Go home, everyone attending the 2019 Met Gala who isn't Lady Gaga. There's no point. Mother Monster crushed the red (or pink) carpet this year when she arrived in a Russian doll-like ensemble that revealed layer after layer of fabulousness. Her pink, then black, then pink, then black again look lit up social media and had monsters all over the globe hyped to comment on their queen. The Lady Gaga 2019 Met Gala memes that have come out of the event are truly treasures.

Here's what you need to know going into this: This year, the 2019 Met Gala theme is "camp," and no, I definitely don't mean sleeping in the wilderness in a tent. The theme came from the Metropolitan Museum of Art's exhibition featuring Susan Sontag's seminal 1964 essay Notes on ‘Camp'. In the essay, Sontag described "camp" as the "love of the unnatural: of artifice and exaggeration . . . style at the expense of content . . . the triumph of the epicene style." To put it in millennial terms, it means extra, aka, Lady Gaga all the freaking way, baby.

Vogue broke down Gaga's big entrance, which reportedly actually began two whole blocks away on Madison Avenue in New York City. Gaga reportedly strolled from there, in her ten-inch heels, followed by a slew of dancers carrying umbrellas. Naturally, the performance didn't stop when she arrived — nay! — it just began. Gaga walked up and down the steps at least three different times, turning around to pause and undress to show a new outfit underneath each time.

The look was designed by Gaga's long-term close friend, Brandon Maxwell, who accompanied her throughout the whole shebang. Apparently, the first look's train was 25 feet long. (NBD.) Maxwell also had the honor of helping Gaga unwrap her now iconic bows to reveal her second black dress with a snazzy hip detail. After that, Gaga stripped down to a neon pink column dress, which was followed by her final lace and fishnet lingerie look at the end.

For some reason, she also dragged a hot pink cart full of champagne. I don't make the Gaga rules and I don't ask the Gaga questions.

Meanwhile, social media was living for/dying for it and the meme gods smiled on us all. The hilarious commentary and feedback that came from Gaga's big entrance was almost as fun as the entrance itself!

Check out some of these memes:

There's no telling what Gaga wore for the rest of the evening once she was inside the event, but I wouldn't put it past her if she put the whole thing back ON to chow down on her expensive AF dinner. According to E!'s live reporting, tables could cost as much 300,000 dollars, which I think requires a four-piece Gaga gown, don't you?

Honestly, thank you for everything, Gaga. If you could give us a little live stream or bathroom selfie, that'd be great. No pressure. Just some pressure. A reasonable amount of pressure. Thanks!

More like this
These Tweets About Jimmy Fallon's TikTok Dance Follow-Up Segment All Say It's Too Little, Too Late
By Brandy Robidoux
The Meaning Of Queen Elizabeth's Brooch At Prince Philip's Funeral Was Very Sweet
By Abby Monteil
Why Did Addison Rae Deactivate Her Twitter? Fans Think This Is The Reason
By Brandy Robidoux
Stay up to date