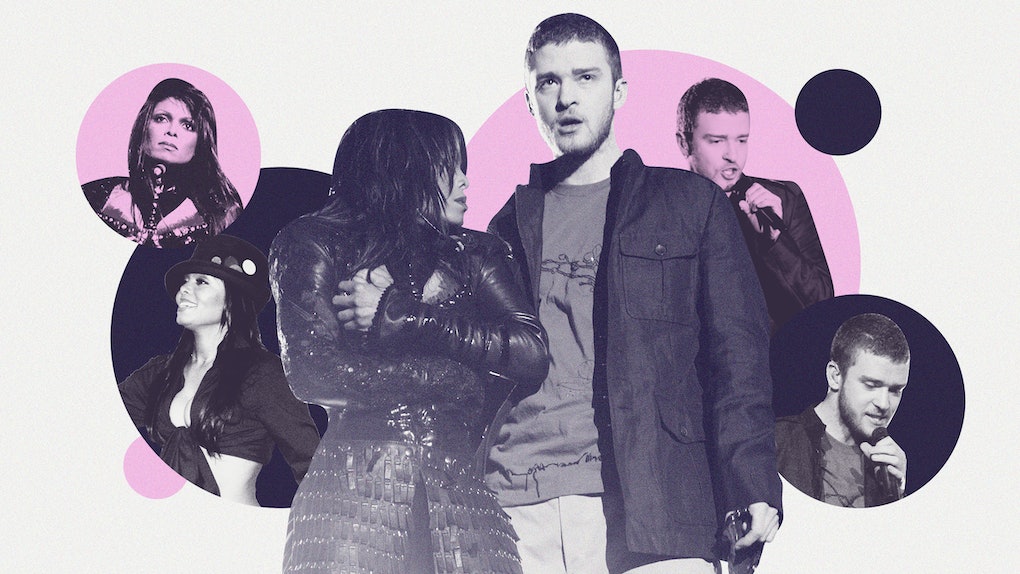 As one of the most-watched TV events of the year, the Super Bowl halftime show puts pressure on performers to command the stage for millions of viewers at home. There have been decades of memorable performances, lackluster flops, and shocking scandals associated with the show, but one year in particular is forever cemented in viewers' minds. Justin Timberlake and Janet Jackson's Super Bowl scandal in 2004 remains one of the most controversial TV moments to date, and its lasting implications are still debated in pop culture.

The 2004 halftime show for Super Bowl XXXVIII was broadcast live on Feb. 1, 2004 from Houston, Texas. The game-day broadcast saw the Carolina Panthers go head to head with the New England Patriots, but by the end of the night, it seemed everyone could only focus on one thing: the musical performers who hit the stage. Why? Well, at the end of Timberlake and Jackson's finale performance of "Rock Your Body," the pair suffered a wardrobe malfunction that exposed Jackson's right breast.

The backlash was swift and intense as Jackson received the brunt of it. Some speculated the malfunction was purposefully orchestrated as a publicity stunt. Others felt the overall performance was too sexual in nature for television, with the wardrobe malfunction being the icing on the cake. A small sector of viewers believed it to be an unfortunate accident that received an unwarranted amount of attention. The jury is still out about that, but many agree Timberlake's behavior after the scandal was unacceptable.

Now that Timberlake finally apologized on Feb. 12 for not standing in solidarity with Jackson after the performance, it's the perfect time to reflect on the contentious pop culture moment.

There's no evidence to suggest Timberlake and Jackson were close friends prior to their 2004 performance, but there were some rumors that they had a brief romance in 2002. Apart from that, in a 2006 interview with Oprah Winfrey about the incident, Jackson did imply the pair had an established friendship by the time they hit the stage at the Super Bowl.

As far as music collaborations go, the Super Bowl performance was their first.

The incident, which came to be known as "Nipplegate," took place in the final moments of Jackson's headlining Super Bowl performance, during which she sang hits like "All For You" and "Rhythm Nation." Viewers were thrilled to see Timberlake join Jackson on stage as a surprise guest to belt out JT's 2002 single "Rock Your Body." While their incessant grinding could have been perceived as risqué, their dance moves were completely overshadowed by the nip slip that followed. As the pair sang the final notes of the song, JT reached over and ripped a piece of the singer's costume top off, accidentally exposing her right breast.

Representatives for the singers later explained the plan was for Justin to remove the rubber bustier and reveal a red lace bra underneath. However, that didn't exactly go to plan, and Jackson's breast was bared on national television.

The Unfair Backlash Against Janet Jackson Following The "Nipplegate" Scandal

Jackson's career took a major hit following the Super Bowl, while Timberlake's involvement in the incident was seemingly forgotten altogether, inciting a larger conversation about sexism in the industry.

For starters, CBS faced millions of dollars in fines following the incident. The FCC (Federal Communications Commission), which regulates cable TV content across the United States, took CBS to the Supreme Court. The network was forced to pay a $550,000 fine for indecent exposure.

There were also the whispers that Jackson was then banned from the 2004 Grammys, which took place one week after the Super Bowl. She was scheduled to introduce the Luther Vandross tribute at the awards show, but wasn't in attendance at the ceremony. According to Entertainment Weekly, this may have (sort of) been by her own choice. In the days before the ceremony, Jackson's rep said CBS and Grammy producers agreed to welcome the singer if she delivered an apology on air, which she didn't seem willing to do. At the same time, a publicist for the Grammys insisted Jackson had never been shut out of the show to begin with. A short statement from CBS stated. "Ms. Jackson declined the invitation. Mr. Timberlake accepted.”

Regardless, Jackson missed out on an event she likely would have attended if the Super Bowl incident hadn't taken place. To make matters worse, she also had her songs and music videos pulled from numerous radio stations and television channels.

Jackson was the first to say the negative press was blown out of proportion. "It's truly embarrassing for me to know that 90 million people saw my breast, and then to see it blown up on the Internet the size of a computer screen... But there are much worse things in the world, and for this to be such a focus, I don't understand," she said in a March 2004 interview with USA Today.

Jackson also issued a public apology about her performance mishap. "My decision to change the Super Bowl performance was actually made after the final rehearsal," Jackson said directly following the incident. "MTV, CBS [and] the NFL had no knowledge of this whatsoever, and unfortunately the whole thing went wrong in the end. I am really sorry if I offended anyone. That was truly not my intention." However, she later backpedaled, saying she was pressured to release the statement during her September 2006 interview with Oprah.

Justin Timberlake's Response To The Backlash

Directly following the incident, Timberlake did little to defend Jackson against the backlash she faced, keeping his apology short and simple. "I am sorry if anyone was offended by the wardrobe malfunction during the halftime performance at the Super Bowl,” he said in a statement.

It wasn't until two years later, during a 2006 interview with MTV, that Timberlake admitted how deeply unfair the situation had become.

“If you consider it 50-50, then I probably got 10 percent of the blame,” Timberlake said. “I think America is harsher on women. I think America is unfairly harsh on ethnic people. If there was something that I could have done in her defense, I would have.” It was a fair admission, but one that rang hollow considering he did little to defend Jackson in the days following the Super Bowl.

Jackson surely has reason to feel like Timberlake left her hanging, but she later said she didn't harbor any negative feelings towards Timberlake. In her September 2006 interview with Winfrey, she kept things civil, saying she'd forgive him in due time.

In the years following the Super Bowl, Jackson's devoted fanbase called on Timberlake to address the situation, though he never did. In fact, an apology from Timberlake didn't arrive until 17 years later. Seemingly incited by the February 2021 Hulu documentary Framing Britney Spears, which showcased Timberlake's behavior toward Spears after their 2002 split, Timberlake decided to make amends with Jackson as well. An apology aimed at both Jackson and Spears appeared on Timberlake's Instagram page on Feb. 12, 2021.

"The industry is flawed. It sets men, especially white men up for success. As a man in a privileged position I have to be vocal about this." Timberlake wrote in his post. "Because of my ignorance, I didn't recognize it for all that it was while it was happening in my own life but I do not want to ever benefit from others being pulled down again."

"I specifically want to apologize to Britney Spears and Janet Jackson both individually, because I care for and respect these women and I know I have failed," Timberlake added, before saying he will continue to grow and learn moving forward.

After seeing Timberlake's apology, fans celebrated together. Jackson's fans streamed her 1986 album Control until it was No. 1 on the Apple Top 40 US Pop Album chart. The new wave of support made Jackson emotional, especially because her 2004 album Damita Jo, released in the wake of the 2004 Super Bowl halftime show, took a hit.

Jackson shared her reaction on Twitter for fans to see on Feb. 13. “I was at home just the other day, by myself, and I began to cry. I was crying because I was so thankful for all that God has blessed me with, all that he has given me,” she said. “I want to thank all of you for making Control number one once again after 35 years. I never, never in a million years, I would never think that this would happen. I really appreciate you, and I love you so, so much. Thank you.”

It remains to be seen whether Jackson will accept Timberlake's apology, but she's certainly got the support of her fanbase behind her either way.

More like this
Meghan Markle & Prince Harry's Beef With The British Tabloids, Explained
By Brandy Robidoux
Prince Philip, The Duke of Edinburgh, Has Died At The Age Of 99
By Noelle Devoe
Millie Bobby Brown's Quotes About Growing Up In The Public Eye Are So Real
By Brandy Robidoux
Stay up to date