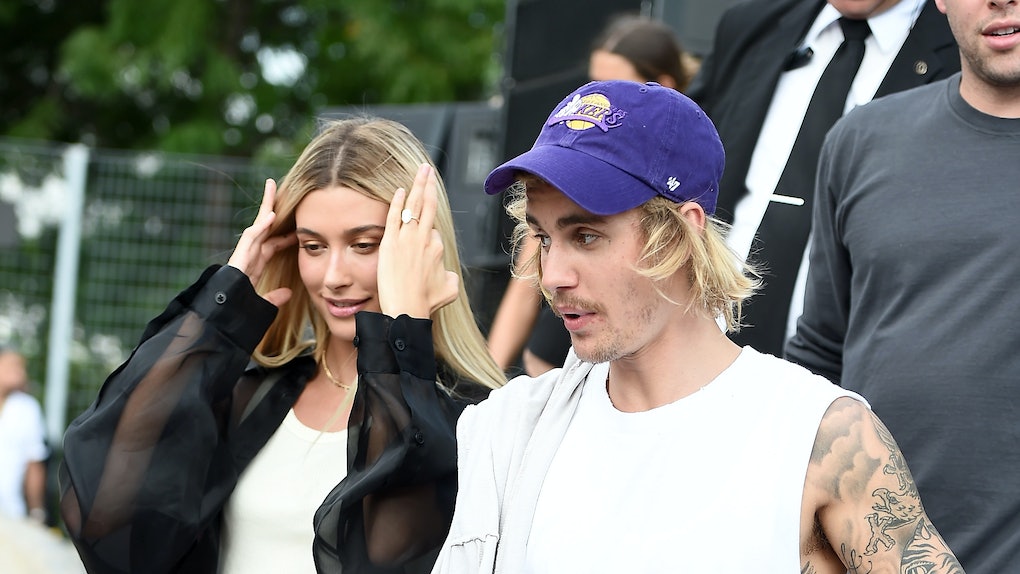 Hailey and Justin Bieber have endured their fair share of media backlash since tying the knot late last year, but they're not letting anyone bring them down. In fact, Justin and Hailey Bieber's body language in Hailey's Instagram birthday tribute to her man shows that despite the headlines, they are still very much in love and working through their first year of marriage. I spoke to two body language experts to get their takes on the gorgeous couple, and their analyses did not disappoint.

"Overall, their body language indicates that they feel extremely connected and in sync and that there is a strong level of love and security found in each other," body language expert Lisa Mitchell tells Elite Daily. If you think about how long these two have known each other (they were friends for a while after they met, when Justin was still a teen heartthrob and Hailey was only 13 years old), it makes sense their body language shows how safe they feel together. "Hailey is more expressive in these photos and may lean more to depend on Justin than vice-versa, but there's plenty of mutual affection to indicate their relationship is strong."

Not only have the Biebers established a sense of security with each other, they've also developed a sense of trust that is evident in their body language in the first picture Hailey posted. "Hailey literally leans into Justin and puts her arms around him for comfort and support in the first photo and Justin appears to enjoy being her 'rock' and source of support," Mitchell says. "Her cheek on his shoulder and peaceful expression show she trusts him and is peaceful around him." Traci Brown, body language expert and author of Persuasion Point: Body Language and Speech for Influence, agrees with Mitchell. Hailey's "clinging to him for support," Brown tells Elite Daily. "He’s clearly focused on something else but doesn’t mind her being there."

While it may seem like Hailey has a melancholy look on her face in the first photo, don't let that fool you into thinking they're not happy together. She posted a second one (click on the photo and scroll!) where she and Justin are all smiles, and it's absolutely adorable. "You can see the warmth and happiness between the two of them," Mitchell points out. "Their torsos [are] totally connected and [their] arms around each other [show] their close connection and how they [are] depending on each other to feel secure." Hailey's expression in the second one shows genuine happiness", Mitchell continues, "with the corners of her mouth pulled up and outward and the corners of eyes activated by the broad smile."

They're "showing the same level of emotion and reaching for each other at about the same level," Brown says. So, above all else, Hailey and Justin's body language in her birthday shoutout for him shows two things: They feel incredibly safe and secure with each other, and they are extremely happy together. I'm rooting for ya, Mr. & Mrs. Bieber!