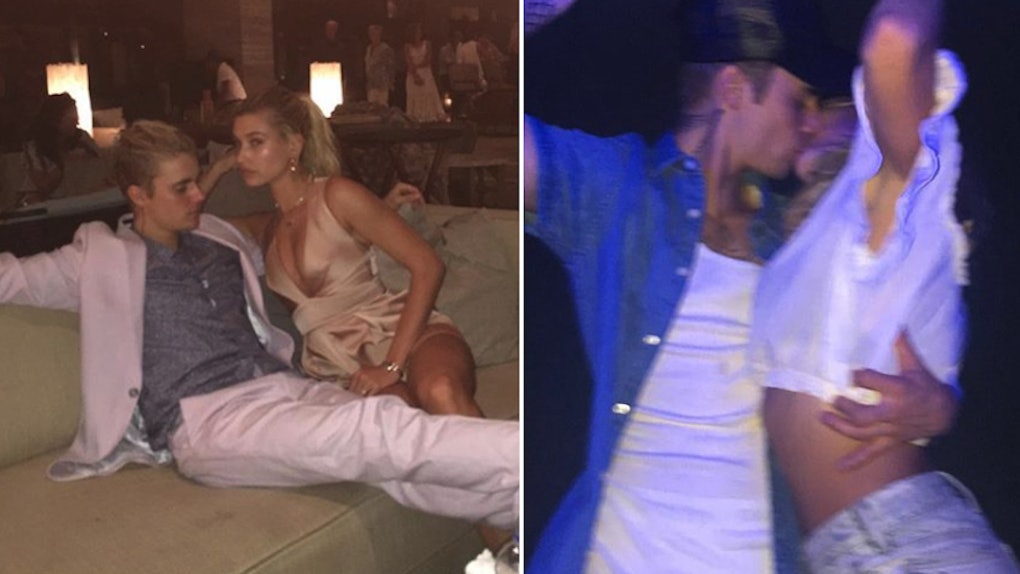 Unless you live under a rock, you've heard the news that a certain teen heartthrob and his (not so) rumored girlfriend got engaged this week. Yes, as shocking as it may sound to the world, Biebz is off the market for good. Thankfully, Justin Bieber and Hailey Baldwin's body language is actually evidence of how strong their relationship is (contrary to popular belief), and how long they've both been wanting this to happen. Yes, while it may seem strange that the two got engaged so suddenly, there's no denying that the heart wants what it wants, and for Beiber and Baldwin, they just know.

At least, that's what it looks like to the untrained eye. According to body language expert Traci Brown, author of Persuasion Point: Body Language and Speech for Influence, Beiber and Baldwin's engagement isn't actually that surprising.

Now, in case you do live under a rock, or you somehow haven't heard about Bieber and Baldwin's engagement, allow me to fill you in. If you're anything like me and you aren't exactly down with the youths, then you might not have even known that Bieber and Baldwin were an item. Maybe you thought the singer was still dating Selena Gomez, and that's totally fine, because it's all a little confusing.

But, the thing is, the two have actually known each other for almost ten years, although it's a little confusing as to when they actually first started dating. Really, the two met when they were just young teenagers, back in 2009, according to Teen Vogue. That means Bieber was either 14 or 15 years old, and Baldwin was 12 or 13. Basically, they have a long history, and according to Brown, this could explain some of their encounters with each other since then.

They've always had a spark.

Way back in 2014, many were speculating as to whether Bieber and Baldwin were an item, after the two had been spending some time together, and even going to church with mutual friend Kendall Jenner, according to MTV.

But things definitely got more intense at some point

Then, nearly a year later, Bieber and Baldwin took a video together on vacation that definitely gave off a flirty, playful vibe — something Brown definitely agrees with. In fact, she said, "They're putting that vibe out there visually for everyone. You don't do that unless you have a connection with someone."

A few days after posting the above video, Bieber posted this photo of the two kissing. It was posted on January 3, 2016, and gives the impression that two spent New Year's Eve together. On said kiss, Brown said that they knew exactly what they were doing when they posted that photo.

"That's for show," she said, about them throwing their hands in the air. "You don't put your hands in the air when you're making out with someone generally, so they know they have an audience." Perhaps Bieber and Baldwin wanted some privacy before posting an intimate moment, but then again, Brown says, "It's an intimate moment, but it's between us and them, not them and them."

Which really might explain why they stopped posting so many pictures together.

They're really, really into each other.

Again, that same day, Bieber uploaded another photo of him and Baldwin on what seems like the same vacation, sitting on a couch. For most people, it's just a super sexy shot, but according to Brown, there's more happening.

"You gotta look at where people's energy is going," she explained. "She's interested in how she looks because she's looking at the camera, although her body and shoulders are facing toward him."

Brown describes Baldwin as having a "dichotomy of her attention to him versus her attention to the camera." And as for Bieber? Well, "He's just looking at her boobs." Basically, their body language in this photo makes it clear that "He's totally into her, she's got her attention split," as Brown said.

Even when they aren't paying attention, their body language says so much.

After news broke that Bieber and Baldwin were engaged, a fan posted a couple of photos of the two in the Bahamas. For Brown, these photos are particularly interesting, because they're not pictures that Bieber or Baldwin chose to show.

But, "they're angled toward each other slightly, so we don't see what they're paying attention to, but it's the same," she said. She continued, saying "they both have a drink in the same hand, so they're just really connected. They're matching each other which just shows what a really, super comfortable connection with each other they have."

In another candid shot of the couple, Bieber is leading Baldwin toward something. "He's leading her, she's following, it's a traditional male-female role," Brown said. And while that isn't applicable to every couple, and may have just been a coincidence, it's still interesting. Additionally, they both switched their drinks to a different hand, continuing to match each other, "which just kind of says, 'great let’s do this thing,' they're on the same page, they're connected."

Then, finally, came Bieber's own confirmation that he and Baldwin are engaged by sharing two sweet photos of them looking blissfully in love. And really, according to Brown, that's exactly what's going on with their body language.

"Their eyes are closed, they're in the moment," she said. Unlike previous photos, they're "not splitting their energy between the camera and each other." Clearly, they're "enjoying the moment and each other," as Brown said, but there is one little detail that catches her eye.

"She's got his arm all the way around his neck, you can't get it any tighter than that, so, she's keeping her man."