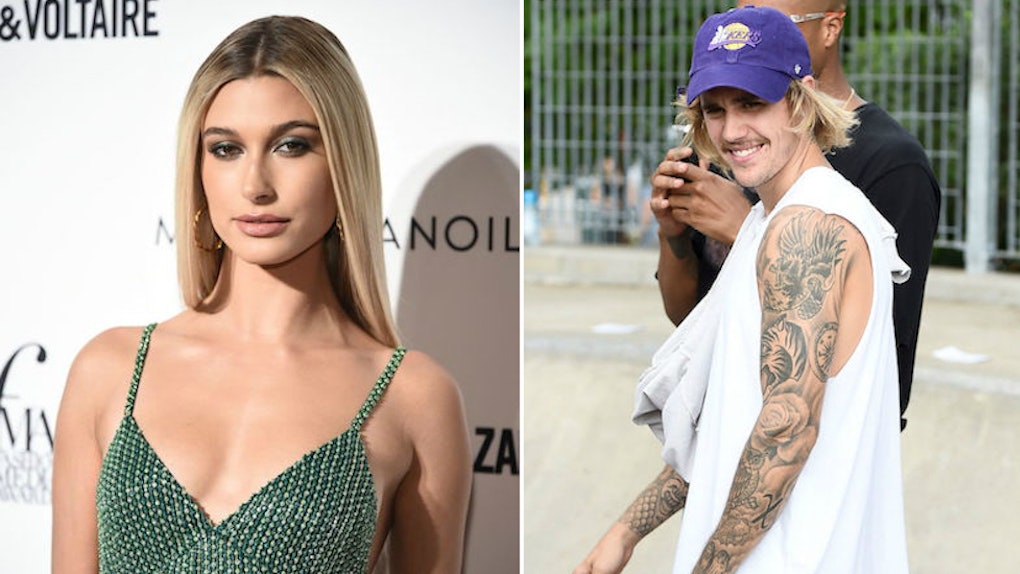 Hailey Bieber's Nickname For Justin Bieber Is Exactly What You'd Expect, But It's Not "Baby"

Newlyweds Justin and Hailey Bieber have endured their fair share of criticism from fans and the general public. After the two got engaged in what felt like a spur-of-the-moment getaway, fans have been obsessed with their relationship. Now that the two are married and living together in Canada, fans are even more curious about what goes on behind closed doors. After all, this is a couple who (to the public eye, at least) had a rollercoaster relationship, and got engaged after having been back together for, like, a hot second. All of that aside, they seem super happy, and Hailey Bieber's nickname for Justin Bieber proves that there's definitely a lot of chemistry between them.

In an Instagram post celebrating the "No Brainer" singer's 25th birthday, the 22-year-old model commented something that will change the course of history as we know it. OK, OK, that might be an exaggeration, but still, it's pretty amazing. For Bieber's birthday, hairstylist Florido, from Nine Zero One salon, took to Instagram to share his well wishes, posting a photo of himself spraying Bieber's hair with product. The caption is really what's important here, as Florido wrote, "Happy Quarter Centch Daddy!" and the Bieb's new wife dropped a bombshell when she commented, "Funny! That's what I call him too!"

Yes, you read that right. Your former childhood crush who used to rock heavy bangs while innocently belting out "Baby!" now goes by one of the most sexually-charged pet names in the book. Honestly, it's a little jarring to think about the former (well, current?) teen heartthrob getting called "daddy" by his wife, but hey, if they're happy then good for them!

Of course, the singer's wife also posted her own birthday tribute to her husband, as she shared two sweet photos of the two of them together, and wrote a simple caption, "25 sure looks good on u lover.." It was sweet simple, and still a little sexy. Clearly, these two like to keep things hot. Which makes sense, as they now reside in Canada together, where it's currently freezing.

Previously, Mrs. Bieber had opened up to model friend Kendall Jenner about married life on Jenner's podcast, Zaza World. "It’s a scary thing, but it’s also the person that I’ve literally been in love with for so many years," she told Jenner, according to Us Weekly. "So, that’s the best part about it. Like, I feel like he’s my best friend. And we just get to do life together forever, now." It's a sweet outlook to have on marriage, although Bieber also admitted that she knew they had moved fast.

"It’s definitely scary to be this young and be married," she told Jenner, as Us Weekly reported. "I think the forever aspect for me is just like, you don’t think about that until you get married. And then you’re like, OK, this is really, like, this is forever. Meaning, like, there is no end."

The two newlyweds are definitely happy together, and if Bieber wants to call her man "daddy," that's totally hot. And remember, people who use "daddy" as a pet name don't necessarily past trauma related to fathers. "Yes, 'daddy' can mean 'father,' but we also use the word to indicate when someone is the boss, in charge, a protector, or doing a good job," sex therapist Vanessa Marin, told Broadly. "That's usually the meaning women are going for in the bedroom."

More like this
Justin Bieber's Quote About His First Year Of Marriage To Hailey Baldwin Is Unexpected
By Corinne Sullivan
Why Did Jennifer Lopez & Alex Rodriguez Break Up? She Dropped A Hint On Instagram
By Candice Jalili
Zoë Kravitz's Instagram With Taylour Paige Shows Them Looking So Happy Together
By Candice Jalili
Stay up to date