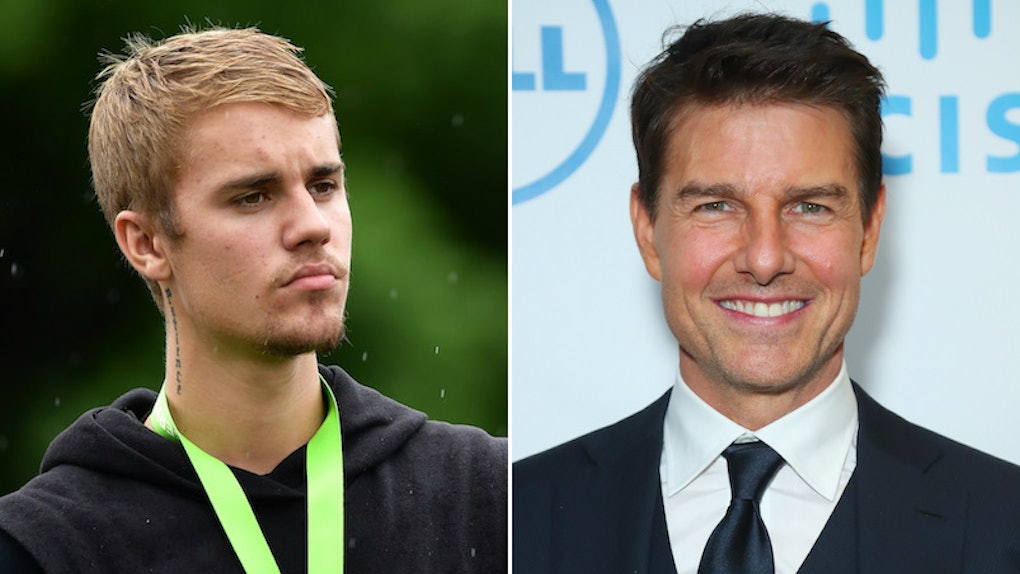 I don't know why, but I feel like I should have seen this coming. Justin Bieber's tweet challenging Tom Cruise to a fight feels like a headline I've read before, though surely this is the first time it's happened. The young singer is calling out the award-winning actor on Twitter and fans are like, "Wait, what is happening?" I'm not above saying that I'd personally love it if Cruise accepted and then live-broadcasted the whole thing, but I too am scratching my head. Biebs, what's going on, buddy?

The tweet appeared on Bieb's feed on Sunday, June 9, without any kind of ramp-up or warning. In fact, all of the posts prior to the Cruise call-out (as I like to call it) were promoting Bieber's new collaboration song "I Don't Care" with Ed Sheeran. Mainly, he was busy sharing snippets of the tune and the official silly music video.

Then, seemingly out of nowhere, Bieber tweeted this message: "I wanna challenge Tom Cruise to fight in the octagon. Tom if you dont take this fight your scared and you will never live it down. Who is willing to put on the fight? @danawhite?"

If you're like me and not very hip to, like, fighting references, let me help you out. The octagon is the official name for the Ultimate Fighting Championship (UFC) ring. Frankly, you would not believe the amount of literature there is out there about this thing. The UFC website explains the octagon is a "robust plastic-coated fence" that "eliminates the chance of athletes tumbling out of the Octagon, as they can in a traditional ring during boxing, kickboxing or Muay Thai bouts."

Dana White, whom Bieber went ahead and tagged in his tweet, is the current president of UFC, which also happens to be the largest mixed martial arts organization in the world.

So, my assumption is Justin Bieber was either watching a UFC fight and thought the ultimate opponent would be Tom Cruise and/or he was watching a Mission Impossible movie and peeping Cruise's forearm muscles and thought it'd be cool to take him on in a physical challenge.

Regardless, fans are confused.

Weirdly enough, Bieber did not tag Tom Cruise who is on Twitter, and Cruise also has yet to respond to the challenge.

However, UFC-champ Conor McGregor jumped in saying he's more than happy to help facilitate the duel. (Do we call them duels? Who knows?)

If Tom Cruise is man enough to accept this challenge, McGregor Sports and Entertainment will host the bout. Does Cruise have the sprouts to fight, like he does in the movies? Stay tuned to find out!

While the likelihood of this match ever coming to fruition is even smaller than Bieber and Baldwin breaking up and him getting back together with Selena Gomez, it's still fun to think about. In my personal opinion, I suspect the professional stunt man who hangs out of helicopters for fun would win. Then again, Bieber can moonwalk... so...

Alright, you caught me. I don't know how fighting works.

More like this
Bryce Hall Is Reportedly Being Sued For Starting A Fight At An L.A. Restaurant
By Brandy Robidoux
Lizzo's TikTok About DMing Chris Evans On Instagram Is Truly Hilarious
By Abby Monteil
Why Did Addison Rae Deactivate Her Twitter? Fans Think This Is The Reason
By Brandy Robidoux
Stay up to date