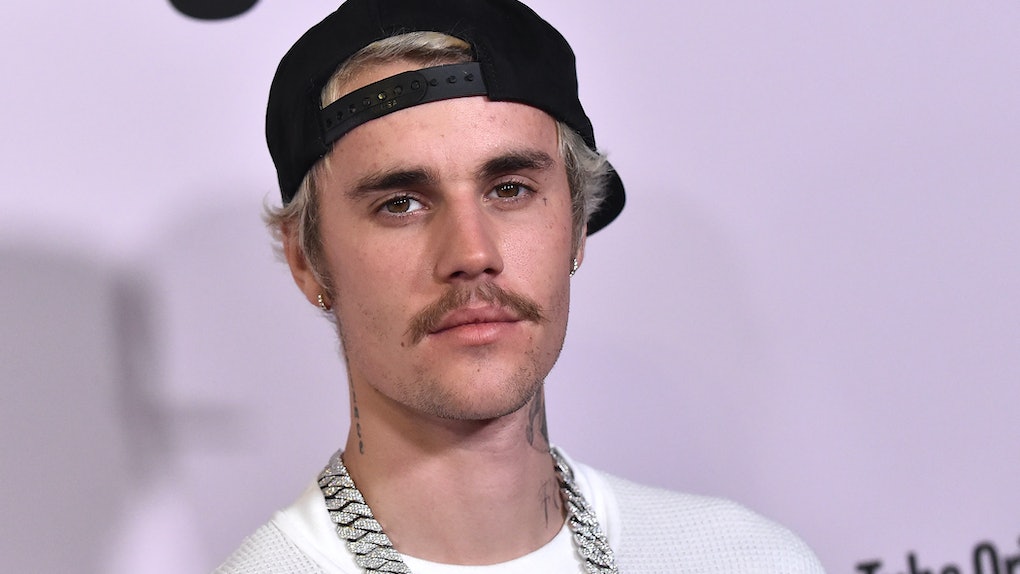 It's no secret that Justin Bieber played a huge role in Billie Eilish's life, and the singer recently revealed a major moment involving her icon that fans didn't know about before. The singer’s documentary, The World’s A Little Burry, premiered on Apple TV+ Friday, Feb. 26, and in it, she talked about the moment she met Bieber. The “Bad Guy” singer has always been pretty open about her fangirl status, but now fans are getting an inside look into the celeb’s first text exchanges. ICYMI, Justin Bieber’s text to Billie Eilish in The World’s A Little Blurry makes it clear how much he's supported her from the start.

For a refresher, Eilish met Bieber when she was performing at Coachella in 2019. As shown in the doc, she met him and quickly ran away and hid her face before giving him a huge hug and crying. Basically, she was every Belieber ever in that moment, and it was deeply emotional. While driving home afterwards, she talked about the moment, saying, “He just stood there and looked at me. With his eyes!"

After the meeting, Eilish received a text message from him, which TBH, will tear your heart out. Bieber wrote, “It's moments like tonight where I'm reminded what I mean to people.” He continued, "Your love for me touched my heart. You are so special, not for what you can do, but for who you are. Remember that. I'm so impressed by your aura and presence.” He added, “You carry a heavy calling. You are an idol to so many. I'm excited to watch you flourish. You are beyond special. Thank you for tonight. It meant just as much to me as it meant to you."

Bieber also gave her a bit of advice in the text, writing, “I also want to let you know that it feels like yesterday… It feels like yesterday I was singing… Oh, yesterday I was 15 singing 'One Time,' and now I’m 25 and that was 10 years ago, and it flew by like a flash.” He concluded, “Enjoy every minute of what you are experiencing. Embrace it all, believe you are great, but not greater than anyone.”

Eilish read the text through tears alongside her family in the doc, but that wasn't the only time the new movie showed the two pop stars' relationship. Fans also got to see Bieber text Eilish about the possibility of a collaboration, which would later become the "Bad Guy feat. Justin Bieber" remix.

The World's A Little Blurry also featured Eilish's mother, who gave more details about her Bieber-loving daughter. "She was lovesick and desperately in love with Justin Bieber. The whole family went to see Believe or Never Say Never on Christmas day. We all thought he was amazing," she commented.

Eilish's documentary includes another Bieber appearance: a FaceTime call with him after she won five Grammy Awards in 2020. "Was it amazing? How did it feel? I'm so proud of you," he said.

Eilish's The World's A Little Blurry documentary is out now, so you can catch it on Apple TV+ to get the full behind-the-scenes action.

More like this
Zendaya's Instagram About Voicing 'Space Jam: A New Legacy's Lola Bunny Is A Throwback
By Abby Monteil
Kathryn Hahn Hopes To Explore Agatha's Backstory In Future Marvel Projects — EXCLUSIVE
By Dylan Kickham
The 'Glee' Cast's Tribute To Naya Rivera At The 2021 GLAAD Media Awards Was So Moving
By Abby Monteil
Stay up to date