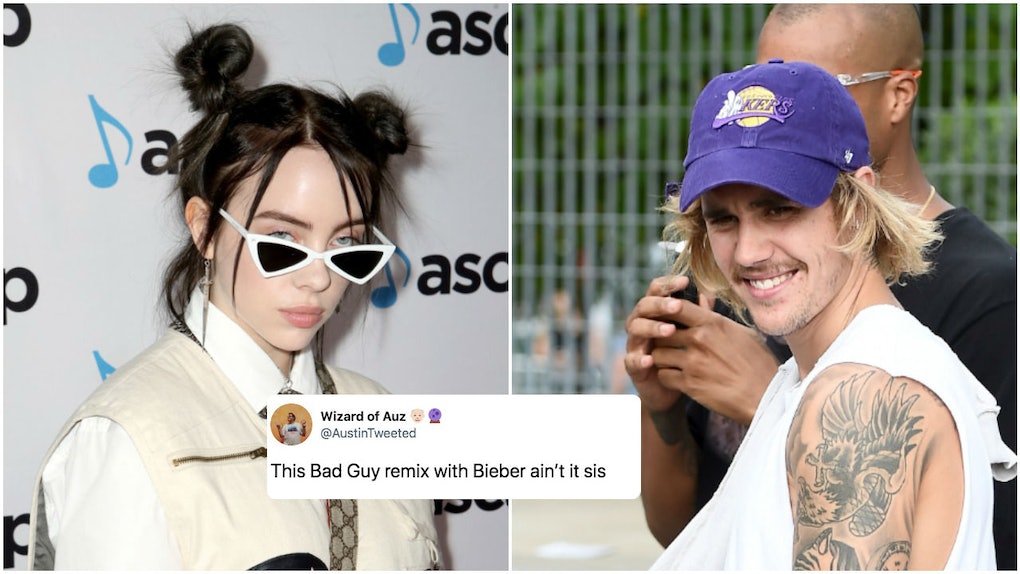 Be careful what you wish for. The remix Billiebers (that's Billie Eilish _ Justin Bieber, y'all) have been waiting for is finally here, and some fans are surprisingly not here for it. The tweets about Billie Eilish and Justin Bieber's "Bad Guy" Remix are actually kind of split.

On Thursday, June 11, Eilish and Bieber confirmed what many fans were hoping and wishing and dreaming of: A collaboration between the two dynamic singers. Eilish, who is a huge Belieber, admitted in March 2019 that the two musicians discussed collaborating together over direct message. Now, the highly-anticipated project is here and fans are divided, with emotions ranging from love to absolute disdain. And, quite frankly, I'm shocked. How bad could it be? Bieber only added one verse to the song along with a few smooth ad-libs, as well a joint chorus.

In his verse he sings:

However, it's just not cutting it with some fans, and those fans had no problem letting Eilish know.

"This 'Bad Guy' remix with Bieber ain't it sis," wrote one fan.

This tweet may be in Spanish, but there is one word any English speaker can understand, and that's the word "horrible."

Another fan shyly admitted their preference for the rehashed track.

And, another shielded their face in agreement, sort of...

This fan just didn't know what to think...

One fan advised the song gets better with time.

Another took particular issue with Bieber's contributions, questioning his true commitment to the song and knowledge of the original track. "The Justin Bieber remix to 'Bad Guy' sounds so bad omg... " the user wrote. "It doesn't even sound like he heard the song before he just added some RnB vocals and 'oooohs' and Migos ad libs and called it a day????"

While another Belieber proposed some fans might hate the track purely for their disdain of Bieber. "People are soooo mad I posted lyrics with a justin pic. Ya'll [sic] truly lost the d*mn plot? Ya'll hate this man so much? I giggled. His power. Anyways thanks for stalking my account & keep streaming bad guy remix."

But, a few Belieber ride-or-dies were all in.

One sweet soul reminded fans that regardless of their thoughts over the track, Billie Eilish's dream of working with Bieber has come true and fans should be supportive. "Y’all in the comments are disgusting," the fan wrote. "It’s her idol, stop bringing her down. Leave her f*cking alone. Stream idc and bad guy remix."

True dat, y'all! I'm so happy for her. And, if you don't agree, you can always quietly take after this fan who is pretending the track doesn't even exist. P.S. The original is still on Spotify. You're welcome.

More like this
Victoria Beckham's Instagram About Justin Bieber's Crocs Is Brutally Shady
By Daffany Chan
These Tweets About Beyoncé On Netflix's 'Selena: The Series' Are Too Much
By Dylan Kickham
Britney Spears Fans' Tweets Reclaiming Justin Timberlake's May Meme Offer Alternatives
By Cianna Garrison
Stay up to date