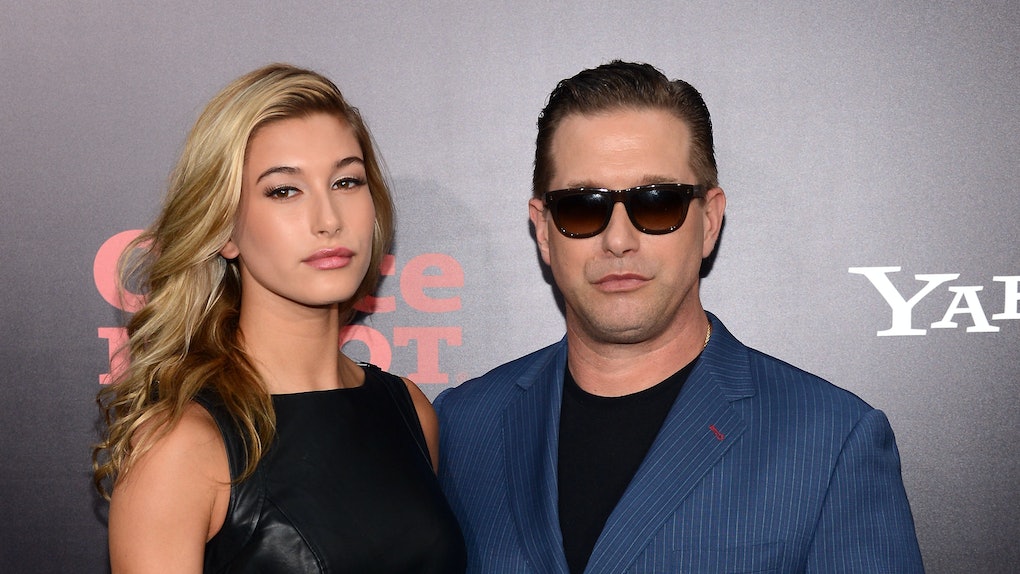 Anyone who follows the Biebs knows he's not shy about sharing his love for his wife, but Justin Bieber's Instagram for Hailey Baldwin's parents was a pretty freaking adorable change of pace for him. In the Sept. 30 post, Bieber decided to give Baldwin's parents a shoutout for a change, and the post is just as cute as you'd think it would be.

Bieber posted an old picture of himself, Baldwin, and her parents from what looks like years ago. Bieber still has his signature shaggy haircut and Baldwin looks like another tween Belieber. Both her parents are also present in the blurry photo, but don't worry, he made sure to point himself and Baldwin out by drawing pink hearts around both of their heads. The caption is where things really take a turn for the absolutely adorable. Bieber wrote the cutest ode, not only to his wife, but to her parents:

Aww, so freaking cute. Or course, Baldwin is an adult, and doesn't need her parents' consent to get married. But, hey, it's adorable that he wanted to give them this shoutout. Love that for him.

Bieber has been all about the throwback pictures on Instagram lately. In fact, on Sept. 28, he posted another throwback photo of himself and Baldwin from what appears to be the same day as the above post. He captioned the adorable picture:

My wife and I :) where it all began

Who would've known back then that these two were going to say "I do"? If you're wondering why this particular weekend had Bieber feeling so sentimental, it's probably because he and Baldwin are reportedly tying the knot and making it officially official. Yes, the two were already technically married legally in New York City on Sept. 13, 2018, but they're reportedly having a more traditional religious ceremony with friends and family at the Montage in Palmetto Bluffs in South Carolina. While the date of the actual wedding ceremony is still TBD as of now, the rehearsal dinner reportedly took place on Sept. 29. So, if they're following tradition, the wedding should be on Sept. 30.

"Guests arrived by boat to the rehearsal dinner on the Palmetto property. There were several water taxis that took guests over around 6:30 p.m.," a source reportedly told E! News of their rehearsal dinner, that reportedly included A-list guests such as Kendall Jenner, Scooter Braun, and Joan Smalls. "The dinner was on the edge of the water and was outdoors. There were many string lights hanging and lit candles. Everyone was seated at long tables and the dècor was very chic and white." There's also a video of Bieber humping Baldwin on a boat on their way to their rehearsal dinner, but that's, uh, neither here nor there.

Bieber has been taking to Instagram to get his fans hyped for the wedding ceremony for a few months now. In addition to posting the adorable throwbacks of himself and Baldwin from back in the day, he also posted some joke tuxedo options for fans to help him pick which one he should wear to his wedding. Lucky for all of us, Comments By Celebs captured Baldwin's comment on the tux options:

These two lovebirds are too much. Here's to a lifetime of love and happiness!

More like this
When Are Ariana Grande & Dalton Gomez Getting Married? Here's The Reported Tea
By Corinne Sullivan
Travis Barker's Birthday Instagram For Kourtney Kardashian Was So Extra
By Lydia Wang
Dale Moss' Instagram With Clare Crawley Suggests They're Back Together
By Corinne Sullivan
Stay up to date