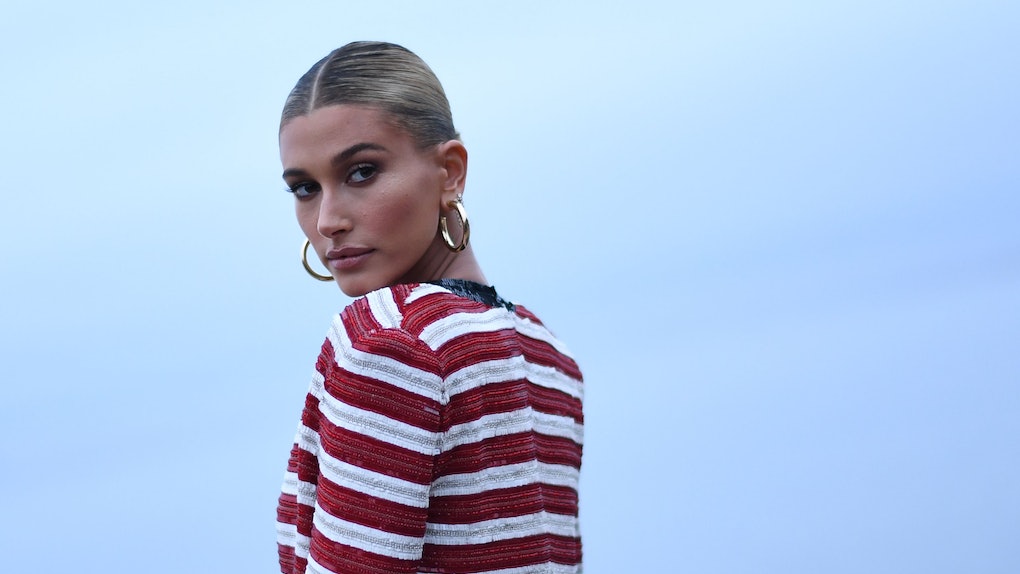 Of all of the things that can go wrong on a wedding day, a bride's worst nightmare is something happening to her dress. That ~almost~ happened to Hailey Baldwin. In a sweet Instagram post of Baldwin and her hubby Justin Bieber from the couple's recent wedding celebration in South Carolina, people are taking notice that Baldwin's dress was nearly in danger of destruction. Yep, Justin Bieber nearly ruined Hailey Baldwin's wedding dress and there's photographic proof.

Innocently enough, Baldwin posted a photo on Instagram that would otherwise be crowned as the sweetest ever if it weren't for one tiny detail that fans were pretty alarmed to notice. The photo is a black and white, elegantly framed view of the couple mid-kiss. However, if your eyes travel down the length of Baldwin's dress, you'll spot something a little odd. In Bieber's left hand — which is resting on the small of Baldwin's back — is a black Sharpie... with no cap on.

Whether or not Baldwin noticed this particular detail of the photo is unclear, as she simply captioned it, "thankful for the love of my life," voicing her gratitude like a true Belieber on Thanksgiving. None of the top comments on the photo address the uncapped black permanent marker either, which is pretty incredible.

IMHO, if any bride saw an uncapped Sharpie coming toward her dress in a photo, to say they would be panicked is an understatement.

Some of the famous friends that commented on the photo, without bringing up the Sharpie, include TV host Jason Kennedy and Khloé Kardashian. Baldwin and Bieber's wedding photos are stunning, which may be why no one noticed the Sharpie, but it's so obvious once you see it that it's a wonder it didn't surface until now.

The couple's Sept. 30 wedding ceremony took place a year after the couple first tied the knot at a courthouse in New York City and was held in South Carolina at the Montage Palmetto Bluff hotel's Somerset Chapel.

Baldwin had some beautiful ensembles, including a bespoke white off-the-shoulder dress from Vivienne Westwood for rehearsal dinner and a gorgeous bespoke wedding gown from Virgil Abloh. The wedding gown had elegant lace, a low cut back, and long sleeves, along with appliqué and pearl flowers. As expected, she changed into another dress after the ceremony: an off-white halterneck dress, which you can see in an Instagram photo from Justin Bieber that he captioned: "Looking forward to forever with you."

While it's understandable that people make mistakes, ruining a wedding dress is something that most bride's would not be able to forget, so it's fortunate that Bieber ended up keeping the black ink away from the white material. TBH, though, Baldwin seems to be awfully chill, so maybe she wouldn't have been too upset. Considering Baldwin recently laughed off pregnancy rumors swirling around the internet by posting a response to her Instagram Stories, saying, "No, I'm not pregnant I just really love food," her attitude seems to be very positive. So maybe she'd be pretty forgiving to Bieber, even if that Sharpie did end up ruining her dress. Whatever the case, things went off without a hitch, despite Bieber's close brush with disaster.