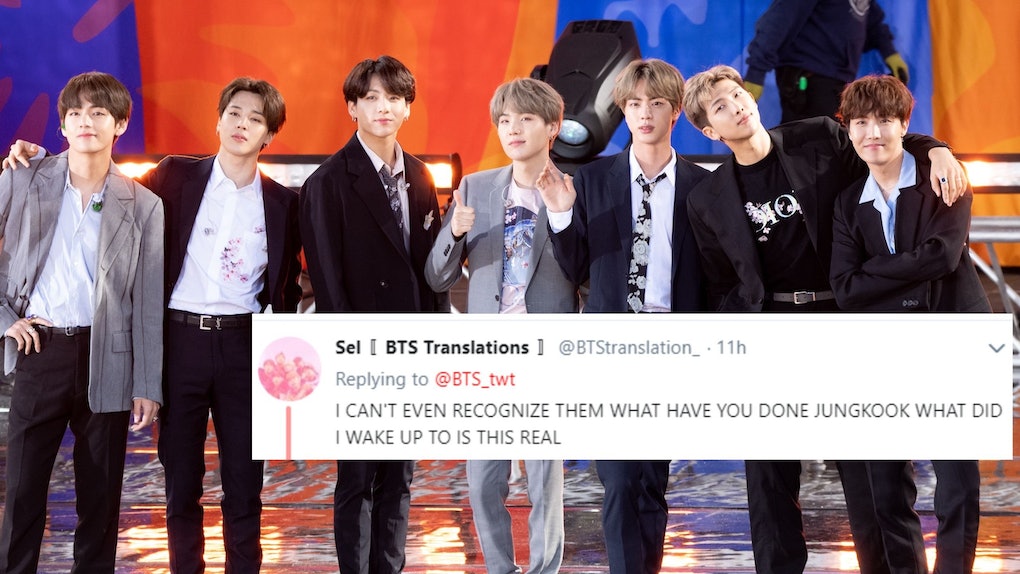 Their perfect skin, clean-shaven faces, and adorable personalities may have some people thinking they could be younger, but the members of BTS — RM, Jin, Suga, J-Hope, Jimin, V, and Jungkook — are, in fact, adults. Well, young adults, since they're all in their twenties. The youngest member, Jungkook, is 21, and the oldest member, Jin, is 26. Other than the guys changing their hair colors every few months, fans really don't expect huge changes in their physical appearances, let alone the members growing full-blown mustaches and beards. Now that would be unexpected. But, it looks like Jungkook has been wondering how the members will look in their 30s and 40s, because he's been editing pictures of BTS to look much older, including lots of facial hair. Jungkook's photo of BTS as old men is so hilarious, it will literally make you laugh out loud like Jin.

So, you know how people have been sharing funny Snapchat edits of themselves looking like babies? Yeah, this is the total opposite of that, because Jungkook aged BTS 15 years ahead. According to a translation by fan account @BTS_BANGTAN_FR, his tweet read:

I tried to predict how we'll look after 15 years. While editing this, I almost passed out of laughter, I couldn’t breathe.

Take a look at what he meant:

You stared at that for a good five minutes, didn't you? I know I did. I almost couldn't recognize some of them! But what's up with Jin and Suga's hair being the only ones' whose hair turned gray? Maybe it's because they're the two oldest members of BTS? If so, whatever filter Jungkook used is so accurate that it's creepy. And why did Jungkook edit three pictures of V and only one of himself? Oh, I have so many questions.

The BTS ARMY were so amused at Jungkook's edit, with some of them nicknaming the group "Beardtan" after "Bangtan." Just look at some of their reactions:

When I first saw the picture, I thought maybe Jungkook was bored and just messing around with some filters, but now that I think of it, he probably got the idea from BTS' appearance on The Late Show With Stephen Colbert on May 15. During BTS' interview, Stephen Colbert asked the group where they see themselves in 10 years. You'd think they would go on about all the dreams they hope to accomplish by then (like maybe winning a Grammy award — I'm looking at you, Suga), but they chose to go a more lighthearted approach. Suga hilariously responded with "36," while Jungkook and V thought about all the facial hair they could grow by then.

"Maybe mustache," Jungkook said, while moving his hand around his face, just picturing all the hair he could grow in 15 years. Meanwhile, V said that he wants a mustache and some long hair.

Watch the whole thing go down at around the 5:00 mark below.

Fans really have no idea what BTS will look like in 10 or 15 years. Truth is, they don't even know how BTS will look in a week because those guys are always changing up their hair colors. But maybe they'll take some inspiration from Jungkook's edits and surprise us with a mustache next comeback? I can only wish!