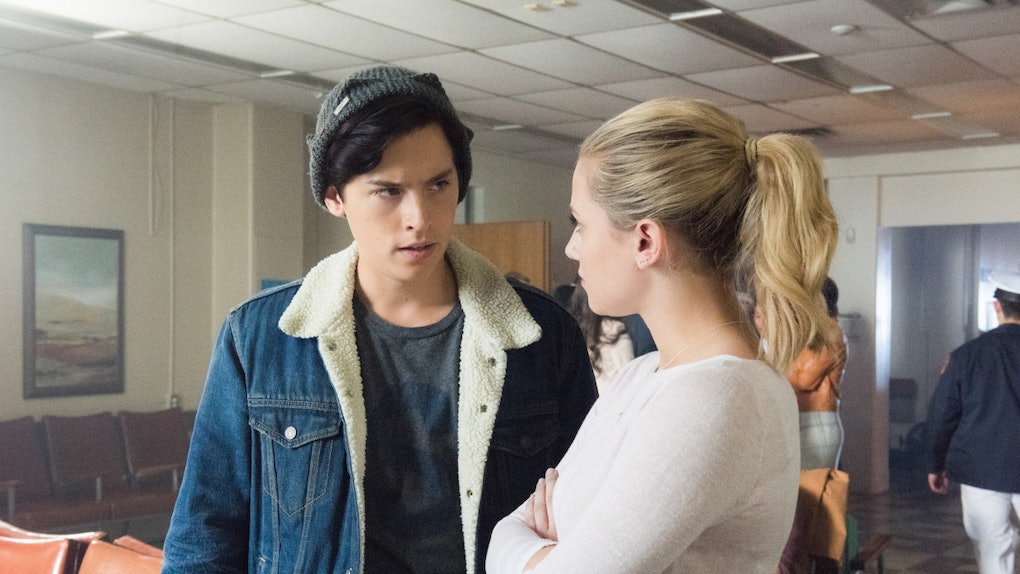 Jughead Ate A Burger On 'Riverdale' & It's About Freakin' Time

When Riverdale debuted last Spring, the "dark and edgy" take on the Archie comics series was controversial from the beginning. The bright and sunny setting was dark and foreboding. Archie wasn't caught between Betty and Veronica, he was sleeping with Miss Grundy. Jughead had somehow become the narrator of the piece, he and Betty fell in love, and for the love of god, the boy barely ate anything. That last misstep seems to have been corrected this season, when in the premiere, finally, Jughead ate a burger on Riverdale.

For those who are scratching their heads over this one, let us explain. In the original Archie comics, Jughead isn't having a love affair with Betty Cooper. His one true love is food. Lots and lots of food, especially hamburgers, pizza, and all those teenage foods that kids in high school love to power down.

Jughead's ability to put down several helpings of anything in a single sitting is a running gag in the comic stripes, and he's pictured more than once tossing burgers into his mouth, Garfield style, like one might eat popcorn. Likewise his running tab at Pop Tate's Chock'lit Shoppe is also a running joke for all the food he eats.

Along with that is the fact that Jughead eats and eats and never gains an ounce on his skinny frame. (We all know that dude, don't we?)

Jughead is such a foodie that in the comic strip, he's even written his own Forsythe P. Jones Cookbook, at the encouraging of Miss Grundy. (The version Archie isn't sleeping with, that is.) He wins food eating contests on the regular, and supposedly holds world records in eating, including a burger made up of 16 different burgers, as well as speed eating pizza.

Jughead is such an eater, that another running gag features him and the gang going into an "All You Can Eat" restaurant. Then the restaurant closes down behind them as Jughead finally walks out hours later. This is a man who loves food.

So you can imagine, this new version of Jughead, who managed somehow to keep the weird crown hat of the comics (even if it is in knit cap form), and yet has never once, in 13 episodes, has ever eaten a burger on the show, even when he and Betty have sat together at Pop's. It's an oversight that desperately needed correcting.

It speaks volumes that when Betty and Jughead head over to Pop's to look for Fred Andrew's wallet, fans did not immediately assume we might see them eat. (Especially when they walk in and the first thing they see is a huge pool of blood on the floor. Not exactly appetizing, or up to health codes.) After all, it's the mystery that's the most important thing to focus on right now.

But Pop was so sad looking when he asked if he couldn't make them so food that Betty gave in and said okay, while Jughead declared he was "always hungry, yeah!"....

....and then he powered down a burger, Jughead style.

In times of crisis, some people lose their appetite. But me? Mine increases tenfold.

Besides, he admits, he hasn't eaten since last night. Now there's the Riverdale Jughead we know and find really weird. Personally, I'm going to need him to at least win a pizza eating contest before Season 3 gets here.

We'll have to see if Jughead's eating becomes a new focus this season, as the show moves from only a 13 installment run to a full 22 episodes. Last season can be excused as not really having time to stop and eat, there was so much jammed into the half a season. This year, there's no reason to not stop for hamburgers.