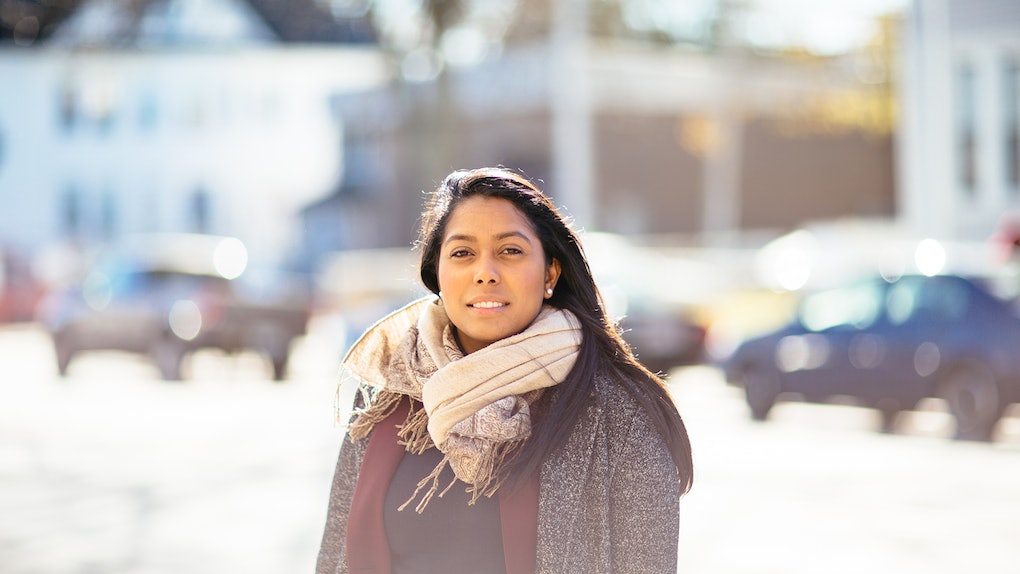 There is no question that July's most notable news headlines have been dominated by President Donald Trump's international trips, televised hearings in Congress, and indictments issued against alleged Russian hackers by the Justice Department. But on the ground, in districts around the country, dozens of primary elections are underway that will impact local communities. One of those races is being contested by Juana Matias, a 31-year-old politician running for a congressional seat this summer in Massachusetts.

Pick apart the most significant details about Matias' candidacy, and you'll find several lessons about the state of politics and the ways in which the current system is failing to meet the needs of a hugely diverse nation — and the ways in which candidates like Matias are stepping up to correct for that.

We have failed as a party to stand for our values, and we can do better.

Take her youth, for example. Matias won her first political race in November 2016, winning a seat in the Massachusetts legislature at 29 years old. Two years later, at 31, she's looking to jump from Boston to Washington D.C., by way of the race to win the House seat for Massachusetts' third congressional district (MA-03).

That seat will be vacated by Rep. Niki Tsongas (D-Massachusetts), who announced in August 2017 that she would not seek re-election. Rep. Tsongas is 72 years old, and whoever succeeds her in Congress will enter a Democratic caucus that is presently led by 78-year-old minority leader in California Rep. Nancy Pelosi and 79-year-old deputy in Maryland Rep. Steny Hoyer.

This all comes at a time when the most notable potential Democratic candidate for the 2020 presidential election may well be 75-year-old former Vice President Joe Biden, although he hasn't officially said he will run.

At a time when the Democrats hold a waning — but still decisive — advantage over Republicans with young voters, Matias' candidacy highlight the fact that the leadership of the party, across the board, is still too old for its growing voter base.

According to Matias, what's needed is a new generation of Democratic leaders who "unapologetically" stand for the party's values, like dedication to health care, humane immigration policies, and social rights.

"That's what is lacking in the Democratic party," Matias tells me in an interview for Elite Daily. "We have failed as a party to stand for our values, and we can do better — and the way we're gonna do better is by electing people who have a service-driven background. That's what we need to do."

Service is indeed key to Matias' candidacy for MA-03. The 31-year-old state representative is also a former AmeriCorps legal advocate, which made her the type of candidate an organization like New Politics, which endorsed her candidacy, is attracted to. New Politics, along with other organizations like VoteVets, is dedicated to boosting candidates who have a background of public service.

"For me, they've been incredibly instrumental. I'm a non-traditional candidate, a woman of color, a first generation immigrant, and I've faced many barriers. Without New Politics and their guidance, I wouldn't [be] where I am today in this race," Matias says.

At a time when the Democratic party seems to need fresh faces, many argue that the way politics is structured, new candidates are only as good as the organizations backing them and the money those organizations attract for the candidates. But Matias' candidacy seeks to dispute that logic entirely.

They get into these positions, and they have no idea what working class people are going through, and these issues continue to go unaddressed.

Yes, Matias praises the work of New Politics and similar organizations that support less traditionally connected candidates, but she's also candid about asserting that candidates across the country, particularly candidates of color, can still feel shut out by the need to court political organizations.

"I think the system is rigged, especially when you're running for Congress," Matias says. "[Some of] the organizations themselves that are part of this political process, when you meet with them and talk with them, they want to find out: 'Can you raise money?'"

Because of the emphasis on fundraising to campaign, Matias says, "The system is rigged for the 1 percent who have access to these positions. Then they get into these positions, and they have no idea what working class people are going through, and these issues continue to go unaddressed."

Obviously, Matias wants to change that.

When it comes to her actual platform as a candidate — which includes a push to abolish ICE and to set a $15 minimum wage — it's hard for State Rep. Matias to decide which she deems the most ambitious to pursue. After thinking it over, she settles on one issue that she says is close to home: health care.

"I think it's disgusting that we still don't have a single-payer health care system," Matias says, noting her family's experience watching her dad suffer from pancreatic cancer. "We have an obligation to do better," she adds. "We should ensure that every single American has access to the health care they need, based on their need, not based on your income, not based on your wealth. I think that's my biggest challenge and my biggest hope to accomplish if given the opportunity to represent [MA-03] in Congress."

Matias' zeal for health care reform spotlights yet another example of how the system is changing, especially with young people at its helm. A pursuit of single-payer health care appears to be the one ambitious, unifying policy initiative among both Democrats in Congress and those who hope to be in Congress in the future.

The last time Democrats had a majority in both chambers of Congress, plus a member of the party in the White House all at the same time, they enacted the Affordable Care Act (aka Obamacare). As the party sets its eyes on flipping Congress in November and, perhaps, the White House and Senate in following years, there's evidence that suggests a pursuit of universal health care might well be the party's next step.

We need to make sure that the people who have lived these experiences, who have struggled, who have felt this pain, have a seat at the table when we're making policy decisions that affect them more so than anyone else.

If Matias wins the upcoming election, she would become the first-ever Latina from Massachusetts elected to Congress. That potential bit of history is important, Matias says, adding that "representation clearly matters." At the same time, she talks about the strength of her candidacy, saying, "It's not because of my race, it's because I've dedicated my life to being a public servant."

Matias' background as both a public servant and as an immigrant informs her run for office. As the separation of families at the U.S.'s southern border has made immigration policies arguably the most important and divisive political issue, Matias hopes to represent a community that would be directly impacted by those immigration policies in Congress. The young Democrat moved to the U.S. when she was 5 years old and talks about watching her parents work multiple jobs to gain a foothold in their new hometown — Lawrence, Massachusetts, a town with a population that is more than 75 percent Hispanic.

For Matias, what the Democratic party needs to inject in its ranks are politicians who reflect the make-up of communities like hers.

"We need to make sure that the people who have lived these experiences, who have struggled, who have felt this pain, have a seat at the table when we're making policy decisions that affect them more so than anyone else," she tells Elite Daily.

On Sept. 4, Matias will compete for that seat at the table during the Democratic House primary for Massachusetts' third congressional district. Regardless of whether she succeeds in that race or not, her candidacy alone says a lot about where the Democratic party has been and where it's headed — and she could be among the ones to lead the party where it must go if it intends to address the needs of all communities.

More like this
These Tweets About Harris & Pelosi At The 2021 Address To Congress Cheer This Huge Moment
By Rhyma Castillo
Lil Huddy's "America's Sweetheart" Is About Charli D'Amelio, & He Admits It – EXCLUSIVE
By Brandy Robidoux
Sydney Sweeney’s Hint About Cassie In 'Euphoria' Season 2 Will Make You Nervous — EXCLUSIVE
By Abby Monteil
Stay up to date