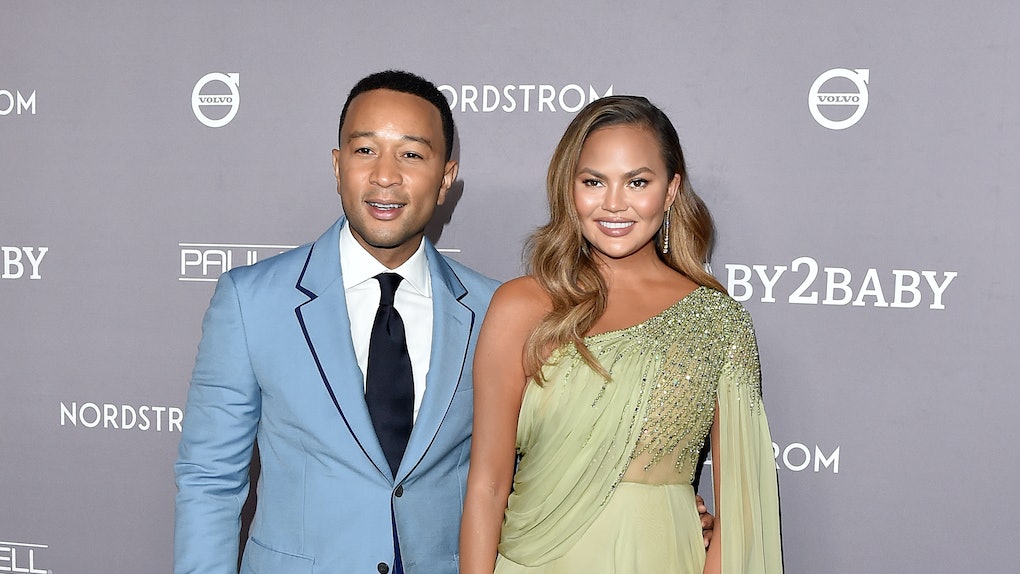 As Chrissy Teigen rang in her 34th birthday on Saturday, Nov. 30, her husband was one of the first to head to Instagram to publicly celebrate the occasion. While fans might know the couple for their hilarious social media antics and playful ribbing, John Legend’s post for Chrissy Teigen’s birthday left the trolling out in favor of the sweetest note. In short, his message is a heartfelt reflection on life with his "queen," and it's making me stan this couple even more.

If you follow Legend and Teigen on social media, you know that they've been upping the hilarity more than usual over the past couple days. Not only has the Lip Sync Battle host been gifting fans a look into the couples' Thanksgiving festivities, but she's been almost non-stop trolling her husband's newfound status as People's Sexiest Man Alive this year, most recently rocking a onesie with the "All of Me" hitmaker's face splashed all over it.

On Saturday, Legend returned the love for his "queen" by striking a more serious but completely heartfelt tone.

"Celebrating my Queen's birthday today," he wrote alongside a photo of the former SI Swimsuit model. "I love you more than ever and I'm so grateful for the life we've built together. Thank you for making every day so amazing. Happy birthday, Chrissy!"

While Teigen has yet to publicly respond to Legend, the post was quickly flooded with messages from fans and friends sending their well-wishes to the star.

Thank you all for the kind birthday wishes. I have everything a girl could ever imagine for. love you love you and thank you for being my friend for the ups, downs and all arounds. goodbye 33, you were an incredible year.

If you've been keeping up with the Teigen-Legend household, you know that the couple has been celebrating the crooner's newfound recognition since the news was announced a few weeks ago. True to form, the mom-of-two has jumped on each and every opportunity to tease her husband about it, initially sharing on Twitter, "My secret is out. I have fulfilled my dream of having boned @people’s sexiest man alive!! an honor!!!!!" The social media guru even changing her Twitter bio to read "De-motivational speaker currently sleeping with people's sexiest man alive" to highlight just how excited she was about the whole thing.

However, she didn't hesitate to let her fans know that she was starting to backtrack on her initial reaction after Legend decided to turn up the heat in a sexy elf costume while making an appearance on The Tonight Show Starring Jimmy Fallon. Luckily for all of us who weren't there to witness the moment IRL, Teigen decided to record the husband then trying to do a sexy dance while in said elf costume — and her simultaneously horrified and disgusted reaction is comedic gold.

She captioned the video, "Sexiest man title has been a curse upon my family."

Something tells me that Teigen is feeling differently after Legend's latest Instagram, and I'd keep an eye on her social media accounts to see if she decides to share how her other half spoiled her for her special day.