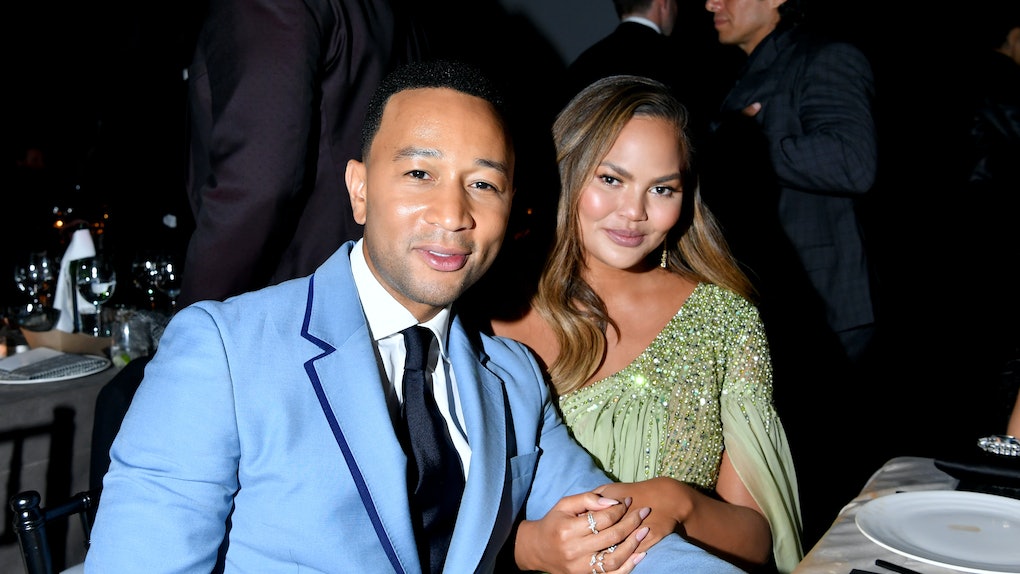 Chrissy Teigen is already over John Legend's "sexiest man alive" status. The Cravings cookbook author looked less than impressed as her husband showed off some sultry dance moves while inexplicably dressed as an elf in an Instagram video on Nov. 21. As is to be expected, Chrissy Teigen's reaction to John Legend's sexy elf dance is priceless.

Legend tried to live up to his People's Sexiest Man Alive title during an appearance on The Tonight Show Starring Jimmy Fallon, but the heat was lost on Teigen backstage as she looked on shaking her head in what looked like literal disgust. "Just another day at @jimmyfallon," Teigen captioned the clip.

Teigen later added the same 13-second video to Twitter and joked: "Sexiest man title has been a curse upon my family."

Jimmy Fallon replied to Teigen's tweet, writing, "I had EVERYTHING to do with this. xo love, Jimothy."

Also not fazed by Legend's dance moves was their 3-year-old daughter, Luna, who made a brief appearance in the video. Luna walked straight toward her dad in the shot, and then quickly turned and headed in the opposite direction of him. Clearly, no one was here for Legend's sexy elf moves.

Teigen has had fun with Legend's sexiest man status since the magazine announced the honor on Nov. 12. The Lip Sync Battle co-host hilariously changed her Twitter bio to read: "Currently sleeping with people's sexiest man alive."

Teigen's reaction to Legend's dance is the opposite of how she initially reacted to the singer's new heartthrob status. "My secret is out," she tweeted on Nov. 12. "I have fulfilled my dream of having boned @people’s sexiest man alive!! an honor!!!!!"

Legend opened up to People about his mixed feelings regarding his sexiest man title. "I was excited, but I was a little scared at the same time because it’s a lot of pressure," he said. "Everyone’s going to be picking me apart to see if I’m sexy enough to hold this title. I’m [also] following Idris Elba, which is not fair and is not nice to me!"

Teigen, meanwhile, braced herself for backlash in the most hilarious way, tweeting that she "cannot WAIT for people to get mad about John being the sexiest man alive."

While people can agree to disagree if Legend's dance was actually sexy, fans can't argue that Teigen crushed the "bored wife" look.