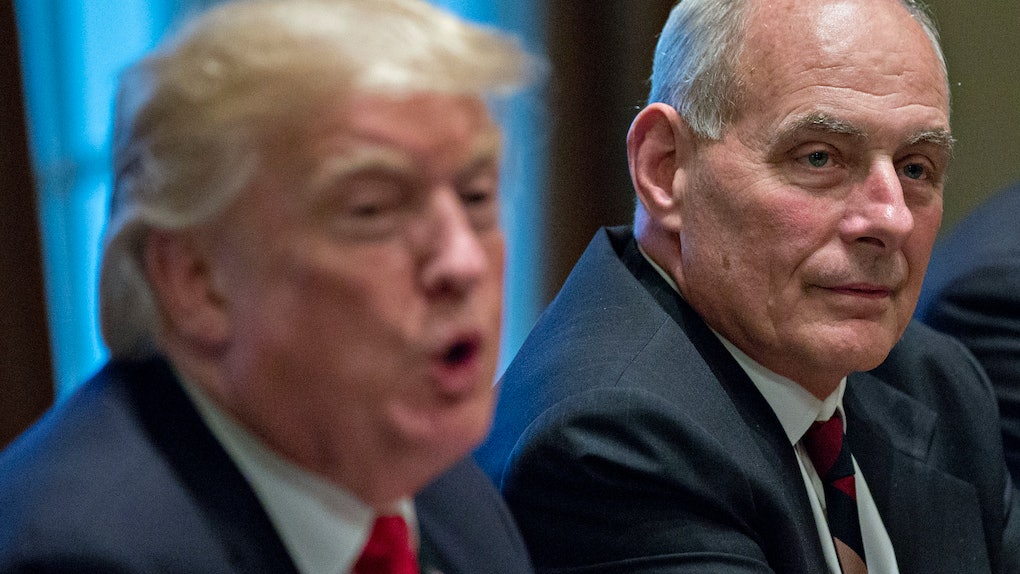 John Kelly's "Sacred" Quote About Women Is All Kinds of Flawed

One tweet says it all, and this one by TV writer Liz Meriwether has been going viral. Responding to White House Chief of Staff John Kelly's quote about women being sacred, Meriwether said everything you need to know about the modern struggle for women's rights in one 140-character statement. We understand why it's been so popular.

She was responding to a speech John Kelly gave Thursday regarding military service members. This was a defense of President Donald Trump following criticism for how he's responded to the deaths of service members, part of a heated dialogue that's ensued after the president falsely claimed that former President Barack Obama did not call or visit grieving families. Kelly's speech focused on men and women in the military, and in criticizing the lack of respect for service members, he said,

You know, when I was a kid growing up, a lot of things were sacred in our country. Women were sacred, looked upon with great honor. That’s obviously not the case anymore as we see from recent cases.

Because it's an exercise worth doing, let's break down what Kelly said.

We'll start by taking this for its logical implications. If women were looked upon with honor, and thought of as sacred, what did that look like?

If Kelly longs for a return to the "Good Ol' Days" in which women were held in high regard, he may be disappointed to learn about the long and consistent history of a society that mistreats women. The era he's referring to — when he was growing up the 1950s-60s — was no less brutal on women, in fact. During Kelly's adolescence, women were by and large still undermined and disallowed from entering the workforce, and if they did make it in, had little recourse for sexual harassment, which was commonplace. They had few rights to protect against workplace discrimination until 1964.

At home, partner violence, abuse, and marital rape (which was legal in the U.S. until the 1970s, after Kelly's childhood) ran rampant with less official recognition or resources to aid victims (some doctors actually saw it as a good thing). Indigenous and minority women were subjected to all manner of abuse (see: the internment of Japanese Americans — a horror that ended just a few years before Kelly was born — which caused major health problems related to trauma), including forced sterilization. And in the public sphere, women have long been holding the same jobs as men (see: surge in women's factory participation during World War II, a legacy which preceded Kelly's childhood), and yet to this day they still comprise about 6 percent of top CEO positions and only about 20 percent of Congress.

So what, then, is Kelly nostalgic for? Is it the sacrality of a woman who is kept out of the public sphere? Or is it the respect and care women receive in that space? Because the latter has yet to happen.

To his credit, Kelly acknowledged that women today aren't doing much better.

Yet Kelly, though he makes himself out to be against this dehumanization of women, is complicit. After all, he's a member of a team that is actively seeking to remove protections for women.

Women continue to be assaulted with astounding frequency — even the most powerful and respected among them, which recent news has only made clearer — with LGBTQ+ women suffering a higher rate. Meanwhile, Kelly's boss, the President of the United States, has bragged about grabbing women by the genitals, is himself mired in lawsuits alleging sexual assault, and has treated a slew of women, among them his former opponent, as less than human. The right of sexual assault survivors in college to pursue action against their assailant just got dealt a blow by Trump-appointed Education Secretary Betsy DeVos, while a legal battle almost never results in a rapist seeing jail time.

Women's mandatory access to birth control under Obamacare was just rescinded by the Trump administration. While Trump and the GOP fight to undo the Affordable Care Act, the childbirth mortality rate is still shockingly high, especially among women of color.

The workforce still discriminates against women with children, and women on average, still earn about 80 cents to every man's dollar in this country — a chasm that widens with race, age, and children. Trump's policies have only worsened the economic and familial responsibilities of women. About one in three women experience domestic abuse, while Trump's budget threatened to take away resources for victims. Transgender women are under attack in the military, courtrooms and on the street; Arab and Muslim women are the victims of hate crimes galore, which Trump's rhetoric has only, arguably, fueled. Immigrant and Dreamer women fear for being deported, thanks to Trump's decision to put DACA on notice, and Kelly himself has considered legislation that would rip mothers away from children, jobs, and homes.

If Kelly is a champion for women, if he believes they should be held sacred, would he get before a podium and condemn all of these denials of women's rights and the people around him who are allowing them to prevail?

My question for Mr. Kelly would be, what do you define as sacred?

Is Kelly's idea of a "sacred woman" one who is taken care of, safely domiciled and out of reach of the horrors of the world, if still exposed to them at home? Or a woman free from fear in the long journey of her life? No matter what his definition ends up being, I'd be curious to learn at what point in U.S. history women have enjoyed an upper hand, or even an equal footing.

And at the end of the day, I agree with the second part of Kelly's sentiment: It's clearly not the case that women are respected and honored in today's world. But how far does his sentiment extend? Will he take action to ensure that some of these wrongs are righted? If so, I'm all for it. But I'm not holding my breath.

As Meriwether so succinctly says in her tweet, women don't need hollow comfort. We need actual changes that help us.

Merely waxing for an imagined past in which women were treated well, without acknowledging the horrors they endured or offering to leverage his power to change the present imbalance, doesn't cut it.