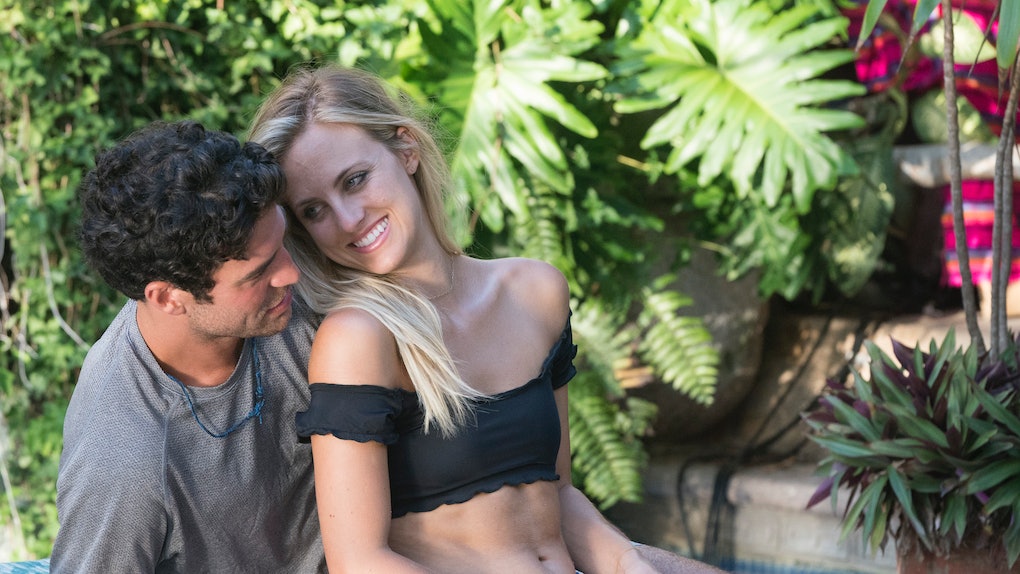 Joe & Kendall's 'Paradise' Reunion Will Make You Sob All Over Again

I can't help it — I was one of the many Bachelor Nation members rooting for Kendall and Joe. The sweet taxidermy-enthusiast from LA and the Chicago grocery store charmer were one of Bachelor in Paradise Season 5's most unlikely and endearing duos. Unfortunately, their courtship came to a screeching halt on Monday's episode when Kendall realized she couldn't take the next steps in their relationship. It was incredibly hard to watch, but Joe and Kendall's Paradise reunion from Tuesday, Sept. 11's reunion special might just turn that frown upside down.

"I feel like when we were talking about being exclusive I got a sense of it being not it being not because we genuninely wanted to, but because we had to," Kendall told Joe on Monday's episode. But Joe explained that just because she got that sense doesn't mean he does too.

Despite everything the couple has gone through — the doubts, conflict, and that whole Leo business — Kendall's heart wasn't in it. At least not in the way she needed it to be. She went on to admit that the kind of love she obviously had for Joe might just not be in the "in love" characterization of the word. Joe's worst fear was realized: She just doesn't feel the same way about him that he does for her. And with that, they both went their separate ways.

Kendall's last moments in Paradise were filled with tears and regret.

"I guess we were friends. I thought we had something way stronger than that," Joe said in the limo. He was clearly shocked by how things played out.

"I have a huge fear that I'm not going to see Joe again," Kendall confessed.

Kendall and Joe's conclusion unfolded like the penultimate scene of an intense rom-com where someone expresses what could have been right before they're reunited to give way to a happy ending. But that happy ending never came on Monday's episode. Kendall's limo went one way and Joe's went another... driving into the pitch-black Mexico night with no passionate resolution. Did they get their fairytale ending on Tuesday? As it turns out, anything is possible in Paradise. Or technically, outside of Paradise.

Kendall took to hot seat opposite Chris Harrison to articulate her remorse, saying,

Right afer he walked away because he had said so many things. Hearing those things made me realize like, 'wow, I'm running away from what could be the best thing that's ever happened to me.' I kept replaying over and over in my head things I could have done, things I could have said. I could have chased after and I just didn't. I just let him walk away and that was one of the biggest things I regret.

Here's the good news: They saw each other again. And then some! After Paradise, Krystal hopped a plane Chicago to talk to Joe (rom-com style) and explain herself.

"The reason I was holding back so much is because I am in love with you," she told him before he said that's all he ever wanted to hear." Of course, trust had somewhat been broken... but that doesn't mean they were.

They're together, guys! "I love her," Joe said.

"Right now we're in a good spot," he added, before confirming Kendall's indeed his girlfriend. The long distance pair are currently "taking it day by day," but hopefully they'll be in the same place all the time soon. It looks like he's taking that Dancing With the Stars gig afterall.