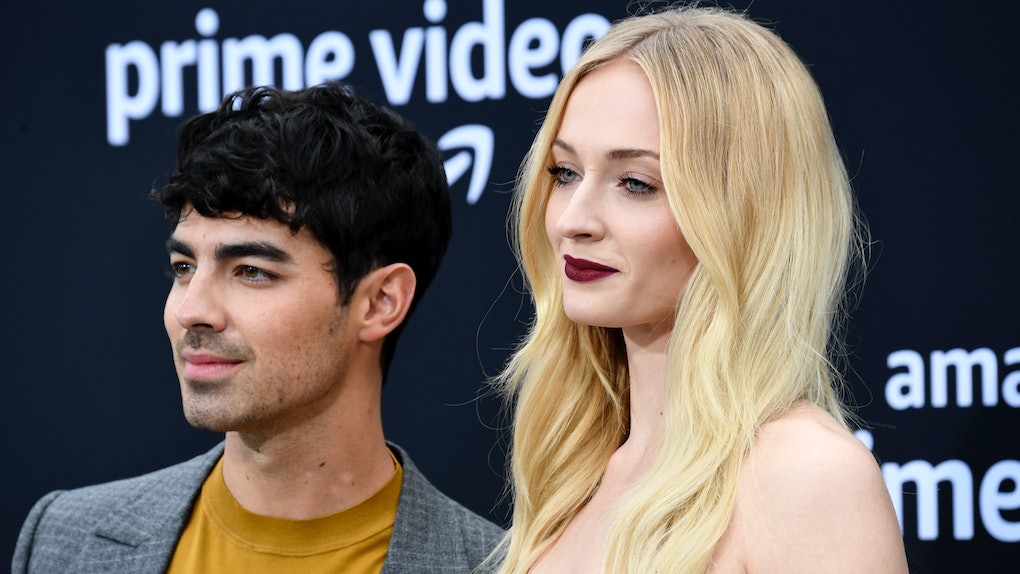 They're married — again! Following their Las Vegas chapel ceremony on May 1, Joe Jonas and Sophie Turner's wedding in France on Saturday, June 29 proves that two sets of nuptials are twice as nice. According to Vogue, the Happiness Begins singer and Game of Thrones star have reportedly tied the knot in a symbolic ceremony at Le Chateau de Tourreau in Provence in front of family and friends. Elite Daily reached out to representatives of Turner and Jonas for comment, but did not immediately hear back.

Per Today, the wedding ceremony, held at the absolutely stunning Chateau de Tourreau, featured Jonas' brothers Nick, Kevin, and Frankie as groomsmen, while on the other side, Turner's bestie and Game of Thrones costar Maisie Williams was a bridesmaid. Even better? The couple's dog, Porky, reportedly made an appearance in a tiny tuxedo (!!). The bride reportedly wore a Louis Vuitton gown with a V-neck, while the groom kept it classic in a black suit.

Previously, Turner told Net-A-Porter that the couple wanted to keep the second celebration "as low-key as possible," explaining, "It’s not about the dress, it’s not about the food. It’s about being husband and wife, and being dedicated to each other forever." That said, Us Weekly reported that the couple wanted the event to feel "like a huge party," and planned to have a live band at the reception, and that the Jonas Brothers would take the stage for a performance; that reportedly didn't happen, but it was clearly a star-studded affair nonetheless. While Turner wore a white jumpsuit for her first wedding, she opted for a classic gown at her second.

This wedding comes on the heels of the Las Vegas wedding because the couple reportedly needed to wed in the United States first in order to make the marriage legal, according to People.

In November 2018, life coach Mike Bayer accidentally revealed the couple's plans for a French destination wedding when he posted a now-deleted Instagram Story of the wedding invitation, which reads, "Sophie and Joe 2019 France." That wasn't the only wedding guest slip-up — Dr. Phil spilled the wedding date in a comment on Turner's Instagram of her in a romantic embrace with Jonas. "Easy now! 1 week to go!" he wrote on June 22, according to InStyle. "Ha! See you at the wedding!"

Dr. Phil's reveal of the wedding date didn't seem to put a damper on the couple's enjoyment of the week leading up to their wedding. People reported that they enjoyed dinner with friends and shopping in Paris, the City of Love.

Jonas and Turner met through mutual friends and began dating in late October or early November 2016. They made their first red carpet appearance together at the Met Gala in May 2017. In September, the relationship got even more serious when they adopted an adorable puppy together. The following month, on Oct. 15, 2017, the couple posted matching photos of their hands clasped together, drawing attention to the pear-shaped diamond engagement ring on Turner's ring finger. "She said yes," Jonas captioned the photo, while Turner wrote, "I said yes."

Jonas and Turner's weddings were full of romance, family, and fun — not that you'd expect anything else from this incredibly sweet, fun-loving couple.