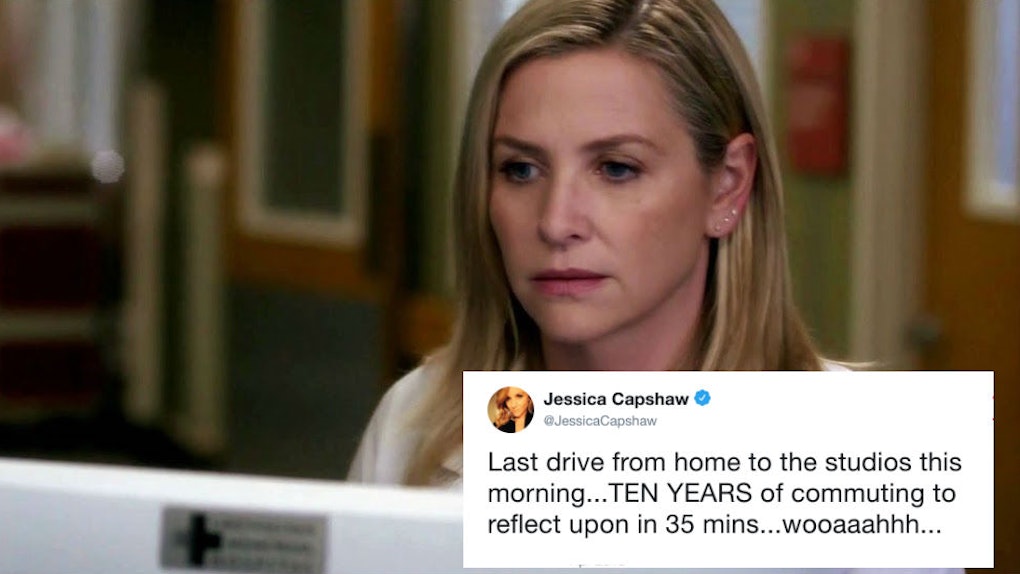 We are getting closer and closer to the Grey's Anatomy season finale, and that is a sad feeling for a number of reasons. For one, the medical drama always pulls out all the stops when it comes to delivering an emotional finale, but for most fans, the most heart-breaking part of the Season 14 finale will be having to say goodbye to Dr. Arizona Robbins. Arizona actor Jessica Capshaw's Twitter farewell to Arizona on Grey's Anatomy is making fans of the character even more upset that we'll have to see her go.

Last month, it was announced that Jessica Capshaw will be leaving Grey's Anatomy following the Season 14 finale, meaning no more Arizona Robbins. Along with the departure of Arizona, fans are also going to have to bid farewell to April Kepner, as actor Sarah Drew is leaving the show as well.

What makes the departure so emotional is how attached Grey's Anatomy fans have grown to the character of Arizona Robbins. She was first introduced as a bubbly doctor back in Season 5, and has since grown into one of the central characters in the series. Most notably, Arizona's relationship with fellow surgeon Callie Torres became a fan favorite romance, as we watched the couple fall in love, get married, and raise a daughter together. But sadly, Arizona and Callie got divorced and entered a custody battle over their daughter Sofia, which ended in Arizona winning sole custody, but then decided to split custody with Callie for Sofia's sake. Callie then left Seattle to go live in New York with Sofia.

And now, it is about to be Arizona's turn to say goodbye to Seattle Grace Hospital. Jessica Capshaw is just as emotional about the big farewell as all the Grey's Anatomy fans are. When the news first came out last month, Capshaw shared a statement about what playing Arizona has meant to her and to viewers:

More recently, Jessica Capshaw shared what the experience driving home from the set of her final day filming Grey's Anatomy was like:

Although it sounds like it's a wrap for Jessica Capshaw for filming Grey's Anatomy, fans are still going to have to wait a month for the Season 14 finale, which will be entitled "All of Me." Until then, there are still four new episodes leading up to the big farewell, and the favorite activity among fans to pass the time is to theorize how Arizona will leave Grey's Anatomy in terms of story.

There are a lot of theories about how the show will be saying goodbye to Arizona Robbins. Some fans think that she will win a research grant to move somewhere to further her career, while other think that Grey's will return to its more melodramatic past and kill off Arizona somehow. But the most prevalent and convincing guess among the fandom is that Arizona will likely decide to move to New York in order to be closer to her daughter, Sofia. That storyline also opens up the possibility of a Callie-Arizona reunion for the finale episode, which would obviously be an exciting moment for viewers who have missed the couple.

However she goes, Arizona Robbins has been a bright light for Grey's Anatomy fans for a decade now, injecting the series with both welcome levity and deeply felt emotional drama since Season 5. You can be sure that her final scene in the Season 14 finale episode will be one to remember, so start stocking up on tissues now.

The Season 14 finale of Grey's Anatomy will air on Thursday, May 17 on ABC.