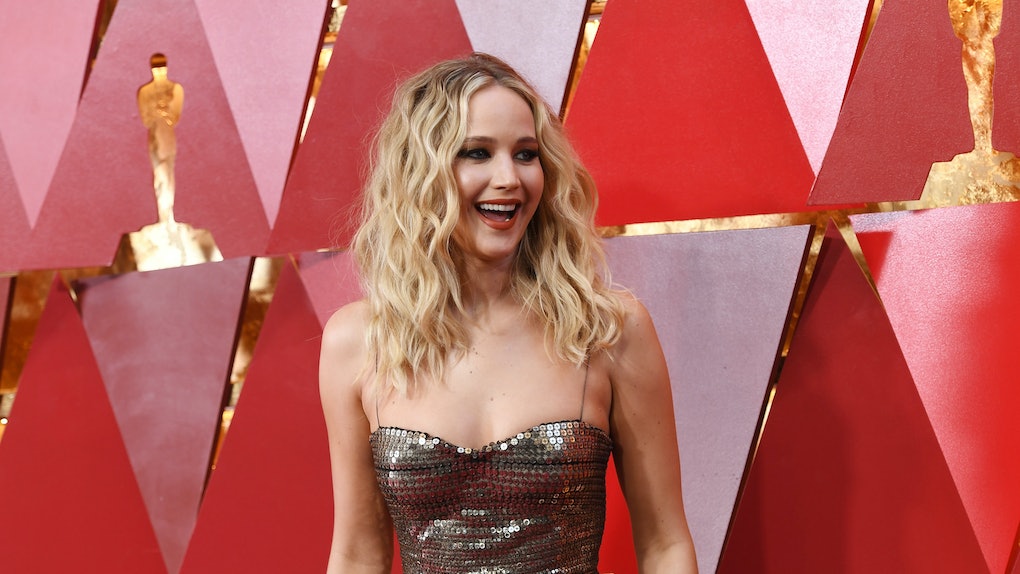 Jennifer Lawrence has done it again — and by "it," I mean she's once again been incredibly honest about the pressures of certain beauty standards in Hollywood, and how she never lets them dictate her own lifestyle. The accomplished actress and all-around positive role model first stole my heart back in 2012, when she told Elle she would never "starve [herself] for a part," and that she doesn't "want little girls to be like, ‘Oh, I want to look like Katniss, so I’m going to skip dinner.'" True to her inspiring perspective, Jennifer Lawrence opened up about exercise and dieting in a new interview, and she couldn't have gotten more real.

Lawrence recently sat down for an interview with Vogue, and as per usual, the 28-year-old actress was nothing short of honest about how she takes care of her body. She admitted, "I don’t like when people say, 'I only do this or eat this.'" She told Vogue that she always makes sure she isn't restricting her food:

Despite her relatable love affair with pizza and her healthy approach to food overall, J. Law isn't oblivious to the expectations that are often placed on her because of her celebrity status. Coupled with her balanced mindset around eating, Lawrence told Vogue she sticks to a steady workout routine to keep her body strong. "I get photographed when I’m not asking for it, so there’s added pressure to look and feel your best," she explained. "For me, it’s easier to put that extra effort into the gym instead of putting the extra effort into: ‘Oh no, I can’t eat that.’”

J. Law also took a moment during her Vogue interview to claim responsibility for and agency over her own body by explaining that she makes conscious choices to make her body look a certain way, not for the sake of pleasing anyone else, but because it's genuinely what she wants for herself. "I do work out more than normal because I have a certain way that I want to look, and a way that I want to fit into my clothes," she told the magazine.

However, Lawrence's fitness regimen isn't just about aesthetics, as evidenced by many of the acting roles she chooses. For example, in her recent role in Red Sparrow, J. Law plays a professional dancer who turns into a secret intelligence agent. The character is physically very fit, and so Lawrence made sure to choose workouts that would help her get stronger in order to best embody the role. While she completed intensive ballet training for three hours a day to build the strong muscles of a ballerina, she admitted to Vanity Fair that she needed proper nourishment in order to support her busy schedule. “I can’t work on a diet," she said. "I’m hungry. I’m standing on my feet. I need more energy.

If there's one thing J. Law is — aside from an inspiring role model and incredible actress — it's self-aware. In a 2016 interview with Harper's Bazaar, she pointed out the slightly problematic nature of how people talk about her body in comparison to others'. "Everybody says, 'We love that there is somebody with a normal body!'" she told the magazine. "And I'm like, 'I don't feel like I have a normal body.' I do Pilates every day. I eat, but I work out a lot more than a normal person. I think we've gotten so used to underweight that when you are a normal weight it's like, 'Oh, my god, she's curvy.'"

No matter what her body, her workout routine, or her daily eating habits look like, Jennifer Lawrence's consistent honesty about her choices and struggles makes her a total inspiration — also, someone who'd be very fun to eat pizza with.

More like this
These 40 Clever Vaccine Selfie Instagram Captions Deserve A Shot On Your Feed
By Rachel Chapman
Chrissy Teigen's Quotes About Giving Up Dieting Are So Refreshing
By Brandy Robidoux
I Tried Singing While Running Like Miley Cyrus & OMG, My Lungs
By Rachel Varina
Stay up to date