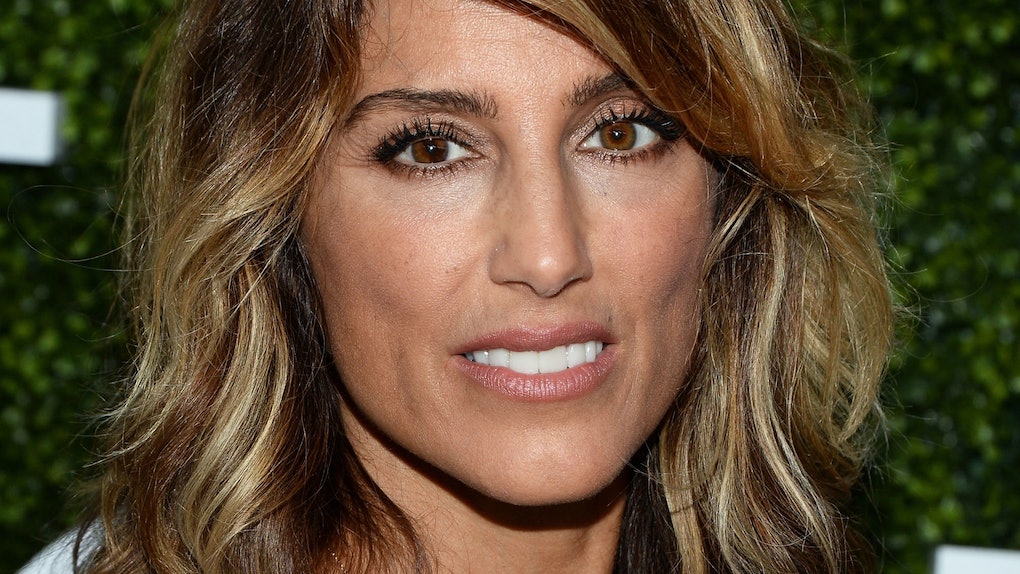 Jennifer Esposito, Bradley Cooper’s Ex, Is An Actress & Here’s Where You’ve Seen Her Before

Following Cooper's passionate performance of "Shallow" with his A Star Is Born co-star Lady Gaga at the Oscars on Sunday, Feb. 24, comedian David Spade posted a screengrab of the ASIB stars with the caption, "Is there any chance these 2 aren't f*cking?" Esposito must have found the post funny because she commented on it, "Ha." It's a pretty innocuous response — but it went viral in a big way.

Yep, that's all she wrote. Two letters and one period. Those three characters were enough to pique the interest of fans across the country and even snagged her a spot on the @CommentsByCelebs account.

Since the frenzy around her comment, Esposito has spoken out and explained that she meant nothing by her comment and she basically wants everyone to chill TF out.

So, now that we've got all of that sorted out, let's talk about who Jennifer Esposito really is.

In addition to her roles on television shows such as The Affair, Law & Order: Special Victims Unit, and Blue Bloods, Esposito has also had a role in the Oscar-winning movie Crash.

Esposito is the author of three books. Her first book, Jennifer's Way: My Journey with Celiac Disease--What Doctors Don’t Tell You and How You Can Learn to Live Again, details her struggle with Celiac disease and explains how she became healthy again.

Then, of course, there's her third book, Jennifer's Way Kitchen: Easy Allergen-Free, Anti-Inflammatory Recipes for a Delicious Life. This one is a cookbook filled with healthy recipes that may help readers find their way to a healthier life.

Wondering how she had the creds to write a cookbook? Esposito used to own a healthy bakery in New York City's East Village.

She has Celiac disease.

Remember when the #10yearchallenge was a thing? Esposito posted a pretty serious one.

Decided to use the #10yearchallenge to educate actually- the first pic is me 10 years ago when celiac disease was nearly killing me. My kidneys at this point were a mess and all my eyelashes had fallen out due to such severe inflammation due to constant allergic reactions to everything because of leaky gut. The left is a few days ago. When you feel hopeless in your journey with your health remember this pic. FOOD, the wrong food for me, made me this way and then the right food changed it all again and saved my life!! Zero meds, just healing my gut through food! Pls join me at ChewThis.life will be sharing all. #foodismedicine#chewthis#foodforlife#celiacdisease#celiac#leakygut#healyourgut

She has her own podcast.

When announcing her podcast, Chew On This, she wrote on Facebook:

It’s here!!! My podcast,Chew On This, with Jennifer Esposito. We eat, we chat, we Chew! It’s always been my belief that food is powerful! Not only to your health but also the power of making it, then sharing it around a table with others. I will do just that, make food to be shared with my guests to spark conversation. I speak to actors, doctors, therapists and just everyday people all in the hopes to share a meal and speak about our differences and what makes us the same. I speak about my own journey as well. Raw, honest, unapologetic and ultimately hopeful. Life, love, politics and health are all on the menu. Pls come join me, everyone is welcome at my table.

New episode drops every Monday. Once a month I will be joined by Dr Patrick Fratellone calmed The Doctor Is In, where the focus is just health related. We will open up to questions in the near future.

Go to wherever podcast are and subscribe!!!!! Go to Www.ChewOnthis.life for all info and join the family and you will also get the recipe to what I’ve made that episode.

She's spoken out against the overt racism she's faced in Hollywood.

"Have a question for my actor friends," she wrote on a Facebook status in August of 2018. "Ever get totally blocked by casting directors?"

"I did a play as a young just starting out actress and a more established actress in the play told me- 'change your last name' she was 10000% right," she continued in the comments section. "It was Marisa Tomei. She knew what she was about it. In the last month I was told I was not white enough for 5 different projects."

Yes, she was once married to Bradley Cooper.

The two were married on Dec. 21, 2006 and divorced just four months later.

She's also probably a million other things that don't involve her ex.