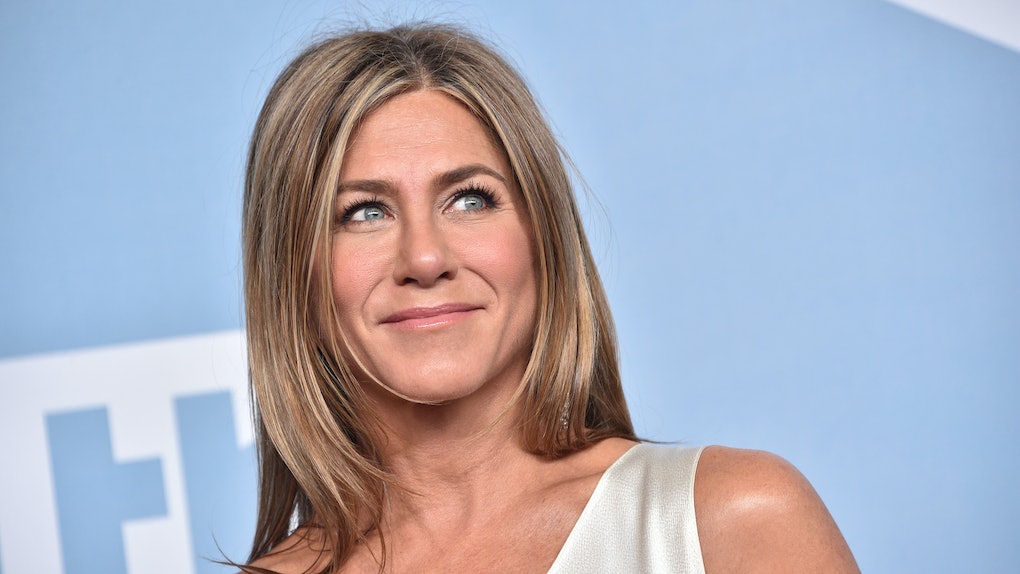 Jennifer Aniston wants everyone to take the 2020 presidential election seriously. With election day less than two weeks away, the Friends alum pointed out what’s at stake, and she took aim at anyone making light of it by voting for Kanye West. Jennifer Aniston's Instagram about not voting for Kanye West is really blunt, but she makes a good point.

On Friday, Oct. 23, Aniston's Instagram post included a carousel of photos of her in blue sweats and a mask standing next to an official ballot dropbox with her ballot in hand. In the third photo, she's back inside showing off the "I voted" sticker on her phone case. The actor captioned her post, "#IVOTED for @joebiden and @kamalaharris. I dropped my ballot off, and I did it early. I voted for them because right now this country is more divided than ever."

She continued "Right now, a few men in power are deciding what women can and can't do with their own bodies. Our current president has decided that racism is a non-issue. He has repeatedly and publicly ignored science… Too many people have died."

"I urge you to really consider who is going to be most affected by this election if we stay on the track we’re on right now… your daughters, the LGBTQ+ community, our Black brothers and sisters, the elderly with health conditions, and your future kids and grandkids," she wrote. Aniston then noted that the next generations would be the ones "tasked with saving a planet that our leadership refuses to believe is hurting."

In her final paragraph, she said, "This whole thing isn't about one candidate or one single issue, it's about the future of this country and of the world. Vote for equal human rights, for love, and for decency."

After her powerful conclusion, she had one final message about a famous write-in candidate. "P.S. — It's not funny to vote for Kanye. I don't know how else to say it. Please be responsible."

West announced his presidential run on July 4. After his announcement, he made a slew of posts on Twitter that had fans concerned. One of these was the claim that West's been wanting a divorce from Kim Kardashian for over a year. The red flags began after West's rally in Charleston, South Carolina, on July 19, when he revealed intimate details about his family life in an emotional address.

After fans began voicing concern, Kim K defended him in an Instagram post on July 22, pointing to his mental health struggles. “As many of you know, Kanye has bipolar disorder," she wrote. "Anyone who has this or has a loved one in their life who does knows how incredibly complicated and painful it is to understand," she continued. "I’ve never spoken publicly about how this has affected us at home because I am very protective of our children and Kanye’s right to privacy when it comes to his health. But today, I feel like I should comment on it because of the stigma and misconceptions about mental health."

She finished her post, writing, “People who are unaware or far removed from this experience can be judgmental and not understand that the individual themselves have to engage in the process of getting help no matter how hard family and friends try."

West began his campaign for office too late in the game to make it on most ballots. ABC News noted he is only on the ballot for 11 states, so West has been encouraging his fans to vote for him as a write-in candidate.

There are only a few days left until Election Day, so if you're voting, make sure you have your voting plan mapped out.