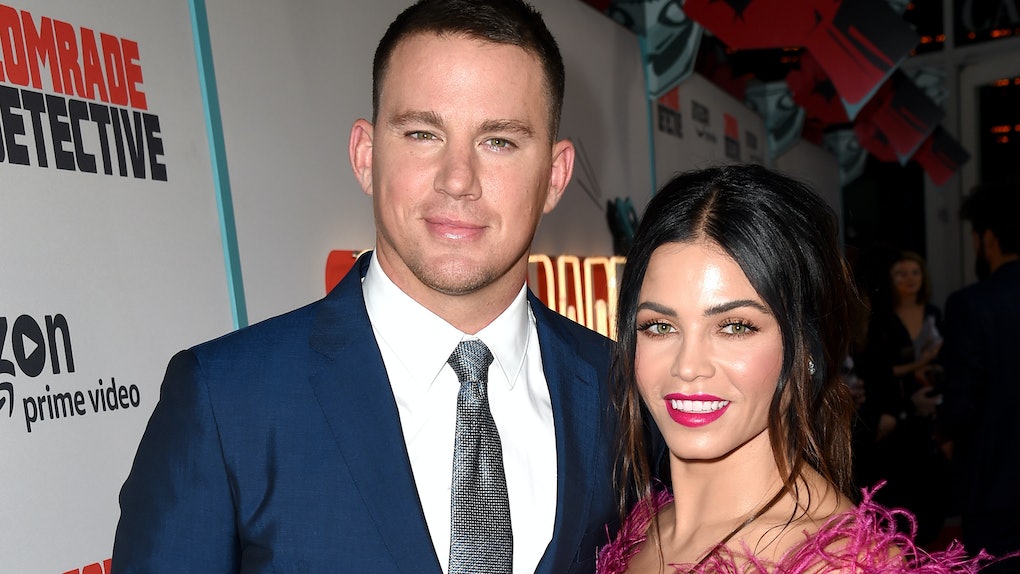 For those who have followed a long celeb romance from the beginning to the end, sometimes it can feel like such a disappointment when the couple splits — almost like you're going through it along with them. That was certainly the feeling shared by many who were on board with the sweet romance between Jenna Dewan and Channing Tatum. The pair were married for nine years, had met on a movie set, and then suddenly announced their divorce. Now she's releasing a book, and TBH, Jenna Dewan's comments on Channing Tatum and Jessie J are brutally honest.

Until now, the couple has been kind of hush-hush about their April 2018 divorce announcement and the end of their Hollywood romance. But now, Dewan is relasing her book, Gracefully You: Finding Beauty and Balance in the Everyday, and she's letting all of those real feelings out. The book itself is set to drop on Oct. 22, but E! News released a feature with an excerpt from Jenna Dewan's book, and the comments reveal just how difficult it was for Dewan to move on from the split and accept her new life.

Although no one probably imagined that this was easy for Tatum or Dewan, sometimes the spotlight can make a celeb split feel a little dehumanized. And of course, fans looking at a relationship from the outside can never understand the reality of the situation on their own. No one really knows the full extent, feelings, and emotions behind a breakup unless they are in it.

The pair have both managed to move on from the experience, but in her new book, Dewan opens up about the difficulties she went through. Dewan discussed her reaction to her divorce from Tatum, saying, "I was just gutted. It was so difficult for me. It was the loss of an idealistic future for myself and my life... I met him when I was 24, I didn’t know life without Chan."

The pair had met on the set of Step Up in 2006, started dating pretty quick after that, and by September 2008, Tatum and Dewan were engaged. But in April 2018, the celebs shocked fans with a joint statement on social media confirming their separation. The statement was also focused on their commitment to "be loving, dedicated parents to Everly," their daughter.

Dewan opened up about her struggles in coming to terms with the split, personally. She wrote, "The separation tested me in ways I hadn't thought possible. I started to wonder if everything I believed in and always talked about was real. Could anyone or anything ever be trusted?"

And furthermore, the publicity in the media didn't help, as she recalled that "the rumor mill was churning out story after story." Dewan said the pain, at that point, hit "like a tumbling avalanche" and she was "completely overcome with fear and sadness."

Shortly after the pair publicly split in April 2018, Tatum and Jessie J went public in October of 2018 with their relationship. Seeing your ex move on so quickly after such a long relationship would surely sting for anybody, and even more so in the public eye. Sounds pretty awful.

But Dewan found love just a little while after Tatum, with Us Weekly confirming Dewan's relationship with actor Steve Kazee on Oct. 30, 2018.

In her book, Dewan also admits it was hard to refrain from retaliation at from that moment she first learned of Tatum's new romance. "Do you know how many times I've wanted to go online and write exactly what's on my mind? Thousands. My instinct is to fight back, set the record straight." But she chose instead to go the graceful route, and TBH, many of us could learn so much from this. Dewan goes on to say it was "quite a challenge to remain graceful to say the least," but she was also mature in her thinking process, stopping herself based on what she "would want [herself] to live with a week from today" and what she'd "want Everly to read when she's older."

Her book sounds like such an inspirational read. Dewan managed to take the high road, but she's doing it in a way that is still brutally honest about her relationship with Tatum. And through the struggles, there is great news for Dewan. She has been able to move on and become stronger for what she went through, and now she's releasing a book from Simon and Schuster and expecting another baby with Kazee. You can grab a copy of Jenna Dewan's book when it hits stores on Oct. 22 to read more.