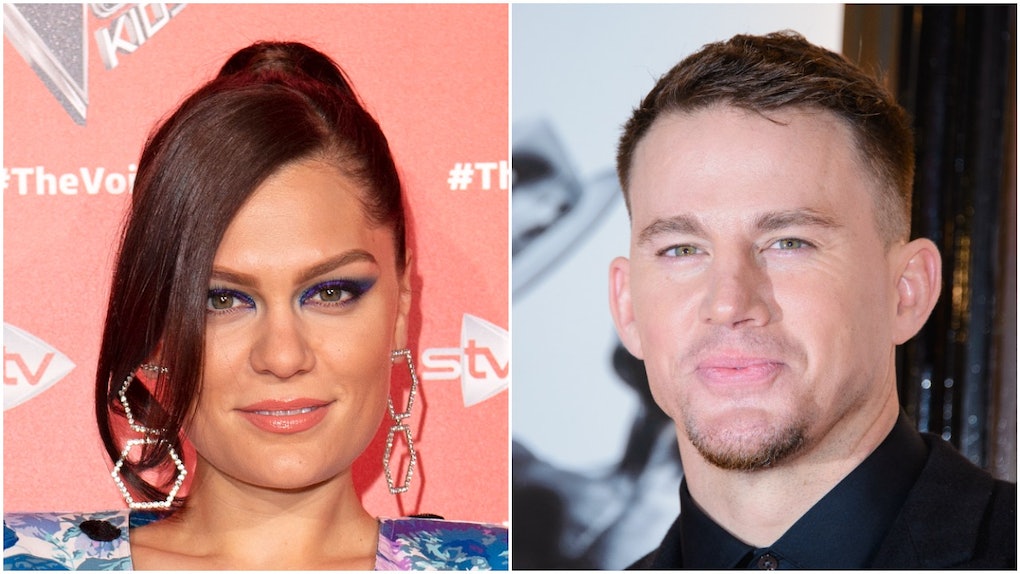 Aww, now this is what I call romance. Jessie J is totally into Channing Tatum and she's not afraid to show it using her amazing voice. So much so, she wrote a little something-something about her actor boyfriend and it's so sweet. Like, you gotta hear Jessie J's love song for Channing Tatum.

On Sept. 22, Jessie J performed at the Troubadour in Los Angeles. The event was said to be small and intimate, featuring performances from her and the winners of her singer-songwriter competition Rose Challenge.

According to People, as the night went on, the "Bang Bang" singer referenced her boyfriend Tatum (who was also in the audience) many times, giving him “plenty of shout-outs." Oh, and a special song. According to the outlet, the track was seriously romantic. Just take a look at the lyrics below:

Where you go I know I want to follow / Let’s make a promise on today / Take it slow, baby steps so we don’t know when what comes next / Let’s be still, just stay calm, so we’re not rushing what we are / Pressure on, just have fun / It’s not a race, no need to run / If it’s forever / Let’s just simply be in love

And, here is a fan captured video of her performance:

Is anyone else clutching their heart? These lyrics are so honest and vulnerable and she's singing them to an entire crowd with her bae present. That means just one thing: Jessie J is in love love, y'all. It's so cute that she did this considering she doesn't post about Tatum often on the 'Gram. Although, when she does, she goes hard.

In July 2019, Jessie J shared three photos of herself and Tatum on date night. The snaps were super cute, except for one rather risqué one. Jessie J's tongue wa nearly licking Tatum and he seemed rather pleased with the situation, flashing a coy smile. I can tell they have fun with one another.

While the two entertainers are enjoying each other's company and falling in love, Jessie J has made sure to let fans know she isn't planning on rushing into marriage with the Magic Mike actor anytime soon.

In June 2019, Jessie J appeared on UK's Heart Breakfast with Amanda Heaton and Jamie Theakston and commented on marriage rumors, saying, "No, just because he’s Channing Tatum everyone’s kind of sped us up into this like, 'Are you getting married? Are you doing this?'" she said to the hosts.

"I mean I’ve been in relationships for a lot longer than Chan and I have in the last four, five years but they’re not famous so no one really cares," she added. She's got a point. She shouldn't have to rush things just because she is in the public eye.

"We’re having a lovely time. And I’m very very respectful of his situation..." she explained, most likely referencing Tatum's divorce from Jenna Dewan in October 2018. The exes were married for nearly nine years and share a daughter.

Jessie J clearly wants the couple to move on their own terms and when the time is right for all parties. Fans may not hear wedding bells ringing anytime soon, but this new song seems like it'll be just fine — for now.

More like this
'Shadow And Bone' Star Jessie Mei Li Can't Stop Watching These Niche YouTube Videos
By Abby Monteil
Channing Tatum's Quotes About Being Paid To Work Out & Stay Ripped Are So Real
By Sydney N. Sweeney
Ashley Tisdale's First Photos Of Baby Jupiter's Face Will Make Your Heart Melt
By Sydney N. Sweeney
Stay up to date