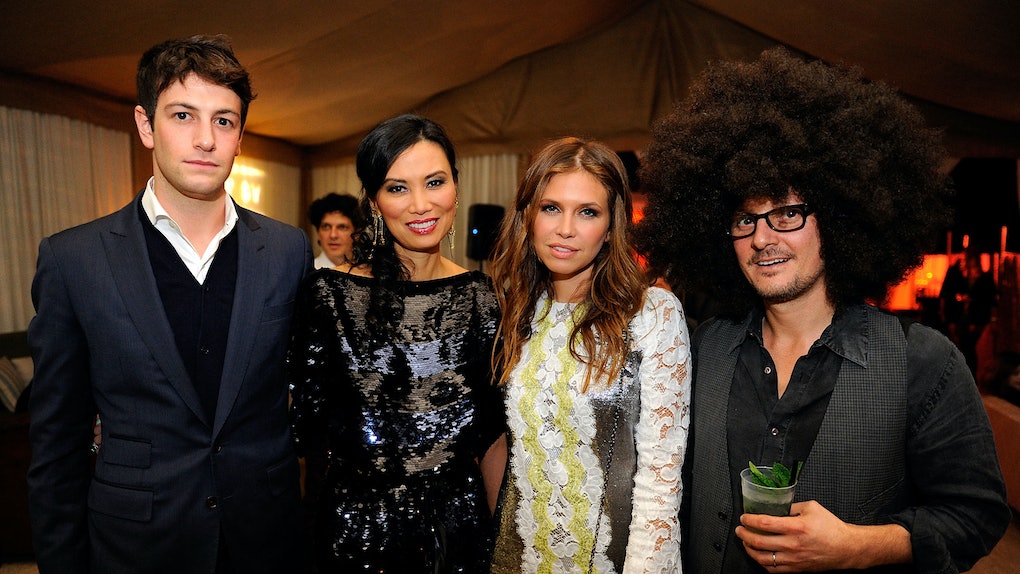 Some pretty big names showed up to share their support during the March 24 anti-gun violence rally March For Our Lives, including Kim Kardashian, Demi Lovato and Miley Cyrus. And even people who weren't able to attend the event still managed to tweet heartwarming messages to the protesters. (*cough* Obama *cough*) But some of the most prominent people you probably expected to at least share a few words of encouragement were nowhere in sight: President Donald Trump was busy golfing in Florida, accompanied by his wife, Melania and their son, Barron. And his trusted adviser and daughter Ivanka Trump was out preparing for her son's birthday party alongside her hubby and fellow senior adviser to the president, Jared Kushner. As a family who's pretty open to sharing their thoughts on various matters via social media, it seemed like they were intentionally avoiding addressing the protests altogether. However, one family member made his stance on the protests very clear: Jared Kushner's brother was at the March For Our Lives in Washington D.C., front-and-center, and I'm completely here for it.

On March 24, hundreds of thousands of people took to the streets around the country to protest gun violence after the tragic Feb. 14 school shooting in Parkland, Florida that resulted in the deaths of 17 people. Jared's younger brother, Joshua Kushner, also attended the flagship march in Washington D.C., standing in solidarity with the increasing calls for tougher gun laws and school safety precautions. He was accompanied by his girlfriend, Karlie Kloss, and shared a picture of the supermodel holding a sign that read, "Load Minds Not Guns" to his Instagram page.

Kushner's already expressed his support for the march. In the days before the march, Kushner reportedly donated $50,000 to the event, and as if that weren't enough, he also shared an empowering pledge to march with protesters via Instagram after his hefty contribution.

That's what it means to show up and show out, my friends.

He's supported much more than just March For Our Lives.

Back in January of 2017, Kushner was spotted at the Women's March, which was not only organized with a focus to get more women officials elected into office, but also in resistance to Trump's election. Kushner, a long-term Democrat, was reportedly there as an "observer," but considering how closely his brother works with the president, his appearance was pretty shocking (or refreshing) to some.

Others close to the White House have also supported the latest rally.

On March 24, the president's 24-year old daughter Tiffany Trump reportedly "liked" an album of pictures at New York's March For Our Lives rally, including one showing a protester who was holding a sign that read, “Next Massacre Will Be the GOP in the Midterm Elections,” which honestly gave everyone life.

The Washington Post also reported that the White House gave a statement commending the protesters for exercising their rights in the March For Our Lives. “We applaud the many courageous young Americans exercising their First Amendment rights today,” White House spokeswoman Lindsay Walters said via statement on March 24. She added that “keeping our children safe is a top priority of the President’s.” (So maybe he took his golfing trip to reflect on what to do next?)

The event was actually born out of lack of action on the topic of gun safety by legislators and politicians. Part of the event's mission statement reads,

March For Our Lives is created by, inspired by, and led by students across the country who will no longer risk their lives waiting for someone else to take action to stop the epidemic of mass school shootings that has become all too familiar. In the tragic wake of the seventeen lives brutally cut short in Florida, politicians are telling us that now is not the time to talk about guns. March For Our Lives believes the time is now.

At least Kushner gets it. Now if only he could get the rest of his family to catch on to these kinds of important causes...