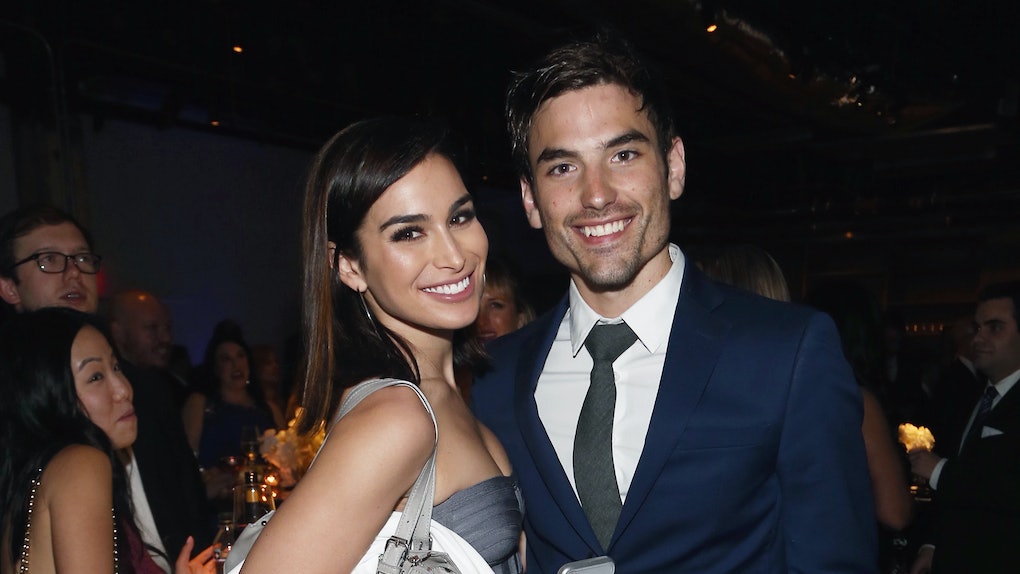 More often than not, reality TV shows are notorious for depicting romance in a sensationalized and unrealistic light. The Bachelor franchise, in particular, is regularly criticized for the over-the-top way in which it sells the experience of falling in love and effortlessly transitioning into a happily ever after that rarely lasts. But, fortunately, the franchise has manged to bring together couples like Jared Haibon and Ashley Iaconetti, whose love story doesn't fall into the cookie-cutter category of perfection. Jared Haibon's quotes about Ashley Iaconetti are so relatable, particularly because they paint a picture of a romance that has been years in the making, as opposed to the seemingly overnight engagements we've become so used to witnessing.

Jared and Ashley met while on season two of Bachelor in Paradise, but by the end of the show, their relationship remained mostly platonic. This was particularly interesting considering that Jared was very honest about the fact that he wasn't feeling as strongly about Ashely as she was about him. I'm sure we can all remember the last time we fell in love with someone who wasn't on the same page as us, and it's pretty tough. Fortunately for them, requited love actually was in the cards. Three years after they met on Bachelor in Paradise, the couple decided to give a relationship between the two of them a shot, and now, they're engaged! Even from the start of their friendship, Jared has said some very honest and sweet things about Ashley, and it is so heartwarming.

He was aware of some of Ashley's shortcomings, but still appreciated who she was deep down.

"It's not that difficult to be sweet to Ashley I.," Haibon told People in 2016, as their not-yet-official flirtation-ship began. "She can be a little possessive, [but] that is something I very much adore about her."

He was completely honest about how he was feeling.

"I never felt like it was over between us after Paradise. I'm not gonna lie and say that I was in love with Ashley [at first]. It was a slow build for me."

— Haibon revealed in Iaconetti's web series, The Story of Us.

He even watches her favorite TV shows without complaining.

“She makes me watch Say Yes to the Dress — but that’s okay, I don’t mind."

Once they became official, Jared started to realize that they could go the distance.

“As soon as we started dating, we both knew that this isn’t just for us to date as boyfriend/girlfriend — this was more so we were going to date because we see a potential life partner in each other. We’ve talked about it but we’re just dating right now, we’re enjoying that. We literally just announced our relationship. The thing is, we’ve been so close for the past three years, I just know her inside and out. I know everything about Ashley."

— Haibon to People, on the serious potential they see in each other.

He's so in love and happy to be done with dating.

"It feels good to know I'll never go on a first date again." Haibon told E! News. "We just went to Hawaii last weekend and we spent six straight days with each other. Pretty much every minute of those days and then when I left her for the first time I was just like, 'I don't want to leave you.' That was a big moment for me when I said this is life long, life partner stuff."

He knows it's still early-on in their relationship, but they're settling in really well.

— Haibon on a recent episode of his Help! I Suck at Dating podcast

Aww, this love is beautiful! Plus, there's something super satisfying about the fact that Ashley knew exactly who and what she wanted from day one, and she actually got it in the end. Their relationship is also a testament to the fact that two people can start off in different places with one another emotionally, but that doesn't mean that a relationship can't grow into to the point where both people are on the same page. Take notes, y'all!