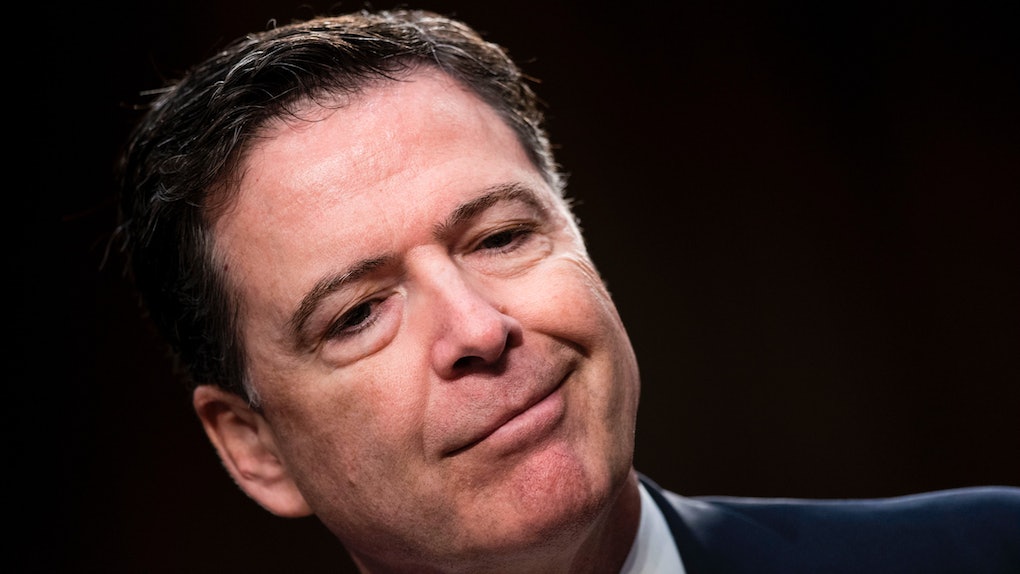 There’s nothing quite like a savage burn, unless it’s a savage burn that’s so subtle that you’re not even quite sure whether it’s a burn or shade. While everyone online was weighing in on the news that the first charges had been filed in the investigation into possible collusion between Russia and the Trump campaign, using memes or commenting about where it might go next, one person quietly sat back and let loose the most educated burn of them all. That's right, former FBI Director James Comey tweeted about the charges in the Russia investigation on Monday, Oct. 30 — or, at least, given the timing, that's what it seemed like.

A quick refresher: Comey was overseeing the FBI when the organization originally began its investigation into Russian meddling in the 2016 presidential election and the potential of collusion, back in the summer of 2016, before Trump was even elected. But President Trump fired Comey in May 2017, giving a number of reasons — including Comey's handling of the investigation into Hillary Clinton's use of a private email server, and the FBI's handling of the investigation into Russian election meddling. In the days immediately following Comey's firing, Deputy Attorney General Rod Rosenstein appointed Special Counsel Robert Mueller to pursue the investigation rather than allowing it to be cut off at the knees with Comey's firing.

And then the news broke on Oct. 30 that two Trump campaign associates — Rick Gates and former campaign chair Paul Manafort — were charged with crimes, including conspiracy against the United States, conspiracy to launder money, false statements, and more. Meanwhile, it came out on Monday that another Trump campaign staffer, George Papadopoulos, had pleaded guilty to lying to federal agents.

Basically, if there's anyone who's going to feel validated about the news, it's Comey. And he tweeted a subtly shady message that pretty much told everyone how he felt.

If you ask me, if your call-out includes anything that would have gotten you extra credit on your undergrad thesis, you kind of win.

Particularly when you consider the fact that there's no way that Trump, who notoriously does not like reading, would even understand this as a burn.

Comey confirmed last week that he's the man behind the Twitter handle @FormerBu, which uses the name of early-20th century theologian Reinhold Niebuhr, a well-respected political philosopher whose work "emphasized the persistent roots of evil in human life," and "stressed the egoism and the pride and hypocrisy of nations and classes," according to the Encyclopaedia Brittanica. And that thesis line wasn't even a throwaway joke — Comey literally wrote his thesis on Niebuhr's work.

And now, Comey's apparently using the account to call out the first round of charges in the most intellectual way possible, if the timing of the tweet is anything to go by. I mean, "man's inclination to injustice" doesn't exactly fit in a meme generator, but the meaning there is pretty clear.

This also serves as a reminder that Comey has called out Trump and his associates for shady dealings before.

Yes, he did it in a very cautious way, but I'm counting it.

After he was fired in May, Comey implied he believed his termination was due to pushing the Russia investigation. “I think the president, at his word, that I was fired because of the Russia investigation. Something about the way I was conducting it, the president felt created pressure on him that he wanted to relieve,” Comey told the Senate Intelligence Committee in June.

And he expressly highlighted an instance when the president allegedly asked him to drop an investigation into a close associate. In June, Comey testified to the Senate Intelligence Committee that the president had taken him aside on Valentine’s Day 2017 to essentially ask him to let National Security Adviser Michael Flynn off the hook for alleged connections to Russians. In a statement before his testimony, Comes recounted the conversation:

So, if I had to take a guess, Comey is probably somewhere out there right now, putting up his feet with a nice mug of tea and happily clicking "refresh" on his newsfeed as he bathes in the schadenfreude of seeing the Trump campaign's chickens come home to roost. It's what I'd be doing.