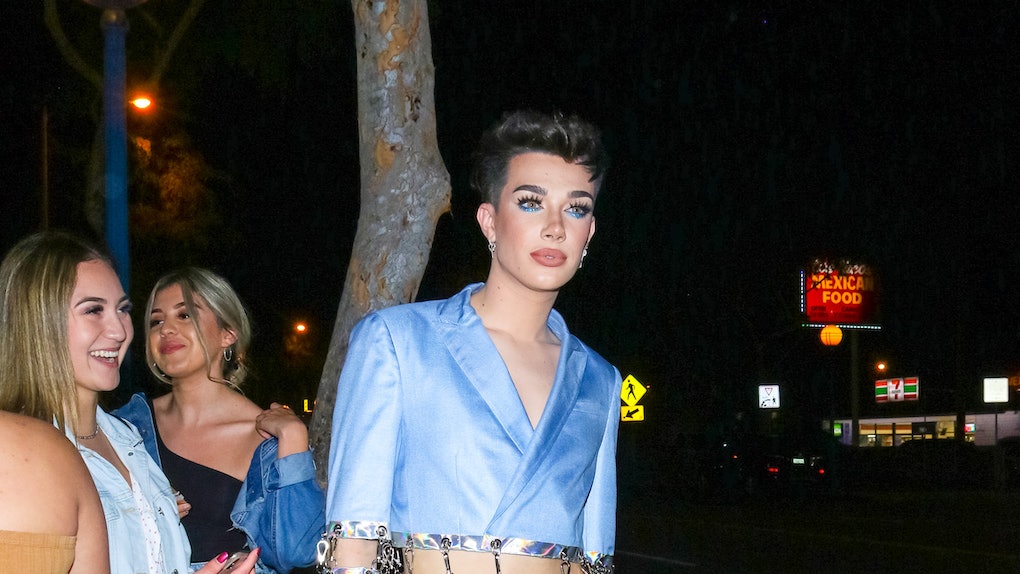 The world's most-followed TikToker, Charli D'Amelio, is in the midst of a scandal so huge that the world's top influencers are chiming in to comment on it: She's a picky eater. Gasp. For the Nov. 16 episode of Dinner With The D'Amelios, a personal chef whipped up a snail dish for the D'Amelio family and their special guest, beauty guru James Charles. The D'Amelio sisters reacted dramatically to the meal, with Dixie gagging and Charli requesting "dino nuggets" instead. The incident sparked major backlash online from commenters calling the sisters' behavior "entitled," but others disagree. Now, their special guest is chiming in. James Charles' tweets defending Charli D'Amelio are heated AF and are reminding people of his dramageddon from 2019.

For James Charles, a little scandal here and there is nothing new. I mean, how could one forget his major feud with Tati Westbrook that also implicated two of his former allies, Jeffree Star and Shane Dawson. Backlash is par for the course when you're a famous influencer, but even after developing such thick skin, Charles is not here for people coming at D'Amelio. He came to D'Amelio's defense on Nov. 19 after news broke that the scandal caused her to lose 1 million followers on TikTok.

"This Charli situation is NOT sitting right with me," he began his tweet addressing the drama. "... y'all expect her to know how to be a perfect role model? Death threats because she's a picky eater & made a joke about a milestone?"

Charles didn't hold back at all, and even implicated the adult influencers looking to involve themselves in the drama, like Trisha Paytas. "30+ year olds dragging someone half their age? Feels familiar," he concluded his statement, calling attention the similarities between D'Amelio's scandal and the pile-on of hate he received in 2019 after Tati Westbrook called him out for alleged bad behavior in her now-deleted "Bye Sister" video.

In the replies to Charles' tweet, fans linked him to a video of the personal chef from the episode, Aaron May, in which he responded to the backlash D'Amelio received for turning her nose up at his snail dish. "Fake news," he told a reporter for The Hollywood Fix. "Those girls are the greatest, I love them. It was all fun and games."

While May's comment puts to rest any concerned viewers who thought his feelings were hurt by the D'Amelio sisters' reactions, it has yet to stifle any incoming hate directed at them by their followers.

More like this
Is James Charles Single? Here's What To Know About The Sister Squad Star's Love Life
By Tara Martinez
Lil Huddy's "America's Sweetheart" Is About Charli D'Amelio, & He Admits It – EXCLUSIVE
By Brandy Robidoux
Lil Huddy & Charli D'Amelio Made Everyone Cry On The Set Of His "America's Sweetheart" Video
By Michele Mendez
Stay up to date