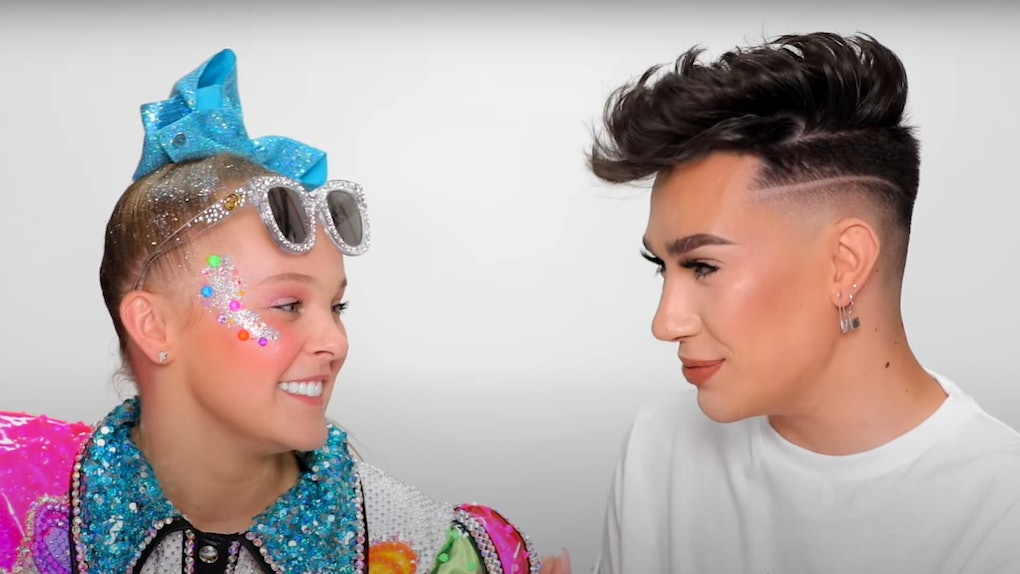 When you think of JoJo Siwa, you think big bows, a ton of glitter, and an over-the-top outfit. But on Friday, Aug. 21, James Charles got her into his makeup chair, and the results are mind-blowing. The new makeup video brought out a totally new side of Siwa, and the big reveal is lighting Twitter on fire. Check out James Charles' makeover of JoJo Siwa so you can see her transformation.

Charles' makeover transformation got rid of so many of Siwa's trademark style choices — no bow, no glitter on her eyelids or cheekbones, and no side ponytail — before adding some glam makeup. In the video, Siwa explained that the YouTube makeup transformation is both her "dream and her nightmare." Charles, who said he had wanted to do Siwa's makeup for some time, promised to do a look she'd be comfortable with.

"I have been asking JoJo to film a video with me for literally almost two years," the makeup YouTuber said. Siwa joked that she lets no one else do her hair or makeup, but was finally comfortable allowing him to do the video. In the 16-minute video, Charles talks to Siwa about her career, her image, and her recent TikTok videos, along with her time on Dance Moms. But of course, the most shocking moment came at the end of the video, when Charles revealed Siwa's glam new look. With so many of her colorful signature accents gone, Siwa stunned fans in a way nobody was expecting.

Twitter basically couldn't grasp that it was Siwa because of how different and grown-up she looked.

A couple of users compared her makeover look to NikkieTutorials, with Nikkie herself chiming in to say how familiar Siwa's new look was.

Some people are rooting for Siwa to change her target audience to a more mature group because of how gorgeous she looked:

Other stans are pointing out that Siwa is beautiful no matter what:

One Twitter user just wants Siwa and Charles to hang out all the time:

While Siwa was experiencing both dread and excitement for the makeover, Twitter is clearly thrilled with the look. You can watch the full makeover video here.