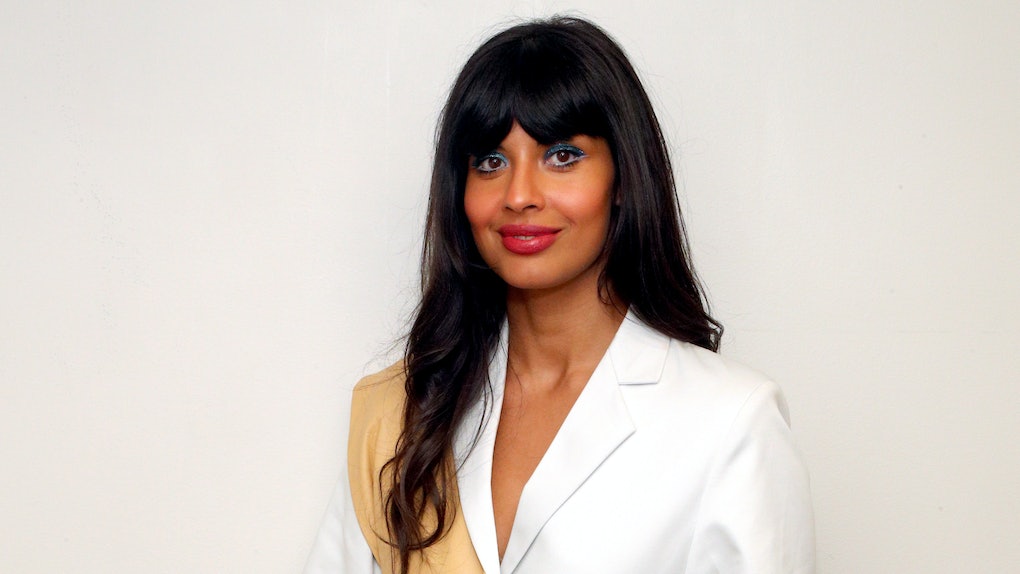 Jameela Jamil is basically a target for haters. As a body-image activist and a self-proclaimed "feminist-in-progress," the actor gets more than her fair share of naysayers, particularly on social media, where negativity runs rampant. But despite this — or maybe because of all the practice she's gotten — Jameela Jamil knows how to expertly handle internet trolls, and she does so with a method that's equal parts zen and badass: She just doesn't care if people like her.

"My advice with internet trolls is to just understand that a lot of those people aren’t bad people; they’re just sad people projecting their bad day onto you, so don’t take it personally," she tells Elite Daily backstage at the Glamour Women of the Year Summit. "We don’t have a responsibility to be liked by everyone. Just like we don’t like everyone, everyone doesn't have to like us, so just move on and move up."

It may seem counterintuitive for someone like Jamil, whose career is so public, to not actually put much stock in the public's opinion of her. But as she puts it, she's "not interested in the popularity contest" of being famous. "I’ve chosen to surround myself with people that I respect and that I admire. And really, as long as those people respect and admire me, that’s all I need," she says. "I don’t need the love of the world or respect of the world; I just need to get sh*t done."

As Jamil's time playing Tahani Al-Jamil on NBC's The Good Place comes to an end (the sitcom's series finale airs Jan. 30), she's ramping up the activism side of her career even more. Her Instagram account @I_Weigh, which encourages people to stop measuring their worth based on the number on a scale, has grown into a full-blown movement. Along with advocating for body neutrality, Jamil is outspoken through I Weigh about the lack of regulations around promoting and selling weight-loss products, and she has gotten a lot of attention for publicly calling out stars like the Kardashians for promoting such products. The movement is even credited as a factor in Instagram's decision to impose an age restriction for the promotion of content related to diet products and cosmetic-surgeries.

As for the particular brand of internet troll who doesn't count this work on social media as "real activism," Jamil has a special message: "Look, I understand the concept of 'slacktivism' and that liking and retweeting something isn’t actually going to make that much change, but I also think that social media is how Me Too and Time's Up really came about, and they are the most successful movements we’ve ever had of women’s liberations when it comes to sexual harassment and assault," she says. "So [members of] the older generation [who might not take social media activism seriously] should shut up, and take note of what we’re achieving."

Jamil's anti-people-pleasing mindset is definitely worth keeping in mind the next time a crappy Instagram comment gets you down, and her drive to make the world a better place is inspirational AF. Honestly, for someone who doesn't give a second thought to being liked, she's pretty damn likable anyway.