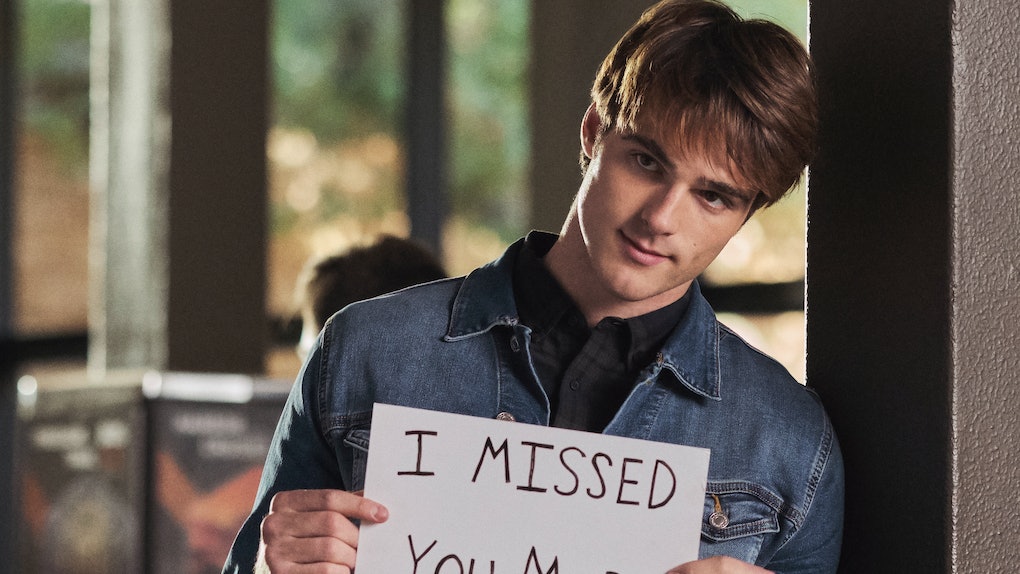 Jacob Elordi Said He Wasn't "Miserable" In 'The Kissing Booth 2,' So That's That

While it's basically a scientific fact Jacob Elordi's smoldering gaze can make any situation better, fans have recently expressed concern over the actor's (incredibly handsome) face. When a teaser video for The Kissing Booth 2 came out in October 2019, viewers thought the hunky Australian looked less than pleased to be reprising his role in the hit Netflix film. In a recent interview, however, Jacob Elordi said he wasn't "miserable" in The Kissing Booth 2 like everyone thought. It turns out, the reason for his long face is actually super relatable.

When asked for his response to the Twitter outcry over his "miserable" expression during an interview with Access Hollywood on July 24, the actor cleared up any speculation. “I have a resting miserable face,” Elordi said. “You know what it is? It’s because I’m usually thinking a lot, about like, an insane amount about something ridiculous." Basically, he's lowkey spacing out while everyone thinks he's upset.

Additionally, Elordi said he was exhausted returning to the set of The Kissing Booth 2 immediately after filming Season 1 of Euphoria (on which he plays the emotionally repressed jock Nate). "Literally, I finished Euphoria after like, two night shoots, and I got on a plane and flew to Africa ... I was bloody tired, but I wasn't miserable," he said, doubling down on the sentiment and adding: "Quote that, please. I had a blast."

Plus, while the actor's facial expressions are due to his brain and body working overtime, Elordi pointed out there's actually a good reason for Noah Flynn to have a grumpy smirk anyway. Basically? The character is pretty temperamental. "He's like, a moody guy. He's not running around doing wild sh*t all the time," Elordi said.

This is true — Noah's not exactly known to be a smiley, happy-go-lucky kind of dude. Whether that will change should Elle decide to join him at Harvard for college, fans will have to wait for the third film's release in 2021 to find out. Here's to hoping Noah (and Elordi) get to relax a bit in the The Kissing Booth 3.

The Kissing Booth 2 is on Netflix now.

More like this
'The Kissing Booth 3': Release Date, Trailer, Cast, Plot, & More Details
By Sarah Halle Corey and Lexi Williams
'He's All That': Premiere Date, Cast, Trailer, Filming News, & More
By Dylan Kickham
An 'After' Prequel About Hardin & A Sequel About His Kids Are In The Works
By Abby Monteil
Stay up to date