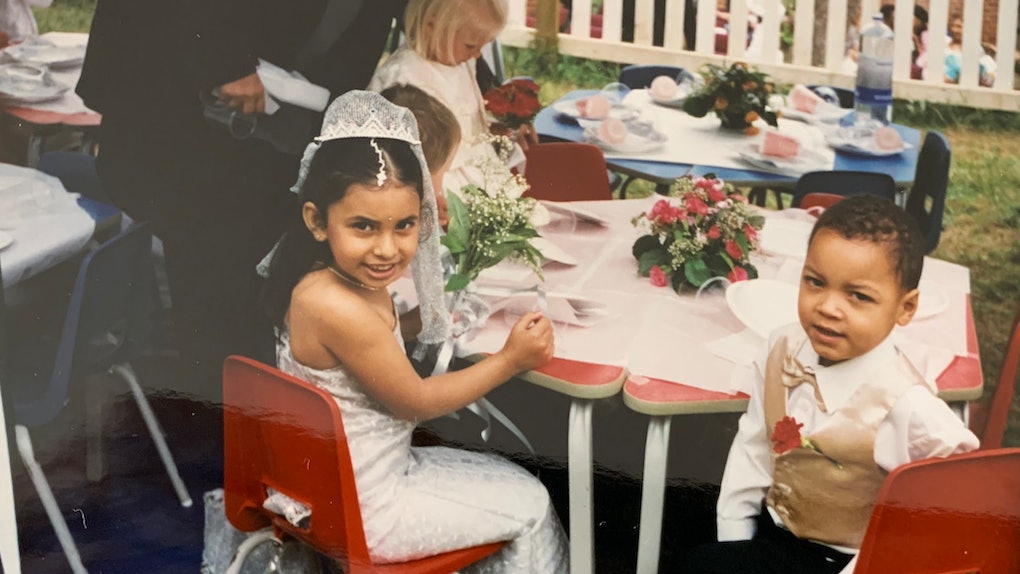 When it seems like the world's on fire, leave it to the internet to toss over a few crumbs of joy. 16 years ago, Jack Callow and Rena Jutla had a preschool “wedding” to commemorate their close friendship. On June 6, Callow tweeted photos of the fake wedding after rediscovering them while visiting his grandfather. "So I got married in nursery looool haven’t seen my wife in 16 years, no wonder I have commitment issues," he wrote. Callow's "wife" saw the viral post and replied with a childhood photo of herself dressed up from the day, captioned, "Started when we were younger you were mineeee." I'm not crying, you're crying.

Callow, now a 20-year-old law student, told Buzzfeed, "I remember that I proposed to her behind a tree, and the nursery kind of hopped on the bandwagon. Me and Rena were very close, and the nursery wanted to do something fun before everybody moved on to reception [Editor's note: Reception is the first year of primary school in the UK]. So they put on a mock wedding for us, like a party for all the kids but based around us getting fake married. It was a great experience, and I think the parents enjoyed it as much as the kids."

Twitter users loved Callow's post so much, they began to circulate it in hopes it would reach Jutla.

Eventually, Jutla, now 21 years old, saw the tweet and told Buzzfeed she laughed because she'd never seen the photos before. "I don't know how it got taken so seriously, but I'm glad it did," she said, reminiscing about the hula-hoop archway the teachers decorated for her to walk through.

Even though the two are both students from Buckinghamshire in the UK, don't hold your breath for a reunion — Callow told Buzzfeed he's already in a relationship. "[My girlfriend] wasn't very happy the world wanted me dating someone else, but she finds it funny now," he said. Nevertheless, they were both nostalgic and grateful for their trip down memory lane. "It kind of demonstrated the power of the internet and things going viral as a way to get people's attention and spread information," Callow said. "It was quite interesting."

Here's hoping the two are able to reconnect IRL soon, even if it is just as friends!