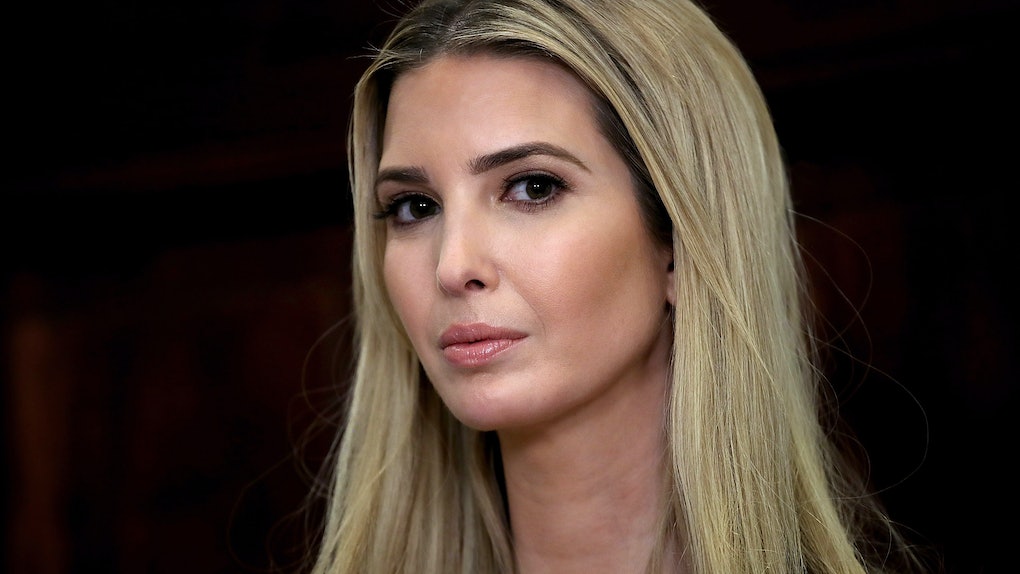 As everyone celebrates the unofficial start of summer, people are also taking time to remember the reason for this three-day holiday weekend. Memorial Day is, of course, a day of observance to honor U.S. soldiers who have died in military service. In the age of social media, it's not uncommon to see your feeds filled with touching posts in remembrance of those who have died in service to the United States. Ivanka Trump's Memorial Day tribute expressed her gratitude for those who have died while serving in the U.S. Armed Forces, and it was a welcome shift after a contentious photo posted the day prior.

On Monday, May 28, Trump posted a series of three photos on her Instagram page to remember fallen soldiers on Memorial Day. One of the photos features American flags flying in front of soldiers' headstones, and the caption reads, "As we remember our fallen servicemen and women, our hearts are filled with gratitude for their sacrifice and awe of their courage. #MemorialDay." Trump also shared the post in remembrance of fallen soldiers on her Twitter page.

The other photos in Trump's Instagram tribute included a memorial wreath in front of the Tomb of the Unknown Soldier at Arlington National Cemetery, and a photo of Trump and some of her family members (minus President Trump) holding their right hands over their hearts. All in all, it appears to be a well-deserved tribute to fallen soldiers.

As both the daughter of and special advisor to President Donald Trump, pretty much every move she makes is under scrutiny. Her Monday morning posts in honor of those servicemen and women who gave their lives in the name of this country were likely received far better by the public than her Sunday morning posts.

It was her Sunday, May 27 social media posts that ruffled quite a few feathers. Trump posted a photo of herself with her youngest son Theodore Kushner. She opted for a simple caption of a heart emoji that made it read, "My heart!" OK, that seems innocent enough, right? Well, it actually turned out to be more heartless than she might have intended.

Well, the big problem with a member of the Trump administration posting a photo like this is that the news was released last month by the Department of Health and Human Services’ Office of Refugee Resettlement (ORR) that they were "unable to determine with certainty the whereabouts" of nearly 1,500 immigrant children, per Mother Jones. It was reported on April 26 by The New York Times, that Steven Wagner, an ORR official, testified before the Senate that ORR lost track of 1,475 children between October and December 2017.

Many people took issue with Trump casting aside the feelings of the parents of these reported lost immigrant children, and the hashtag #WhereAreTheChildren was used to urge the government to find the missing kids. Critics called out Trump for posting a photo with her child in her arms amid the news of the staggering number of missing migrant children who were taken into government custody at the border, placed with sponsor families, and then "lost track of" due to poor oversight.

Furthermore, the Trump administration recently expanded a "zero tolerance" policy on illegal immigration that would immediately separate parents and children entering illegally at the border. Attorney General Jeff Sessions explained the reasoning behind the policy in a speech on May 7 to law enforcement officials in Arizona and California. Sessions said,

Many people thought Trump's Sunday morning photo was untimely and a cruel reminder to parents of lost children of exactly what they are missing in their lives: their children.

Trump didn't appear to address the criticism, but she made sure to post on Memorial Day in remembrance of soldiers who have died protecting the United States. While these posts didn't remove criticism of her "My heart!" post, it probably will draw far less criticism, seeing as how respect for the military is a far less divisive topic. In fact, a June 2017 Gallup poll revealed that 72 percent of Americans had confidence in the military, while only 32 percent had confidence in the presidency, according to The Washington Post.

Since the numbers are on her side, and Ivanka Trump's Memorial Day posts both appear to be sincere and respectful tributes to military personnel killed in service to the United States, these two posts should drive less controversy.