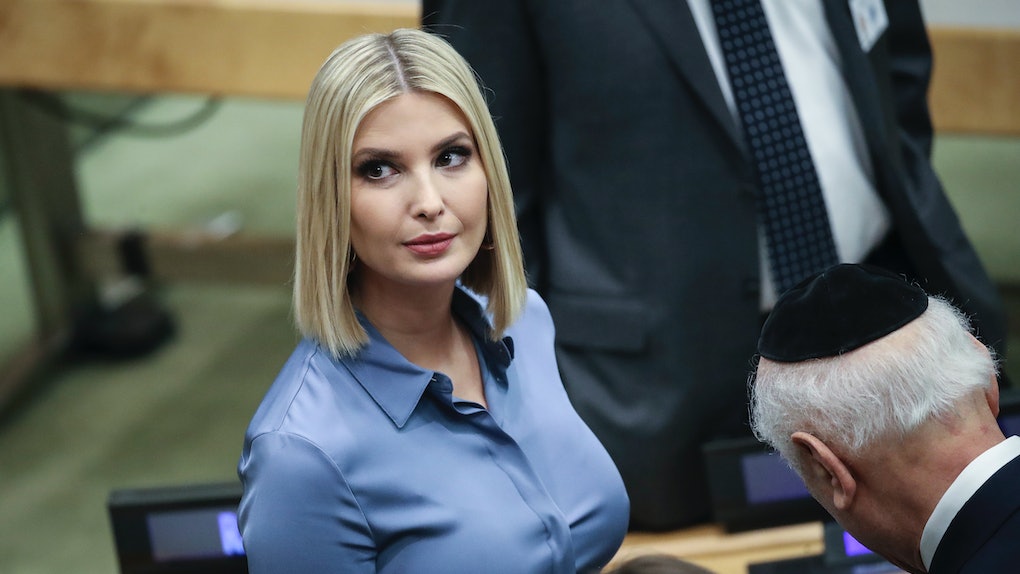 Safe to say, this has been quite a week for the Trump administration, and it's only Wednesday. On Tuesday, Sept. 24, House Speaker Nancy Pelosi made an announcement that could seriously impact President Donald Trump, but Ivanka Trump's Instagram after the House's impeachment inquiry announcement doesn't address the drama. Clearly, she's standing by the president.

Since House Speaker Nancy Pelosi announced on Sept. 24 that she plans to open an official impeachment inquiry into President Donald Trump, it's been at the top of everyone's minds. President Trump quickly responded to Pelosi's announcement by tweeting "PRESIDENTIAL HARASSMENT," while the White House characterized the inquiry as Democrats' attempts to "weaponize politics." But it appears that White House senior staffer and presidential daughter Ivanka Trump is opting for a more subtle approach. On Wednesday, Sept. 25, Trump shared an image of her father, President Trump, raising his fist victoriously on her Instagram story with a caption that simply read "Thank you, Mr. President!"

It's unclear exactly what Trump is thanking the president for, but talk about interesting timing. Even though House Democrats have been discussing impeachment proceedings towards President Trump over recent months, Pelosi's Sept. 24 announcement marks the first official step to actually make some Democrats' dreams a reality. While an impeachment inquiry doesn't guarantee that the president will be impeached, it's still probably a stressful experience for President Trump. So, perhaps his daughter's Instagram post lifted his spirits a little bit.

Since joining the White House as a senior staffer, Trump has remained pretty under the radar when it comes to addressing administration controversies. As of Wednesday, Sept. 25, she has yet to speak on the phone call between President Trump and Ukrainian President Volodymyr Zelensky which prompted the inquiry, in which President Trump suggested Zelensky investigate former vice president and potential 2020 presidential opponent, Joe Biden. The White House released a non-verbatim transcript of the call on Sept. 25 confirming that the two discussed Biden, although the president has denied wrongdoing. In a statement to Elite Daily about the inquiry, White House Press Secretary Stephanie Grisham said,

The Democrats continue to weaponize politics when they should be working on behalf of their constituents, which is nothing new. President Trump is working hard on behalf of our country here in New York City while they continue to scream the word impeachment. Nothing new here.

Judging by Trump's latest Instagram posts, she's been busy with other matters — specifically her pet project, the Women’s Global Development and Prosperity Initiative (W-GDP). The initiative was established by President Trump in February 2019, with the mission to produce "a multiplier effect that spurs economic growth and contributes to global peace and stability" for female entrepreneurs, according to the White House website. Despite President Trump launching the initiative, senior staffer Trump has done most of the heavy lifting, and nearly all the public-facing work. On Tuesday, Sept. 24, Trump shared an Instagram video of President Trump speaking United Nations General Assembly about the W-GDP. While speaking at the U.N., Trump said,

Guided by these principles, my administration launched the women's global development and prosperity initiatives. The WGDP is the first ever government-wide approach to women's economic empowerment working to ensure that women, all over the planet, have the legal right to own and inherit property, work in the same industries as men, travel freely and access credit and institutions.

From impeachment inquiries to controversial phone calls, the Trump administration has a lot to deal with at the moment. However, leave it to Trump to focus on issues that she might find more important at the moment. Only time will tell if the impeachment process moves forward, but the president can at least rest assured that his daughter has his back.