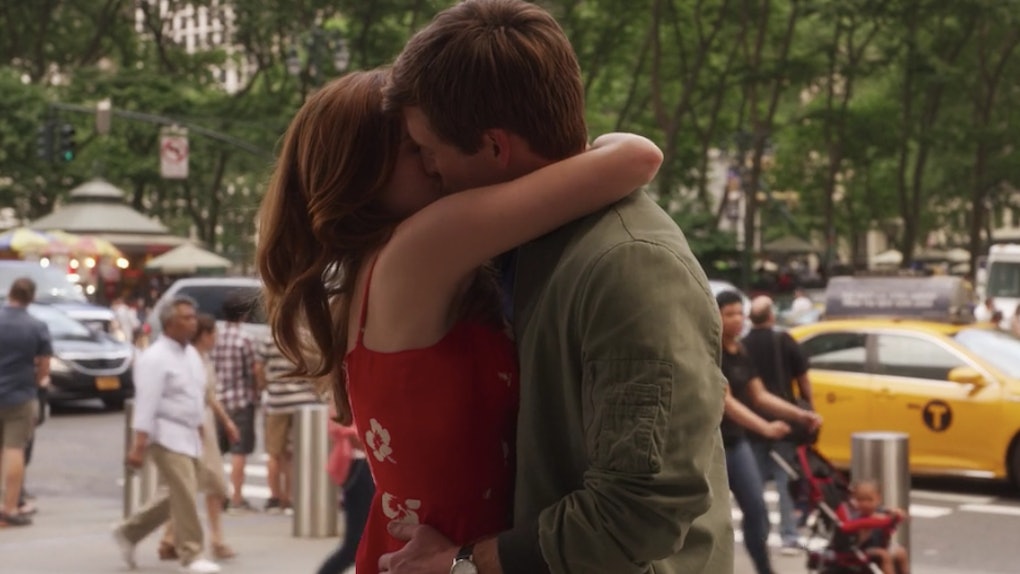 Today is International Kissing Day, which is an annual, worldwide celebration of all kinds of kisses. While kisses can range from a friendly peck on the cheek to a full-fledged, passionate make-out sesh, when it comes down to the most memorable kisses, the more romantic the better. In honor of International Kissing Day 2018, I'm rounding up my favorite on-screen lip-locks from this year's television shows and movies. From that first, highly anticipated smooch between a will-they-won't-they couple, to a celebratory proposal kiss shared by long-time TV favorites, the below list celebrates this special day by counting down the best on-screen kisses of 2018 (so far).

A few of these selections might even rival some of the best on-screen kisses of all time. These actors have chemistry so intense that I can't help but wonder if sparks are flying off-screen as well, à la Rachel McAdams and Ryan Gosling in The Notebook. Some major strides have been made in the last decade, thank goodness. With two same-sex couples on this list, TV and movie networks are finally starting to catch on to the fact that viewers want to see LGBTQ+ people represented in the media. So, without further ado, here are the nine best TV and movie kisses of 2018 so far. Warning: spoilers ahead.

When Cheryl and Toni finally kissed on season two of Riverdale, stans of the pairing went wild. The scene in episode 17 pretty much confirmed their official couple status. TBH, I think these two could possibly rival Riverdale favorites like Bughead and Varchie down the road. Let's just hope their storyline is given the attention it deserves in season three.

This movie was so good, I watched it twice in theaters. And with the price of movie tickets in Manhattan, that's saying a lot. The final kiss between Simon and Blue (who is revealed to be Bram) was everything viewers had been waiting for, and so much more. Both times I saw the film, audience members clapped and cheered during the climactic scene. And did I mention this kiss won the title of Best Kiss at this year's MTV Movie & TV Awards? So well deserved.

3. Eleanor And Chidi, 'The Good Place'

If you're not watching The Good Place, you're truly missing out. Also, sorry for the spoiler. But you should still binge-watch this show ASAP. Eleanor and Chidi's kiss was a major highlight of the quirky, feel-good NBC series' second season finale. This unlikely pairing might be adorably awkward, but their first kiss is perfect.

Black Panther's T'Challa and Nakia are my new favorite Marvel couple. From the first time they interact in the film, you pretty much know this kiss is coming, but it definitely does not disappoint. Love, love, love these two.

Nick and Jess are one of the best couples on TV, so the fact that they finally get engaged in the final season is so satisfying. I will truly miss the show, but at least viewers like me got an ending that felt complete.

Ryan Reynolds and Blake Lively are the perfect off-screen couple, but Reynolds' character of Deadpool, AKA Wade Wilson, has also met his ideal match. Vanessa Carlysle's "Kiss me like you miss me" lines in Deadpool 2 are heartbreakingly perfect.

Amy and Jonah finally broke the sexual tension between them by going all the way in Superstore's season three finale. While their future together isn't set in stone, season four will definitely be interesting for these two.

The Netflix original movie Set It Up is a must watch. The chemistry between Zoey Deutch and Glen Powell will make you swoon, and their first kiss, set against the backdrop of New York City, is every assistant's dream.

Fifty Shades Freed, the final installation in the Fifty Shades of Grey movie franchise, begins with Ana and Christian's nuptials. While viewers have seen this couple kiss (and more) many times throughout the first two movies, watching Christian kiss the bride after saying "I do" was something fans had been waiting on for years.

Celebrate International Kissing Day 2018 by watching one of these movies or TV shows, and don't forget to kiss your own special someone today.