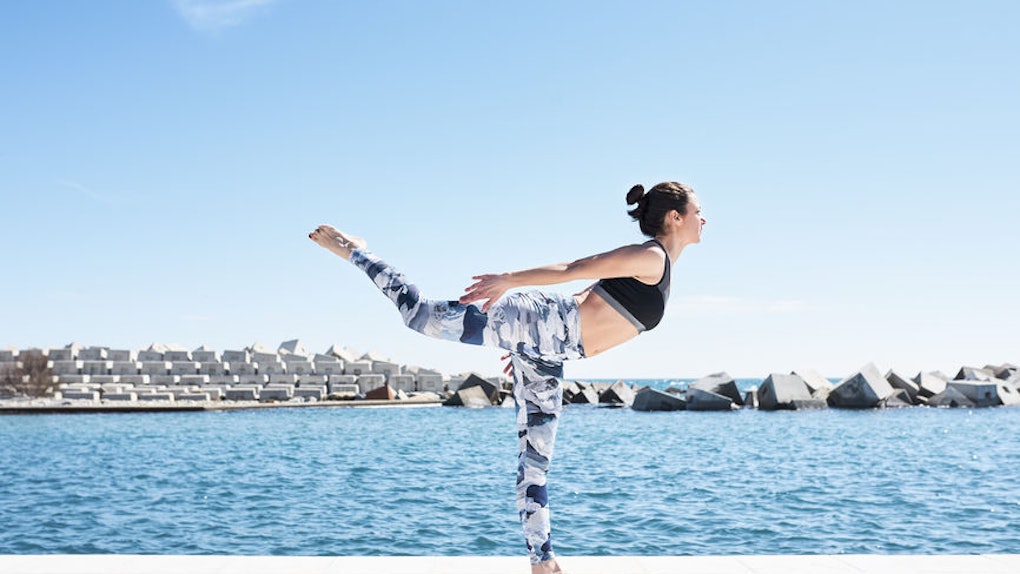 Is Yoga Good For An Upset Stomach? Yogis Reveal The Best Poses To Try When You're In Pain

Have you ever had a stomach ache that was so bad it almost made you panic? Same, girl. Whether it's nausea or gas pains that refuse to quit, it can feel downright unbearable when you're dealing with stomach cramps of any kind. And while your first lines of defense should definitely include a check-up with your doctor and/or medications like Pepto-Bismol, practicing yoga can also be good for an upset stomach, particularly in those moments when it feels like you're just lying there in agony, waiting for the discomfort to pass.

According to Heather Peterson, chief yoga officer at CorePower Yoga, yoga can be a wonderful, movement-based part of a multifaceted approach to maintaining gut health and treating your stomach issues. In the long-term, Peterson tells Elite Daily over email, this approach can also include organic, local, and seasonal foods to promote the production of healthy bacteria in your stomach, as well as herbs and supplements to cleanse and rebuild the gut. Specifically, think foods like broccoli, asparagus, bananas, flaxseed, apples, garlic, and basically anything with fiber in it.

But listen, in those moments when you find yourself literally doubled over in pain, I'm going to guess you probably don't want to be thinking about gut bacteria. So when those moments strike, here are a few expert-recommended yoga poses that'll bring you some relief.

The name says it all, friends. When your stomach feels like it's ready to pop thanks to those awful, trapped gas bubbles, this pose is going to be your savior. Lie on your back, says Peterson, and be sure to keep your spine flush to the ground. Bring your knees to your chest, and simply breathe. "A gentle compression of the abdomen will facilitate elimination, and this is done in almost all yoga asana classes," Peterson tells Elite Daily.

In other words, this pose is probably going to make you fart, so go ahead and let 'em rip, girl.

Hillary Wright, yoga teacher and director of continuing education at Y7 Studio, offers a simple suggestion for an upset stomach: "Begin kneeling and bring your sit bones down onto your heels. Sit here for at least 10 to 15 breaths to allow your digestion to regulate," she tells Elite Daily over email.

I know this one might seem too good to be true, but according to the International Foundation for Functional Gastrointestinal Disorders, practicing deep, diaphragm-based breathing really can be an easy and effective way to relieve stomach pain. So why not give it a shot?

According to Wright, this pose works in tandem with your body's natural digestion process. She describes it as a "gentle massage" for your internal organs.

Lying on your back and placing your legs up against a wall, says Peterson, is a great way to stimulate a downward flow of energy in your body, which she says will help relieve some of your pain. She adds that you can also put a folded towel or blanket underneath your lower back in this pose, and then let your hips fall to the floor. "This reduces stress and calms the nervous system," she tells Elite Daily.

Personally, this is my favorite yoga pose of all, and according to yoga teacher and wellness professional Sherrell Moore-Tucker, it's a great way to relax and unwind on those days when your stomach just isn't having it.

"When you’re at rest in corpse pose, the nervous system may move from sympathetic to parasympathetic mode, and the 'rest and digest' response is activated," she tells Elite Daily over email. So lie down, relax, and allow your pain to melt away.