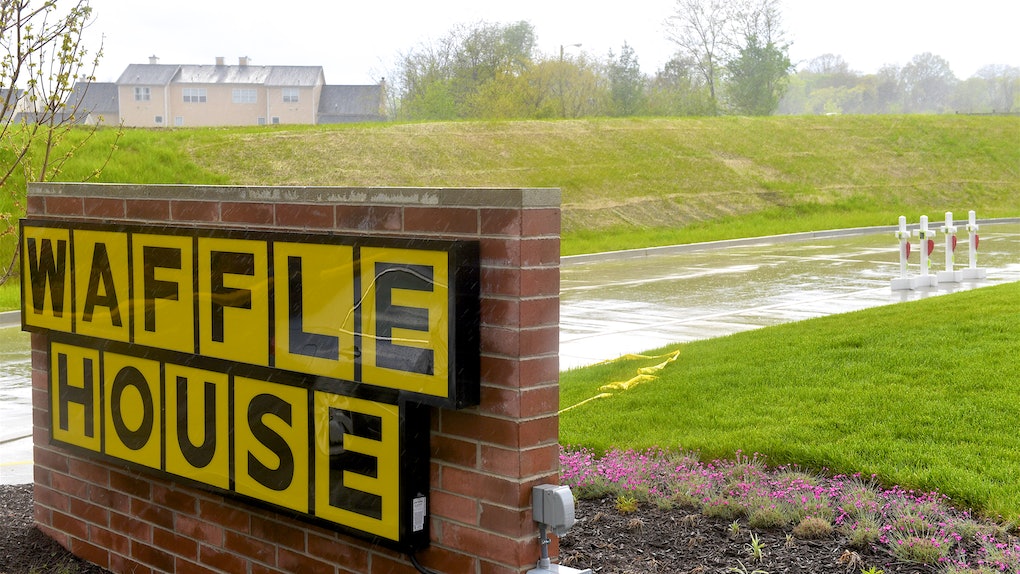 Is Waffle House Open On Christmas Day? Get Ready To Feast

Let's face it, sometimes holiday dishes like turkey, stuffing, and eggnog can get a little repetitive. For me, sometimes (all the time) I just want to enjoy a hearty breakfast of waffles, eggs, and hash browns, and I doubt I'm the only one. So, if you're like me and want to ship the traditional Christmas meals this year for some good ole' fashion breakfast delights, you're probably asking: is Waffle House open on Christmas Day? Lucky for us, Waffle House is always reliable.

According to food website Chowhound, Waffle House will be open on Christmas Day and operating on normal business hours. The chain is known for its 24-hour, 365-a-year service (though it never hurts to check your local restaurant's hours just in case). Honestly, it's not that surprising. If this national breakfast chain is known for anything, it's that it never closes its doors for anything. So, in case you're craving some syrupy breads and smothered hash browns on Christmas Day, you're in luck. I don't know about y'all, but waking up on Dec. 25 is already a magical experience. So, the possibility that I could wake up, enjoy Santa's arrival, and then head to Waffle House to score some cheap and delicious breakfast at any point of the day is well... dare I say... a Christmas miracle?

Do you hear that? That's my stomach already rumbling.

Truth be told, I wish I had half the resilience of Waffle House. The breakfast restaurant might be known for its around-the-clock service, but it turns out even severe circumstances don't always mean that the restaurant will close down. Just take Wednesday, Oct. 10 as an example, when Category 4 Hurricane Michael hit the Florida Panhandle and devastated a number of homes in that area. Sure, storms in Florida aren't necessarily an uncommon occurrence, but prior to Hurricane Michael's arrival, the anticipation of the storm was so extreme that a Waffle House spokesperson told USA Today that the chain was forced to close 30 of its restaurants, 22 in Florida and 8 in Georgia. Truth be told, that decision was probably for the best. However, once Hurricane Michael moved away from Florida, the spokesperson shared that Waffle House planned to reopen its doors the day after on Oct. 11.

So basically, not even a semi-severe hurricane can make Waffle House close its doors for that long. After all, the breakfast chain is known for a lot more than 24-hour service and delicious food: it's also used by the Federal Emergency Management Agency (FEMA) for a very important reason. Believe it or not, a "Waffle House Index" is a very real thing, and it's a measuring tool used by FEMA to predict how well an area will recover from a storm, depending on the number of Waffle Houses that are closed, open, or offering a limited menu. Why is that important? Well, the chain stays open to feed natural disaster first responders, which is why the restaurant's menu is a very telling tool.

Seeing as there's no plans for a hurricane this holiday season, it looks like we'll be able to enjoy a festive breakfast feast without any worries. Get your forks and knives ready, ya filthy animals.