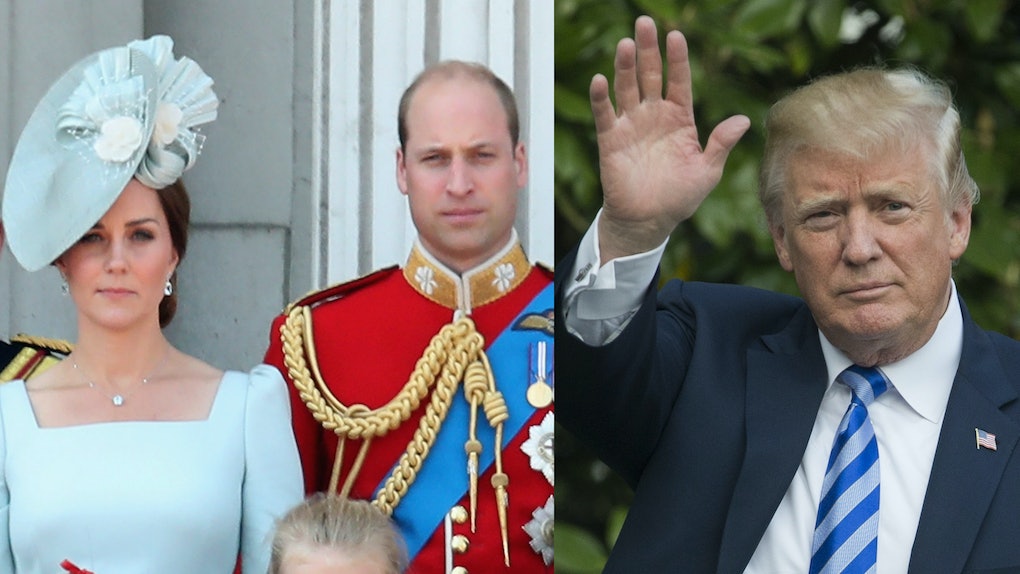 On Friday, July 13, President Donald Trump will be meeting with Queen Elizabeth at Windsor Castle in the United Kingdom. This highly-anticipated meeting comes as part of Trump's first official visit to the British nation as president. But while it is confirmed that the former reality television host is scheduled to meet with the queen, the question of if Trump will meet Prince William and Kate Middleton is a little more up in the air.

A statement obtained by Politico Playbook from Kensington Palace details Trump's visit with Queen Elizabeth — which first lady Melania Trump will be joining him for — and gives a decent outline of what to expect. So far, that outline does not include meeting with other members of the royal family, such as Princes William and Harry or their respective spouses. Elite Daily has reached out to the White House and Kensington Palace to get confirmation on if the young royals would have a chance to meet the president, but did not hear back at time of publication.

"Her Majesty will welcome the President and the First Lady Melania Trump at the dais in the Quadrangle of the Castle," the palace statement reads about the visit. Following that welcome, the Guard of Honour, which is made up of Coldstream Guards (members of the British Army), "will give a Royal Salute," followed by the playing of the U.S. national anthem. After the Guard of Honour does their salute and the anthem is played, Trump will "inspect" them before watching a military march. Following all of that pomp, President Trump "will then join the Queen for tea with the First Lady."

It's also feasibly not a trek they'd be quite so willing to make for this particular president. In his time as a public figure — before becoming president — Donald Trump made some pretty awful comments about Kate Middleton. Oh, and don't worry, the comments are still preserved on his Twitter feed, because of course they are. Back in 2012, an invasive photographer got pictures of Kate sunbathing topless in France. (In 2017, a judge ordered Closer, a French magazine, to pay William and Kate 100,000 euros in damages for publishing the photos.) Rather than condemn the invasive photographer, Trump chose to blame Kate for believing that she was in a private place.

"Kate Middleton is great--but she shouldn't be sunbathing in the nude--only herself to blame," he tweeted.

Perhaps not the best foot on which to start off a diplomatic relationship.

But the other reason I wouldn't expect President Trump to be meeting Prince William and Kate is precedent. When President Barack Obama and first lady Michelle Obama met Queen Elizabeth in 2009, they did not meet with the princes. Although Barack, Michelle, and the princes have hung out (with some notable pictures to prove it), that didn't happen until well after the Obamas' first meeting with the queen.

So it looks like the world is just going to have to wait to see a meeting between the Trumps and Prince William and Kate. Look out for more updates — specifically those involving visits to Kensington — if you want hints of if it'll ever happen.