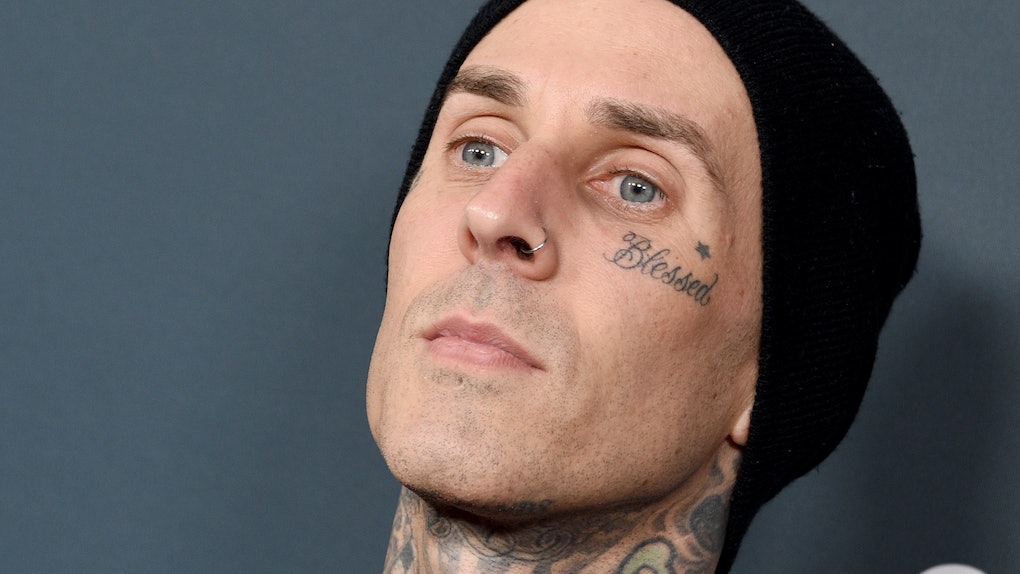 Is Travis Barker's New Tattoo A Tribute To Kourtney Kardashian? Here's Why Fans Think So

Blink-182's drummer has got some new ink. He recently tattooed the words "You're so cool!" on his upper thigh, and fans immediately jumped to the conclusion that Travis Barker's new tattoo is for Kourtney Kardashian, mostly because it kinda looks like his GF's handwriting. On March 26, Barker shared some pics from the process on Instagram, one of which included a handwritten note on a napkin from the Beverly Ambassador Hotel that read, "You're so cool!" After seeing that, fans compared the handwriting to other love notes penned by Kardashian — but apparently, those fans aren't familiar with the 1993 Quentin Tarantino film True Romance.

During one scene in the movie, Alabama (played by Patricia Arquette) slides Clarence (played by Christian Slater) a napkin reading "You're so cool!" while they sit in the Beverly Ambassador Hotel, all while "You're So Cool" by Hans Zimmer plays in the background. So sorry, friends, but the tattoo is more than likely a nod to the movie, not to his new boo. And if you're still not convinced, Barker even captioned his March 26 post, "I like you, Clarence. Always have. Always will," which is, of course, a line from True Romance. And he included a still from the movie in his IG carousel, so there's that.

However, Kardashian seemingly expressed her approval when she commented, "You're So Cool!" on the post.

It's understandable why fans assumed the napkin note was written by Kardashian, however. Soon after Barker and Kardashian became Instagram official on Feb. 16, Barker took to his IG Stories to share a... unique note from Kardashian, which read, "To lots of fun adventures, may we destroy each other completely. Love, Kourtney." Then, on March 22, Barker shared another message from Kardashian, which simply read, "I love you." I definitely don't work for the FBI, but upon close observation, Kardashian's handwriting does look very similar to Patricia Arquette's (or, at least, Arquette's character in True Romance).

On Barker's Instagram post where he debuted his fresh ink, one fan commented, "Kourtney wrote that, huh," and another said, "It's tattoo official." And though that isn't the case, the tattoo could still be partially inspired by Kardashian. On Jan. 6, Kardashian shared a still from True Romance on Instagram, which she captioned with a red heart emoji, and Barker slid into her comments section to write, "You're so cool!" Apparently, they're both fans of the flick.

They may not be tattoo official just yet, but it definitely seems like Barker and Kardashian have a ~true romance~ regardless.