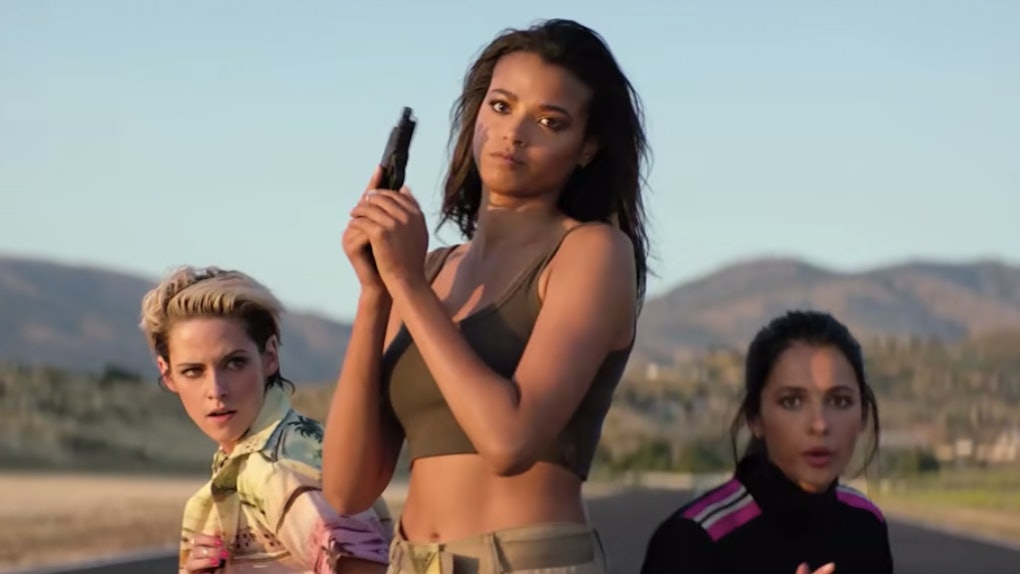 Is There A ‘Charlie’s Angels’ Post-Credit Scene? It's Full Of Surprises

So, you've seen the 2019 reboot of the classic Charlie's Angels movie. You're hyped from all the girl power and the sheer fabulosity of Kristen Stewart's wig collection. You already want more — but how will you get it? Stick around in your seat and you'll see, because yes, Charlie's Angels has multiple mid-credit scenes, and they are so freaking epic.

Warning: Spoilers for Charlies Angels (2019) follow. The movie centers on mega-smart scientist Elena Houghlin (Naomi Scott), who unexpectedly gets caught up with two Angels, Sabina Wilson (Stewart) and Jane Kano (Ella Balinska), as well as a Bosley (Elizabeth Banks), in order to stop bad people from getting their hands on a dangerous piece of technology. A lot of the film's funniest moments come from Elena learning about the top-secret, mega-cool world that these agents are part of, and along the way, Elena proves herself to be a very powerful asset to Charlie's Angels. At the end of the film, she's asked if she wants to go to through training to join Sabina and Jane as a certified Angel, and of course her answer is yes.

Though the main film ends before Elena starts her training, as soon as the credits start rolling, viewers are able to get an idea of all the work she has to go through to earn her wings.

What ensues is basically a montage of different training activities Elena endures. I don't want to give too much away, but as the Angel-in-training learns about engaging in physical combat, diffusing bombs, and landing airplanes, she's accompanied by some pretty familiar faces. Let's just say Lili Reinhart, Hailee Steinfeld, and Chloe Kim (among others) also want to work for Charlie.

After the training scenes, the credits roll as they would in any other movie, but don't leave just yet! A final mid-credit scene will eventually pop up, and if you enjoyed the friendship that blossomed among Elena, Sabina, and Jane during the movie, you won't want to miss what happens as the newest Angel earns her wings.

Some fans might wonder if the mid-credit scenes of Elena joining Charlie's squad means there's a for this iteration of the franchise. If you'll recall, the first film version of Charlie's Angels (which was inspired by a TV series of the same name in the 1970s) starring Drew Barrymore, Cameron Diaz, and Lucy Liu, spawned a sequel in 2003. So could the same thing happen now?