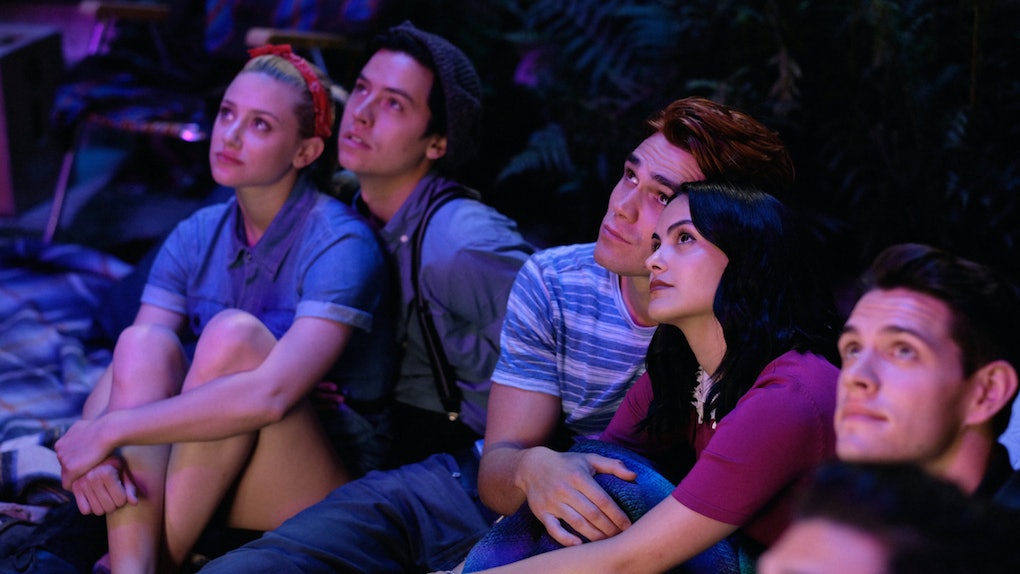 Is There A 2019 ‘Riverdale’ Thanksgiving Episode? Fans Are Ready For It

Thanksgiving is all about stuffing yourself with food and lounging around with your family, but something tells me the Riverdale version of the holiday would be a whole lot less laid back. Luckily, viewers are about to find out just what Turkey Day looks like in a serial killer-filled small town, because the CW series is gearing up to celebrate in its own unique way. The show has not had a Thanksgiving episode before, but for Season 4, there will be a 2019 Riverdale Thanksgiving episode for fans to sink their teeth into.

Showrunner Roberto Aguirre-Sacasa confirmed on Twitter that the Nov. 20 episode of Riverdale will serve as the series' first proper Thanksgiving episode. The revelation comes a couple weeks after the teen series debuted its first-ever Halloween-themed episode, so Season 4 really is bringing it in regard to the holiday spirit. However, the promo revealed that, just like the Halloween episode went beyond innocent rick-or-treating, the upcoming episode will be way deadlier than your run-of-the-mill turkey dinner.

Spoiler alert: This rest of this post includes spoilers from Riverdale Season 4, Episode 6, "Hereditary." Not only will the new episode feature Thanksgiving, but it also looks like it may introduce the season's new killer. The promo clip for Episode 7, titled "The Ice Storm," shows Jughead coming face to face with a person in disguise — a Donnie Darko-eque bunny mask, to be specific — holding an axe. Since Riverdale has yet to introduce a masked killer this season, this could be the big bad fans have been waiting for.

The other shocking moment in the promo is Archie being held at gunpoint by someone who appears to be Dodger's mother. The clip reveals that Dodger fell into a coma as a result of the mysterious beating he took at the end of Episode 6, and hints that Dodger's mother blames Archie for the assault. Actually, though, Archie just so happened to stumble on Dodger's beaten body, and viewers have no clue who could have attacked him... although Hiram Lodge seems like a good bet.

And then there's Veronica, who seems like she's going to totally ruin the Lodge family's Thanksgiving dinner, which is totally understandable considering all the drama going on with that fam. Veronica thought she finally got her mob-boss father out of her life, only for her mom to reignite her romance with him. With that, plus her previously-unknown half-sister Hermosa hanging around town, who could blame Veronica for not wanting to make small talk over turkey?

As a treat for the Falice shippers out there, Aguirre-Sacasa also teased that F.P. and Alice will finally have a storyline together this season in "The Ice Storm." According to his tweet, something will apparently go down during their Thanksgiving dinner at Pop's.

Fans will have to savor this Thanksgiving episode, because unfortunately Riverdale will take a short break after it airs. The series will not air a new episode on Wednesday, Nov. 27, so Episode 8 will not premiere until Dec. 4. It's become a tradition for Riverdale to skip a week during Thanksgiving; the show has also done this in 2017 and in 2018.

More like this
These Fake 'Riverdale' Brand Names Are Even Better Than The Real Thing
By Rachel Varina
When Will 'Riverdale' Season 5 Return In 2021? Its Mid-Season Break Is Long AF
By Rachel Varina
Kat Ahn's Quotes About 'The Office's Benihana Episode Call Out Asian Stereotypes
By Dylan Kickham
Stay up to date