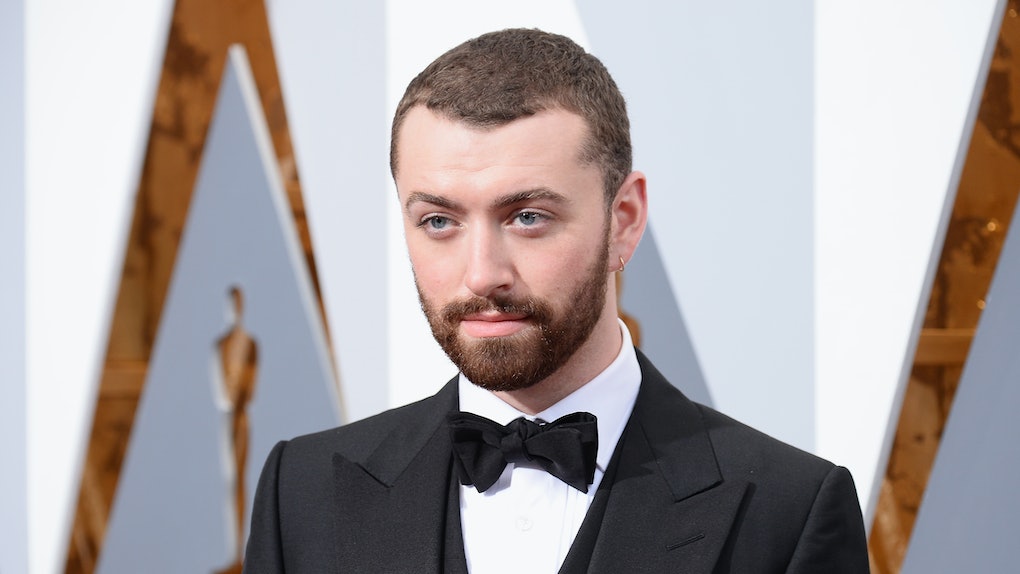 Is 'The Thrill Of It All' About Brandon Flynn? Sam Smith Confirms New Album Is About "Another Guy"

Big Sam Smith news! First of all, his highly anticipated new album is coming very soon and second, Sam Smith is dating and is happy, y’all. While Sam Smith confirmed he’s dating during an interview on Ellen DeGeneres, he didn’t say whether that new guy is 13 Reasons Why actor Brandon Flynn. Although, who else could it be, honestly? Looking at the The Thrill of It All track list has many fans wondering, is The Thrill Of It All about Brandon Flynn?

Time to dive into the limited relationship info Smith told DeGeneres, though there’s enough to connect some dots, I think.

Smith told DeGeneres that he’s no longer single, "which is crazy," he added. He continued: "It's weird bringing out an album and not being single, 'cause when I brought [my debut album] In the Lonely Hour, I was so lonely. But now I'm singing songs about another guy, and I'm quite happy, so it's quite weird."

Another guy? Is his name Brandon Flynn? Of course, Smith wasn’t revealing anything specific, but his recent outings with Flynn, which included holding hands in NYC and catching a performance of Dear Evan Hansen seem to be proof enough that they’re dating.

As for taking a bit of time off from the music scene, he told the talk show host: “It all got a bit too much ... I just really needed to hug my mom and just be with my sisters and go back home.”

DeGeneres explained that Smith needed to “go away and kiss more boys” during his break, which of course she wanted to quantify. How many? “Hundreds,” he joked, adding, “No, not that many, but I did kiss a few men and ran around the streets of London, had a good time. I kind of got back to normal life.”

He added: “My music is about love and it’s important to just take that time to allow your heart to have it a little bit.”

It wasn’t all music talk, however, as DeGeneres got in one of her signature scare pranks on the singer... scaring Smith not once, but twice!

DeGeneres found the perfect opportunity to get the scare in, talking about Smith’s supposed haunted house, which he explained: "I feel like I'm quite in touch with this stuff. I think there's ghosts everywhere.”

But my house is like 300 years old; it used to be a school and I just hear crazy, crazy stuff. My sister, at night, she feels like someone's staring at her when she sleeps. It's weird. But I feel quite friendly with them. I have a good relationship with the ghosts. Sometimes at night I get up and I'm just like, 'Leave me alone.' And they do! I feel like if you just talk to them, like, 'Please! I just need to sleep!'

That prompted the host to ask, "Nothing like that scares you at all?,” as someone dressed as a ghost creeped up next to the singer. She continued, "You're in a house and there's somebody right next to you and staring at you, and nothing in you is frightened by that?"

He answered, "Not really," got scared by her prank immediately following that statement and yelled, "Oh, God. Oh, my God!"

He was clearly not prepared, though he explained that he did think she might pull that and that someone would jump out of the table the guest sits next to. Guess what? Someone did jump out and he was scared a second time, responding with "F*ck! Oh, my God! My heart! I am not singing again! Oh, my God!"

Smith’s album The Thrill of It All comes out Nov. 3. Who else is beyond excited?

More like this
How Bahari Became Instant BFFs After Starting Out In Different Parts Of The World
By Kaitlin Cubria
TXT's Zodiac Signs Prove That Opposites Really Do Attract
By Chelsea Jackson
I Tried Singing While Running Like Miley Cyrus & OMG, My Lungs
By Rachel Varina
Stay up to date