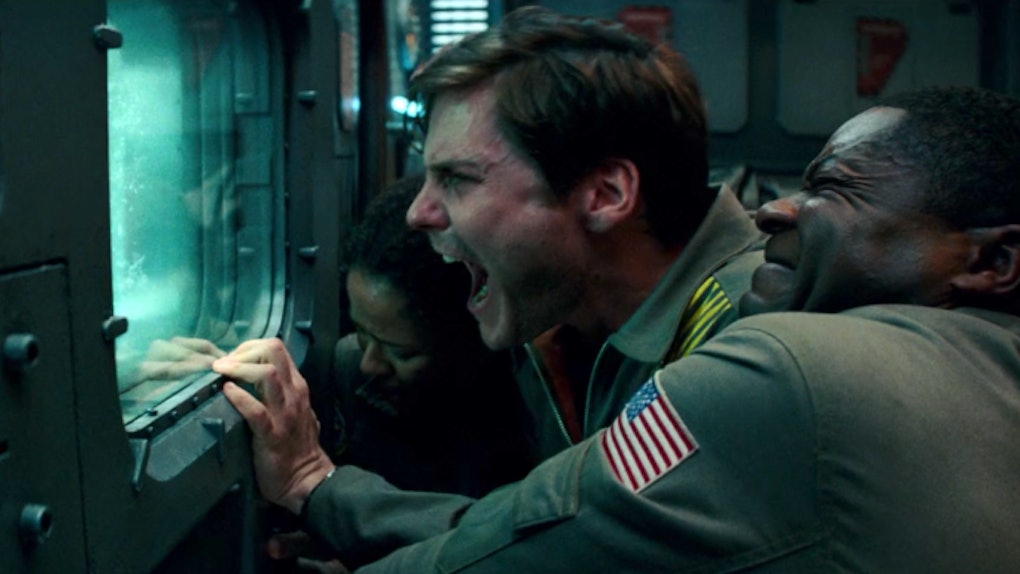 Is 'The Cloverfield Paradox' Scary? Netflix’s Surprise Movie Is A Thriller

The Super Bowl was full of a lot more surprises than just what was happening on the field. Of course, we all know about the bombshell to come out of the Kardashian-Jenner camp right before kickoff (kongrats to momma Kylie), but for movie buffs, the biggest surprise of the night was the unexpected release of a brand new Cloverfield movie. Netflix shocked viewers everywhere with this surprise release of The Cloverfield Paradox during the big game on Sunday night, so now you might be wondering if you should watch is. Is The Cloverfield Paradox scary, and do you have to watch the first two movies to jump into this third one? Let's answers all your questions about the new release right here.

Part-way through Super Bowl LII on Sunday night, the first trailer for the third movie in the Cloverfield franchise popped up on TV screens across the country. The first look was exciting for sci-fi fans, but everyone was really shook when the release date for The Cloverfield Paradox was announced at the end of the trailer. After just premiering its first and only trailer and with no advanced warning whatsoever, Netflix revealed that the new movie was streaming on its site right then and there. Yep — The Cloverfield Paradox is on Netflix right now.

The surprise release has a ton of people wondering if they should check out The Cloverfield Paradox for themselves or now. After all, it was one of the buzziest moments from a night full of huge shocks. Some people may have been scared off from the new movie because they thought it might be too scary for them, but that's actually not the case. The space movie is actually more of a sci-fi thriller than a true scream-a-minute horror film. Sure, The Cloverfield Paradox does include some jump scares, and there is a big monster at the end, but it mostly plays as a space-age sci-fi movie that's more interested in investigating strange futuristic occurrences than hitting you with big scares.

While the Cloverfield Project surprise was one of the most eye-catching moments from the Super Bowl, it actually has not been all too well received by the critics who rushed to their Netflix accounts to watch the flick right after the big game. The first Cloverfield movie was very well received, but this new one is getting bashed by film critics: The Guardian's review called it "an unholy mess," The Hollywood Reporter described it as a trainwreck and a forgettable dud, and Collider slammed it as "a tepid, predictable, and largely uninteresting sci-fi film where dumb characters do dumb things." Still... sometimes bad sci-fi movies are actually the most fun to watch.

The Cloverfield Project is streaming now on Netflix.