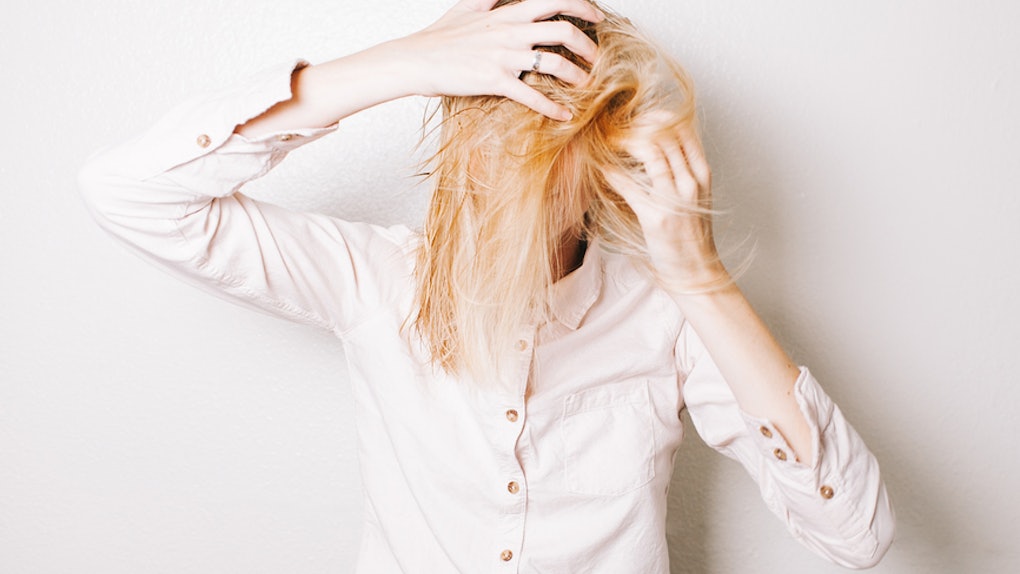 Is Stress Contagious? New Research Says It Just Might Be, But Here's How To Control It

It’s true that naturally high-strung people tend to “catch” stress like a common cold (trust me, I would know), but according to new research, stress could be contagious — like, actually contagious, and it’s not just Type A personalities who are sweating it. For example, think about a time when your mom or dad was stressed at the office and, unintentionally, brought work home with them. I’m willing to bet you felt stressed because they were stressed, and it was possibly one of the most excruciating nights of your life. When you think about it, tensions really do run high in confined spaces.

What’s super curious about stress in general, is that it’s not exactly a disease, or an illness, but it does affect you mentally and physically, in pretty significant ways. Even the American Institute of Stress (AIS) is a bit baffled by this emotion, which it calls a "highly subjective phenomenon" that "defies definition." Basically, according to AIS, stress is an emotional and/or physical response your body has to situations, or change, that make you feel uncomfortable or anxious. There’s also good stress and bad stress, but that’s another story.

New research suggests the stress you're feeling can rub off on others, and vice versa, all because of how this kind of tension affects your brain.

Before diving into the actual research, it’s worth noting that this particular stress study was performed on mice, not humans, so the results are likely not 100 percent conclusive. However, a handful of observations in the past have garnered similar results, showing stress really can be contagious. So, study lead Jaideep Bains, Ph.D. and his team of researchers seem to be right on target with this latest research.

Here’s the short version of the experiment: Pairs of mice (both male and female) were grouped together for analysis. One mouse per pair was taken out of the equation, exposed to mild stress, and reunited with its partner to see whether or not the rodent friend could feel the effects of the other's stress. Personally, I didn’t know mice could feel all the complicated feels, but apparently, both specimens were going through some things, as the study's results showed that each mouse experienced a shift in CRH neurons — aka a transmitter that controls the brain’s response to stress.

In other words, you don’t even necessarily have to be a direct link to your friend/co-worker/family member’s stress to feel the negative effects when you’re around them. It’s kind of like how people say, if you change your mind, you can change your world. Apparently, if your mind is stressed AF, the world around you is going to be a little on-edge, as well. How’s that for a domino effect?

But is stress actually contagious, or will you just sound dramatic saying you "caught" someone else’s stress?

I’ll admit, I’m a little dramatic from time to time, and I’m definitely guilty of taking on someone else’s strife as my own. But, according to doctor of psychology and licensed clinical social worker Dr. Danielle Forshee, chances are, if your best friend is feeling super anxious, it’s not an exaggeration if you start feeling a little jittery yourself. Stress, she tells Elite Daily, can be contagious, as a result of “a brain mechanism that helps us have empathy for people around us.”

Plus, TIME reports that, during a study conducted back in April of 2014, it was found that stress is powerful enough to be passed on to others because of — *surprise* — hormones. The experiment was actually very similar to Bains’, except in this particular instance, the test subjects were human.

In the study, which was published in the journal Psychoneuroendocrinology, participants were paired with either loved ones or strangers of the opposite sex, and divided into two groups. Some were asked challenging questions and underwent stressful interviews, while the remainder watched the stress of their partners unfold. Of those watching loved ones endure stress, 40 percent experienced an increase in cortisol (aka a stress hormone) in their own bodies, while 10 percent of people who were watching strangers in stressful situations also felt a pang of empathy for their anxiety-ridden counterparts, despite not having a close relationship with these people.

Stress may easily travel from person to person, but you can avoid “catching” those anxious feels by paying close attention to your own emotions, and setting boundaries that help keep the good vibes flowing.

If you’re the type of person who, like me, has this dire need to fix people’s problems, it can be hard to separate yourself from a loved one’s stress, simply because you want to help them get through it. But, in order to avoid having someone else's negative emotions affect how you feel, assistant professor of emergency medicine Robert Glatter, MD, tells Elite Daily that taking a step back might be necessary.

Interestingly enough, however, Bains and his team found that when stressed female mice mingled and bonded with other female mice who weren't stressed, the "effects of stress on CRH neurons were cut almost in half." So, the next time you're feeling bummed out because of a co-worker who can't stop talking about an upcoming presentation, it might be a good idea to take lunch with a different crowd.

Another great approach to dealing with this viral anxious bug is to go the holistic route with essential oils for stress. Wellness and essential oil brand Saje has a collection of blends to stimulate feel-good hormones, encourage better sleep, and aid digestion, all of which can impact your stress levels.

Of course, this isn't to say that, when the going gets rough for a loved one, you shouldn't make an effort to ease their mind. Just remember, it's one thing to help solve a problem, but it's another to take said problem on yourself. Between work, school, and social obligations, you have enough going on in your life; any more added stress is just unnecessary.