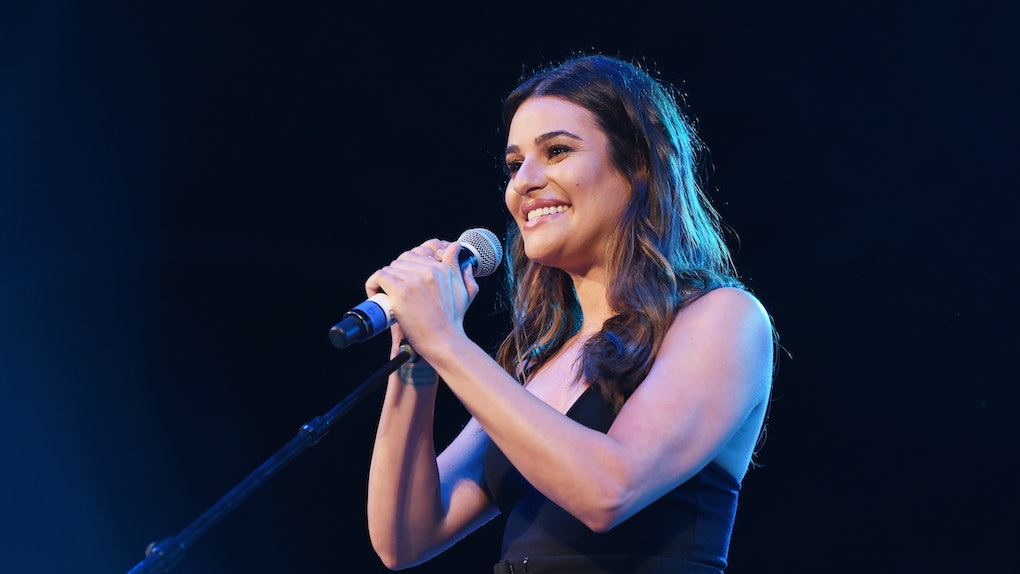 Is Soup Good For The Flu? Lea Michele Swears By Her Go To Recipe

Waking up on the wrong side of the bed in the winter means waking up to a scratchy throat, feverish chills, and a pounding headache. When all signs point to the flu, it can be a struggle making the trek from under the covers to the kitchen counter, let alone making some sort of meal for yourself. On top of prescription meds, worn-in pajamas, and a fresh box of Kleenex, though, drinking a lot of fluids is just what the doctor ordered — but there’s a loophole here. Soup is good for the flu, too, so you don’t have to necessarily drown yourself in water bottles and tea bags alone.

Whether my mom had to pull me out of school after a trip to the nurse’s office, or she took me straight to the doctor if I woke up with rosy cheeks and a fever, lunch was always a cup of soup and a baguette for dunking from Panera Bread. Because of this tradition, I’m convinced the combination of broth, soaked veggies, and damp clumps of bread are the cure to every bug I catch. The Mayor actress and former Glee star Lea Michele agrees, at least, as far as the soup part goes.

I’ve come to find that almost everyone has their staple over-the-counter meds and home remedies they cling to the second they start to feel even remotely under the weather. For me, it’s ibuprofen and broccoli cheddar soup. People reports that, for Lea Michele, it’s a combination of an apple cider vinegar cocktail and her original homemade soup which, sick or not, looks might tasty if I do say so myself.

Michele shared what she calls her “healing” recipe with fans via Instagram story, and it looks so easy to make.

Leave it up to celebs to share their secrets on an Instagram story, and only an Instagram story — aka something that fades into cyber oblivion in a matter of 24 hours. Luckily for us, People came in clutch with a screenshot to relay the 31-year-old actress’ self-proclaimed “flu-buster” that only requires a small handful of ingredients to throw together.

“Just a simple lemon garlic broth with kale and mushroom,” Michele wrote in tandem with an unfiltered shot of sliced baby bell mushrooms and soggy clumps of kale floating in a pool of yellow broth. The combination of herbs, veggies, and liquid, Michele said, is “so good for fatigue” and for fighting the flu. She even added a raised hands emoji for emphasis, so you know it must be good.

Personally, I prefer creamier soups, though that probably defeats the purpose of eating the meal in hopes of a speedy recovery, since they’re usually made with some sort of milk or cheese — but I digress. Michele’s veggie broth, on the other hand, is made up of only good-for-you foods. Mushrooms, for example, have been used in China and Japan as natural remedies for colds and flus because of their ability to stimulate the immune system. Garlic is also rich in antibacterial and antiviral properties, while kale is loaded with nutrients.

Even though there’s no such thing as a surefire “flu-buster,” home remedies like healthy soups can help ease symptoms and make the experience a little more bearable.

The flu is such a nasty, monstrous infection that basically just has to be dealt with until it’s over. Having said that, it’s true there’s no definitive “cure” for the illness, but there are ways to soften the blow of symptoms and make yourself feel a little better. Rather than only relying on medications, some people, like Michele, enjoy going the holistic route with home remedies.

Soup might not be the magic elixir you’re looking for, but a lot of soup recipes are swimming with health benefits your body needs to speed up the recovery process. For one, the hydration aspect is so important, and the steam from hot liquids helps clear up congestion. Plus, according to William Schaffner, M.D., an infectious disease specialist and professor at the Vanderbilt University School of Medicine, when you find comfort in something like homemade soup, “there’s a psychological benefit” that lifts your spirits. Dr. Schaffner told SELF,

There’s [no food] in particular that’s been shown consistently to decrease your symptoms or complication rates of the flu. People just feel better when they have foods that they like.

If Michele's mushroom and kale soup isn't for you, though, there are plenty of other recipes that are delicious, nutritious, and perfect for coping with the flu.

If you’re anything like my husband, and getting you to eat vegetables is like pulling teeth, here’s some good news for you: Chicken broth is bae for viral infections like the flu and common cold, so I guess that urban legend isn’t a myth after all! Chicken broth is loaded with something called cysteine, an amino acid that “helps thin mucus in the lungs,” according to Greatist. Just make sure there's broth underneath all those delicious noodles, OK?

Tomato soups are another great treat to enjoy when you're under the weather. The broth is rich in vitamin C, so a hearty bowl offers the body enough energy to recover after long nights of tossing and turning. And if you don't particularly enjoy the taste of tomatoes, give miso soup a try. Miso is made of fermented soybeans loaded with good bacteria to combat the bad stuff floating around your system. Plus, it stimulates healthy digestion to get your immune system back up and running.

And if you really can't make it off the couch, or loathe cooking anything that requires more than a working microwave and timer, there's always Panera.