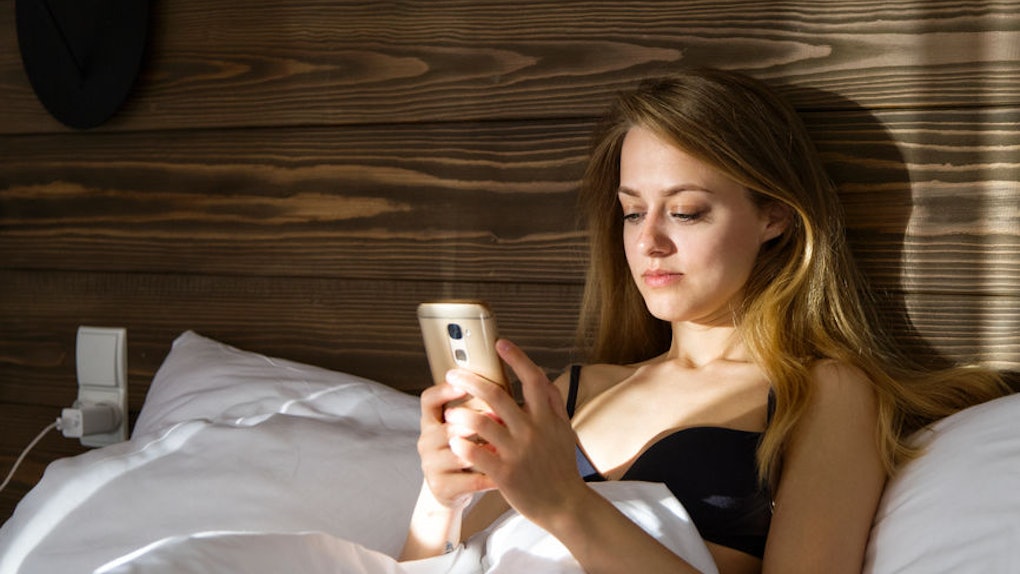 Is Sleep Texting Normal? Here's Why It's Actually A Pretty Common Thing, According To Experts

How many times have you woken up, reached for your phone, still groggy from the night before, and noticed a few select texts you could not, for the life of you, remember sending? And in how many of those instances can you swear you were sober the night before? It turns out, drunk texting isn’t the only way your subconscious sends messages when you aren’t paying attention. According to a new study, texting in your sleep is a real thing, so just in case you were wondering if sleep texting is normal, apparently you’re not the only one drafting messages late at night. Still, you might want to start shutting your phone off before bed. You know, just in case.

Personally, I’ve heard of sleepwalking (been there, done that), sleep talking (that, too), even eating in your sleep (not yet), but never in a million years did I think there’d come a time when sleep texting would be a legitimate thing people do. But welcome to 2018 where clearly anything is possible, right? Not only is sleep texting a thing, it’s apparently becoming a borderline phenomenon across college campuses, and I don’t know about you, but that sounds pretty damn nightmarish to me.

The new study was published in the Journal of American College Health back in July of 2018, but the research actually began in 2013, when a team of researchers from Villanova University asked 372 students from two mid-size universities to complete a survey about whether or not they'd experienced any cell phone use during sleep, and their overall sleep quality. According to the results, 25 percent of students admitted to texting in their sleep in tandem with poor sleep quality. What’s more, the study found that students who slept with their phone close by were more likely to text in their sleep without having any memory of doing so.

I know myself, and I’ve definitely woken up in the middle of the night to a text message or phone call, glanced at the screen all sleepy-eyed, and barely been able to make out what was actually going on. But for someone to physically pick up the phone, write out an entire message, and have no recollection whatsoever of the conversation? It’s fascinating for sure, but the study’s lead author, Elizabeth Dowdell, PhD, RN, FAAN, suggested it might not be all that surprising considering, she told The Villanovan, that "existing sleep research has shown that people who awakened after sleeping more than a few minutes are typically not capable of recalling the last minutes before they fell asleep."

But before you and I get our signals crossed (get it?), it’s worth mentioning that sleep texters aren’t just mindlessly grabbing their phone in the middle of the night with the intention of striking up a conversation. In fact, according to certified sleep science coach and founder of SleepZoo, Chris Brantner, sleep texters rarely initiate the texting convo first.

“Typically, it's thought that sleep texting is not usually initiated by the sleep texter, but instead is a response to a received message alert,” Brantner tells Elite Daily over email. “Odds are that the sleep texter hears the notification during the stage of light sleep where they are easily aroused.”

As for how complicated it would be to text while you’re asleep, Brantner explains that because texting has become almost second-nature to most people, and because sleep texters are typically typing away during REM (aka light sleep) phases, “it's easy enough to automatically respond without even fully waking up.” So basically, your mind is on autopilot when it comes to texting, and if you aren’t in a deep sleep, chances are, if your ringtone sounds or your phone vibrates with a text message, you’re actually pretty capable of responding without having to fully wake up. Am I the only one who thinks this is super cool, but also kind of creepy?

Generally speaking, the bedroom is really no place for your phone, if you want to have a decent night's sleep, and IMO, this just further proves that point. Not to point any fingers, but according to SleepScore Labs’ resident sleep expert and vice president of sleep science and scientific affairs, Dr. Roy Raymann, if you’re sleep texting, it's very likely that you’re someone who, in general, needs to be connected with their phone at all times, and that’s bad news bears for your sleep quality. “Sometimes the behavior triggers one to wake up and cause minor sleep disruptions,” Dr. Raymann tells Elite Daily.

Sleeping with your phone close by just isn’t a great idea, guys. For one thing, the blue light emitting from your screen can mess with your body’s natural production of melatonin, aka the sleepy hormone, so even though it feels like scrolling through Instagram is making you feel tired, the opposite is actually happening, and you might end up having trouble getting to sleep. Plus, according to the 2017 Hartford Home Fire Index, Bustle reports, plugging your phone in to charge and leaving it on the bed while you snooze is considered a "high risk" for starting a fire.

The solution, then, is a simple one: Get your phone out of your sleep space. "If you want to prioritize your sleep, people will get used to you being unavailable during nighttime hours," Dr. Nicky Kirk of The Recovery Doctor tells Elite Daily. "Switch the phone off and be consistent with the routine."