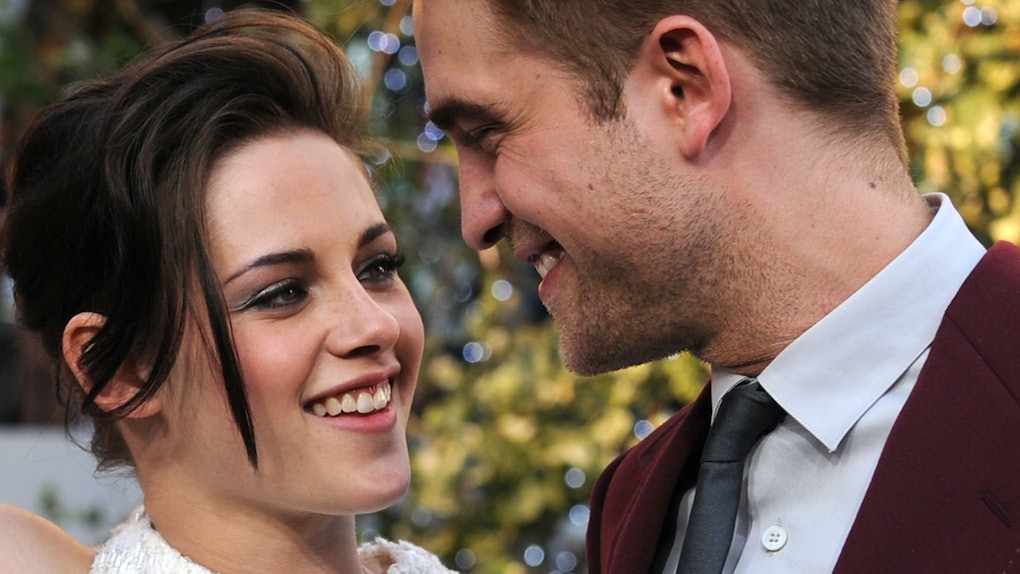 Is Robert Pattinson Still Friends With Kristen Stewart & FKA Twigs? Here's What The Actor Had To Say

Ah, the Twilight era. Twihards ran rampant, Team Jacob versus Team Edward was an incredibly divisive debate (it's definitely Jacob, BTW), and middle schoolers everywhere were lining up to watch the vampire/werewolf-themed series. Twilight gave Hollywood one of its most iconic couples, and even now, six years after their breakup, Kristen Stewart and Robert Pattinson's relationship still makes headlines. After their breakup, Robert began dating FKA twigs until they split in 2017. So, is Robert Pattinson still friends with Kristen Stewart and FKA twigs, now that he's reportedly dating Suki Waterhouse? (Elite Daily reached out to Suki and Robert's teams for confirmation on their reported relationship but did not hear back by the time of publication.) Well, in a recent interview with The Times, Robert revealed where he stands with his exes.

When asked if Robert was on good terms with them, he kept his answer short and sweet — in true Robert form, considering he often tends to keep his private life pretty low-key. He replied, "Yes, yes," which makes sense when you remember that he and Kristen were spotted hanging out in June 2018, E! News reported at the time. He didn't say much else, but he did tell the newspaper that his relationships with Kristen and FKA twigs were definitely not flings. "They were pretty long relationships, not like three months," he said. While Robert briefly talked about his past relationships, when asked about his current reported one with Suki, mum was the word.

"If you let people in, it devalues what love is," Robert reportedly told the publication when asked about Suki. "If a stranger on the street asked you about your relationship, you'd think it extremely rude. If you put up a wall, it ends up better. I can't understand how someone can walk down the street holding hands, and it's the same as when I do it, and a hundred people are taking your photo. The line between when you're performing and when you're not will eventually get washed away, and you'll go completely mad."

Though the actor has kept his lips relatively sealed about his relationships, past and present, that doesn't mean there hasn't been a spotlight on every new potential development. In 2012, news broke that Kristen cheated on Robert after pictures of her kissing her Snow White and the Huntsman director, Rupert Sanders, surfaced, E! News reported at the time. In response to the photos, Kristen publicly apologized to Robert and her fans. "I'm deeply sorry for the hurt and embarrassment I've caused to those close to me and everyone this has affected," she said in a statement. "This momentary indiscretion has jeopardized the most important thing in my life, the person I love and respect the most, Rob. I love him, I love him, I'm so sorry."

While Robert and FKA twigs' split wasn't plagued with a cheating scandal, the two did call off their engagement in 2017 after three years together. "Their travel schedules took a big toll on the relationship," a source reportedly told E! News at the time. "Robert is the one who ended it. They bought a house together but then it was just not working out between them," the source continued. "She moved out." Another source told E! that they reportedly ended things due to "timing" issues and added, "They still have love for each other." (Elite Daily reached out to Robert and FKA twigs' teams for confirmation of these reports. We did not hear back from Robert's team by the time of publication, and FKA twigs' representative had no comment.)

And though Robert and FKA twigs may reportedly still have love for each other, that ship has officially sailed (for now, anyway), since Robert's reportedly dating Suki and has reportedly been seeing her for almost a year. Rumors that the two were dating first began in July 2018 when they were reportedly seen packing on some PDA in London. Since then, they've been spotted a few times being adorable together, but they haven't really talked about their relationship. Here's hoping they open up soon! MET Gala red-carpet debut, anyone??